Everyone knows redundancy is chief when building climbing anchors. However, I have seen several types of anchors that don't appear to be fully redundant due to a single ring providing the master point. 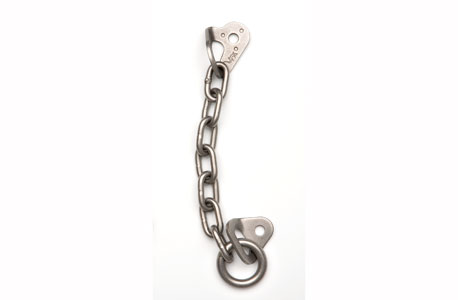 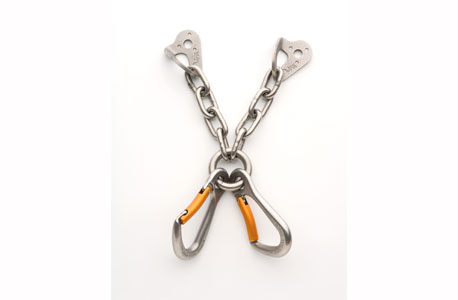 I happen to know for a fact that the steel ring in those anchor set ups is rated to 50kN. That's as much as both hangers combined, they're only rated to 25kN each, which is still double the force any human body will ever be able to produce. The human body is rated to fail somewhere around 12kN which is the amount of force a 1,200kg (2645.5lbs) object would exert on you pelvis if it were resting on your hips. Getting run over by a Honda Civic will do just a little bit less damage to your body than 12kN will. This figure is why most climbing gear is rated to 24kN or 25kN, so they can meet that minimum safety standard of double the force they will ever have to withstand under normal use. Before that ring ever comes close to failing, both bolts will literally shear out the rock, which will most likely never happen. Those rings are the most bomb proof part of either of those anchors, they are the very last thing you need to be worried about.

The answer is: these single point anchors are acceptable when new, and in perfect condition. After they have been misused by climbers lowering and belaying through them, these non-repairable anchors are not acceptable. They WILL be eroded by climbers lowering from grit covered ropes. Don’t kid yourself into thinking otherwise. Every climbing anchor is subject to this problem. That is why EVERY climbing top anchor should be redundant and have replaceable rope bearing components. These single point anchors are unacceptable.

13
Why are there ropes on fingerboards?
11
Anchor without cordelette?
12
Why should the angle in a rope attached to two anchors be 60 degrees or less?
12
Why are unequalised anchors acceptable for fixed-point belay systems used while ice climbing?
11
Learning Anchors - How is single cordelette loop anchor redundant?
14
Is a single strand of webbing unacceptable for climbing anchors?
12
Why static rope rather than webbing for toprope anchors?
7
What kind of ropes are used for very long sport routes (like Chilam Balam)?
3
Redundancy in rappel systems
12
Why are climbing hangers/anchors that thin?