What are the dangerous animals in Southern Nevada

I'm from Florida and I've only ever hiked in the Southeast US.

I don't know if I'm blind, but I can't find a listing of dangerous animals and their profiles. I tried Nevada Dept of Wildlife and Southern Nevada Field Office - Dept of Fish & Wildlife.

I'm planning on hiking Red Rock Canyon and Valley of Fire later this month and I'm not planning on seeking out snakes, spiders or scorpions, but I would like to be able to identify them just in case.

I did take a look at As an experienced backpacker in the Eastern US, what should I know before hiking in the Western US?

as well as Dealing with wildlife in the desert of California/Nevada in general and in the White Mountains in particular, but I couldn't find what I was looking for.

I also checked out What wild animals are there in California that can be dangerous or create hassles, and how do I avoid problems with them?, but I'm more concerned about the little guys.

I found some information on snakes in Snake dangers while hunting in the desert?

Red Rock Canyon & Valley of Fire have very heavy human visitation, so any large predators are likely to be scarce (Mountain Lions & Bobcats).

Coyotes are present, but unless cornered will not give you any problems.

The mostly likely encounter with 'dangerous' wildlife you might have would be with Rattle Snakes. There are several species, some more aggressive than others, found in the Mojave & Great Basin regions, although they are not very active during the colder winter months during which you are planning on visiting, however may seek out warm areas near humans. I have spent several years hiking & camping in the Mojave & have only ever come across exactly 3 rattlesnakes.

Also remember that rattle snakes will not always rattle, especially if cold.

There are several species of scorpions as well, however the stings of most are really no worse than a wasp sting, unless you have immune system issues or a particular sensitivity. (There are wasps too). The scorpion present in southern Nevada with the most potential for a deadly sting is the Arizona Bark Scorpion, it is to my knowledge not native, but I have found them in Las Vegas, most likely an introduced population or a lone hitchhiker. Note the wide body & coloring for identification. Scorpions are also not very active in colder months, however may seek out warm areas near humans as well. 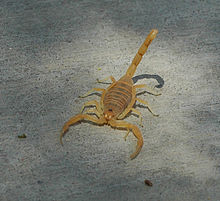 One animal with which people may get into trouble when they do not expect it, are the feral Burros & feral Horses found in the Red Rock Canyon area. These animals are very accustomed to people & may approach hoping for food (don't feed them, it is against regulations), so they are generally not a threat, however, I have seen mother Burros react quite defensively when approached & their offspring are nearby. Aside from that, they may be prone to bite or kick if startled. 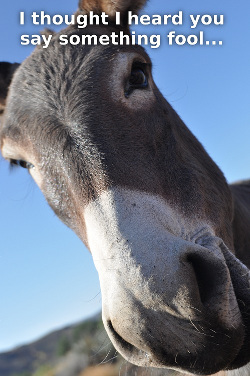 A similar caution should be taken with Desert Bighorn Sheep. Although you are unlikely to get near them, males will act aggressively if they feel they need to defend their herd.

Black Widow spiders & Tarantulas are also present. Though neither are actively aggressive towards humans.

One other thing to watch out for; the Teddy Bear Cholla. If you have an unexpected encounter with one of these, you will not soon forget it! Bits of them will, shall we say stick with you.

Not the answer you're looking for? Browse other questions tagged safety united-states animals or ask your own question.

24
As an experienced backpacker in the Eastern US, what should I know before hiking in the Western US?
15
What are the most frequent crimes perpetrated by people against people in the Great Outdoors?
6
Dealing with wildlife in the desert of California/Nevada in general and in the White Mountains in particular
9
Snake dangers while hunting in the desert?
8
What wild animals are there in California that can be dangerous or create hassles, and how do I avoid problems with them?

6
Dealing with wildlife in the desert of California/Nevada in general and in the White Mountains in particular
8
What wild animals are there in California that can be dangerous or create hassles, and how do I avoid problems with them?
9
Snake dangers while hunting in the desert?
11
Any dangerous animals attracted to fire?
34
How dangerous are kangaroos?
6
Which dangerous wild animals are most likely to be encountered in Western Ghats, India
5
What are the white pvc pipes in the Nevada desert for?
15
How dangerous is it to rummage the ground in the mountains of Nevada desert with venomous creatures out there?
4
Possible dangerous animals in north-west natural parks of the US in late July