What is a longbow?

In movies and other resource there are often "long bows" mentioned. It has become pretty "legendary" imho. Although I know how it's shaped etc. I wanted to know what exactly makes a bow a longbow?

The problem with the longbow discussion is that it changes from country to country.

For example in the UK the longbow and american flatbow are two separate categories. In the UK a longbow is described as such:

The bow shall be the traditional longbow made from wood, either "self", "backed", or "laminated" with cambered (stacked) belly and horn nocks. It shall be not less than five feet in length for an arrow of less than 27 inches and; not less than five feet six inches in length for a 27 inch or longer arrow, this being measured along the back between the string nocks. At no point shall the depth of the bow, measured from back to belly, be less than 5/8 (five eights) of the width of the bow at the same section. The bow may carry no support for the arrow. Bows of bamboo, constructed in conformity with the above, shall be permitted.

The answer to this question is a surprisingly complicated topic due to the fact that longbows have such a great history and different styles.

For example from Wikipedia:

The longbow and its historical significance, arising from its effective use by the English and Welsh during the Hundred Years' War, have created a lasting legacy for the longbow, which has given its name to modern military equipment(.)

I'll cover the current situation around modern longbows in this question. I feel like that any other topic should be part of a more detailed question (for example "What is a self-bow?" etc.).

"A design that when strung the bowstring doesn't touch any other part of the bow but the string nocks."

I'll show the definition of the World Archery Federation here. It has to be clear that this doesn't fully cover the whole "longbow topic".

The bow shall correspond to the traditional form (shape) of a longbow (or American Flat Bow) conforming to a limb design that when strung the bowstring shall not touch any other part of the bow but the string nocks. The bow may be a two piece take-down, having two sections of similar length (take-down within the grip/arrow rest area), and may be made from any material or combination of materials. The shape of the grip (grip area only) is not restricted and centershot is allowed. The bow shall be free from protrusions, sights or sight marks, marks or blemishes or laminated pieces (within the bow window area) which could be of use in aiming.

Please be aware that this definition is used for the modern, competitive longbow discipline.

However, the one thing every different longbow has in common is, that the string doesn't touch the limb in any way. 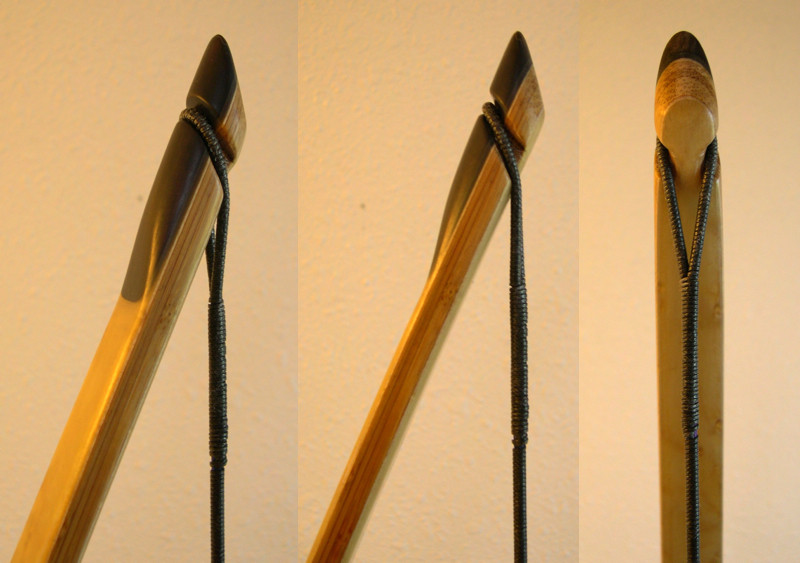 Example of a modern longbow

The modern longbow is pretty well used in todays competitive archery or even to hunt.

The black Hard-Rock Maple riser features limbs overlaid with clear white maple, and backed and faced with high strength black fiberglass. The tips are handcrafted and layered with black and white fiberglass. The leather “shoot off the shelf” arrow rest allows for clean arrow flight.

We can state that the longbow is glass laminated and has a shelf. It's not shot over the back of the hand. Also, the "laminated design" itself is also something to hold in mind. More traditional definitions of the longbow (like the selfbow) discipline prohibit this kind of concept!

The bow in action

To summarize it we've learned that the longbow is a really big topic. However, when it comes down to the modern definition of this bow type, we can see that it's not the "traditional medieval" thing one might assume. It's a fully classified, serious discipline!

Not the answer you're looking for? Browse other questions tagged gear archery long-bows or ask your own question.