Why do you not aim for the head while archery hunting?

In 3D archery and while hunting we're aiming for the lungs and the heart most of the time. At least this is true for bobcats, lynxes, deer and other similar animals.

See this target for example: 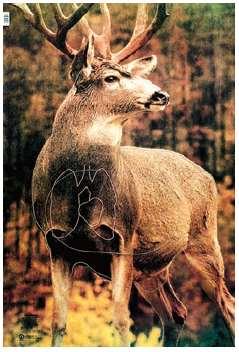 According to films and stuff, the best way to kill a human is to shoot in the head.

Is this true? An if yes, why doesn't this also apply to animals?

Compare a human skull to that of a deer. The human skull is dominated by the brain, so a shot to the head is likely to penetrate the cranium and brain.

On the other hand, a deer brain is very small compared to the skull and presents a very small target. Furthermore there are bony stuctures which might deflect away a bullet or arrow. See this picture of a fallow deer skull. 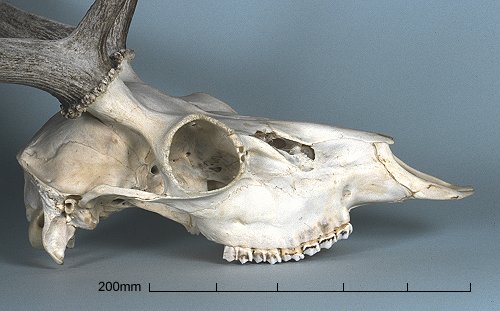 Generally, large muscles need large anchor points, so an animal with strong neck muscles or strong jaw muscles will often have bony lumps and flanges on its skull (e.g. the sagital crest on a gorilla skull).

A sagittal crest is a ridge of bone running lengthwise along the midline of the top of the skull (at the sagittal suture) of many mammalian and reptilian skulls, among others.

In contrast, a deflected shot off a rib is still likely to go on and penetrate heart or lungs. And a big animal like a deer is going to need a big heart and big lungs to oxygenate such a large body.

The head tends to be a harder target to hit than the vital organs in the center of the body, but a penetrating hit there is more likely to take a human or animal to unconsciousness and inability immediately.

That's more important to do to a human who may have a weapon that can hit you back quickly, than it is to a nearly-defenseless animal you are hunting from a distance. However, in general police and military also train to target the "center of mass" of humans, too, as the most likely way in general to incapacitate a target, given that in fighting situations (as opposed to shooting an unmoving animal), misses are very common.

Some large animals and even humans also have skulls that may deflect or effectively stop or reduce the impact of an arrow (or bullet). Combined with the harder target and the chance the animal may suddenly move its head out of the line of fine being greater than them moving their entire body suddenly, the odds of getting a hit that results in an eventual dead animal are greater if you aim for the body.

It does apply, in some cases - it's actually a preference.

For small game such as rabbits a neat little shot to the head with a high powered air rifle will kill the rabbit and save you from having to get the shot out afterwards. This is also most likely with small game that it's going to be much harder to pick out heart or lungs to aim to, the head is a clearer shot.

For larger game there is the choice, deer, as in your example, stand high in the grass and it's much easier to pick out where the heart or lung shots would be.

The reason people often pick heart or lung shots, especially with deer, is that a single shot kill is much more humane, and responsible, than having to shoot twice. The pro to shooting for the brain is the death should be instantaneous, the con is the target size... if you miss you'll spook the deer and it'll flee.

The choice of shot will also depend on distance, bullet, your shooting ability, weather conditions...

As for humans, well, a good shot anywhere can cause us to bleed out and die. It's almost the same preference - a head or chest shot can kill a person, but you're more likely to survive the latter.

This article is quite interesting: outdoor life - where to shoot a deer for one shot kills

The brain (which is the actual intended target) is a small target, a miss of the exact target leads to a very ineffective alternate hit, it moves more, and it is more armored (which on glancing shots can increase the chance of ricochet, this is especially true for archery).

By contrast the "boiler room" heart/lung shot is larger, in significantly less motion at any given moment, and an imperfect shot still has a fairly large buffer of "still decent" hits around it.

For a skilled enough shooter with a fairly close range and a very fortuitous few moments of extremely limited head movement may come across a situation where some of those factors are negated enough where a head shot becomes viable...with a rifle. Even that is a fairly rare set of circumstances, but for archery this is practically never true. Even on the much less moving boiler room area the deer still often jumps/moves between the release of the shot and the impact of the arrow, the standard of accuracy is not as high (it's not common to put 1" groups at 100 yards with arrows...it is with rifles), and the armor of the skull is a significantly bigger problem for arrows (they'll go through on a straight hit, sure, but they are much more susceptible to glancing if they hit angled to the area they impact, which is easy to have happen on such a non-flat surface as a deer skull).

This question arises basically for one reason. Movies are wrong. Any cop or soldier (even snipers) are trained to shoot center of mass. This is because it's far easier to hit, and still highly lethal. The head is a relatively fast moving, and smaller target. The skull also provides much more armour than the ribcage.

As well demonstrated by @mikeagg the brain is a very small target on a deer, and all the reasons that apply to humans apply even moreso to deer.

Not the answer you're looking for? Browse other questions tagged hunting animals bow-hunting 3d-archery or ask your own question.

4
Is a field tip as effective as a hunting tip for small game
7
Why is the US kill rating so different?
2
How to concentrate on a minimal point on a solid surface?
5
What features should I look for in a scope for a .308?
5
I shoot horribly at archery tournaments - what can I do about it?
11
What is pelt sealing and why is it required for certain species?
17
Why are there separate seasons for archery and firearm hunting for deer?
13
Why would archery season be either before or after rifle season?
6
Is a .22 air-rifle powerful enough for a clean kill of a rabbit?