I never adjust for true north. Is this bad practice?

This question (Calculate true north with a compass and map) got me thinking. I rarely bother adjusting compass bearings for magnetic north. Is this bad? I understand the theory but I just rarely bother. It's never seemed to have caused me any problems.

I mostly navigate in mountainous areas, I wonder if this is more relevant in flat featureless areas? Typically the terrain is just as big a navigational aid as the compass (even in low visibility) and the compass points me at the correct ridge, etc.

This map (and the Wikipedia article) will explain why you don't have a problem (in the UK, I'm guessing), but others do, elsewhere.

In the UK, you can ignore it at the moment, but you need to understand WHY you're ignoring it :) 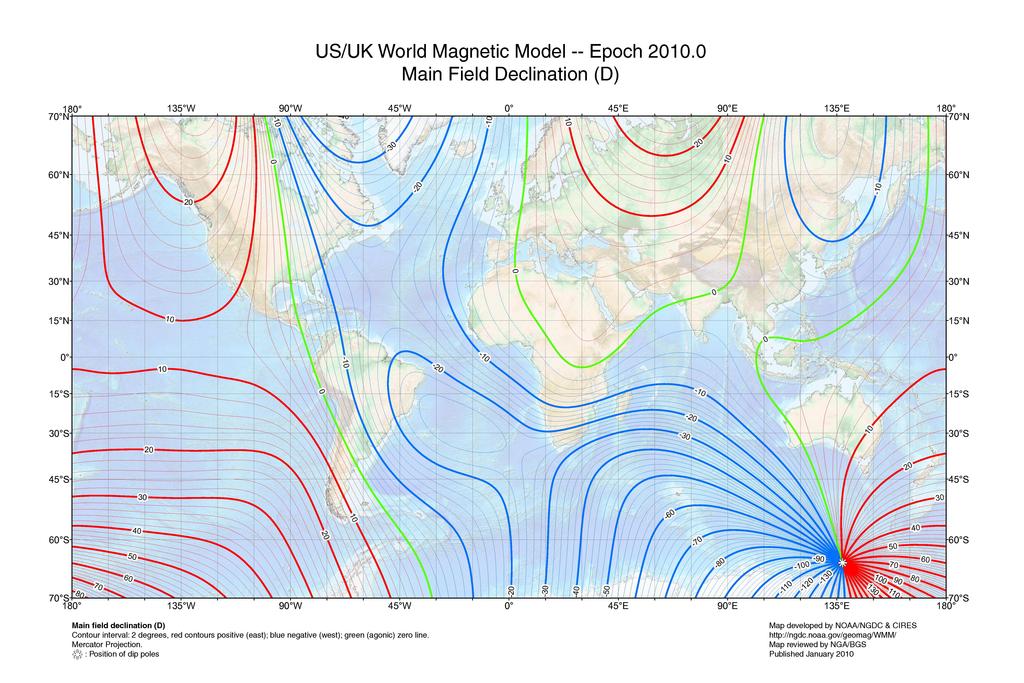 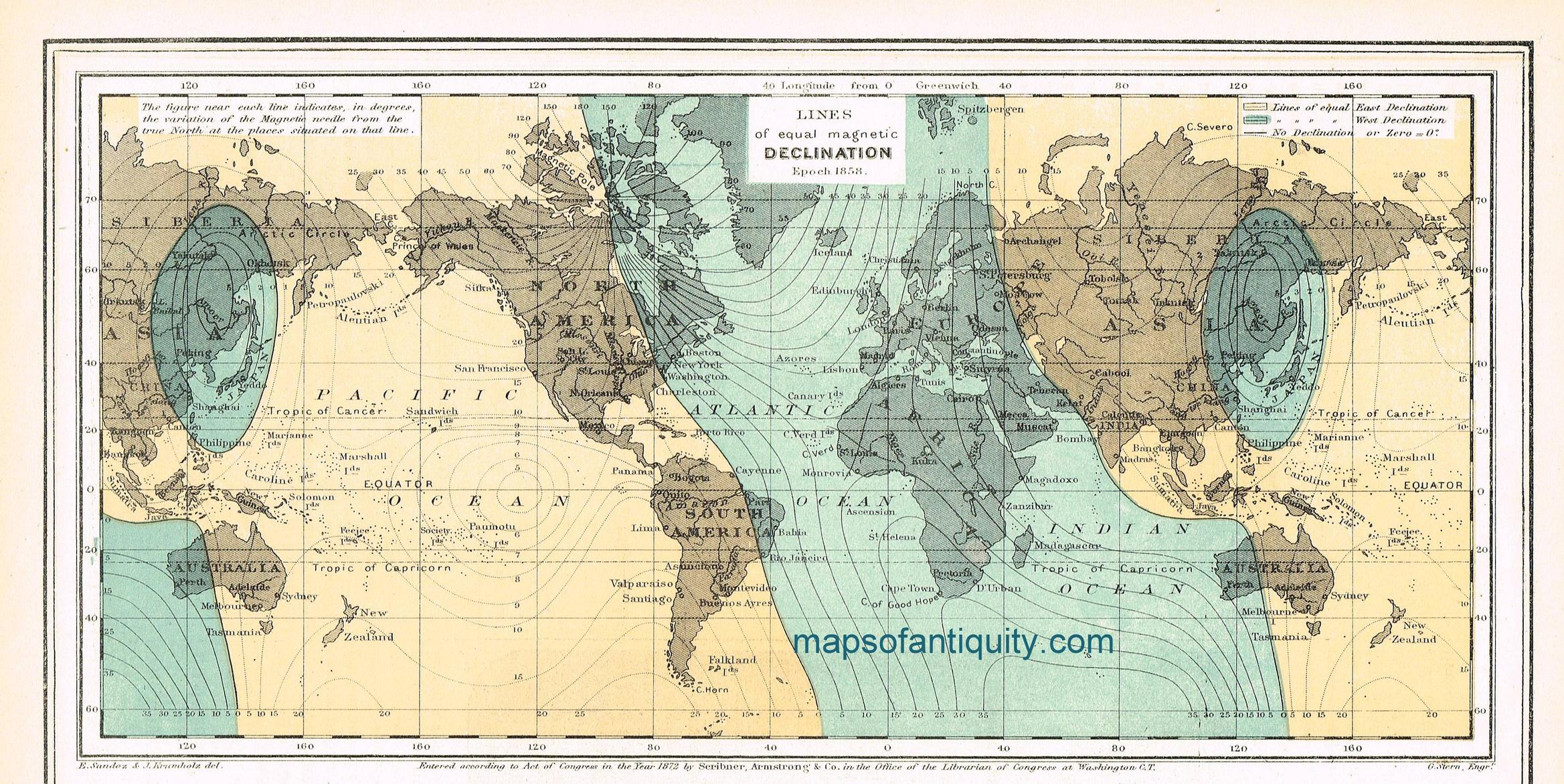 Typically when walking on a bearing you need to allow a margin of error of about 5°. (ie, when 'aiming off', allow at least 5° of error). So the sub-one degree at present in (most of) the UK isn't a big issue.

One thing other haven't mentioned is the precise impact of ignoring the declination. Let's imagine we need to pace 500 metres on a bearing in thick Welsh fog across typical Welsh moorland to reach a bridge on a stream. We know we can't possibly hit the bridge directly, so we need to 'aim off' to a point upstream, and then walk downstream to find the bridge.

You can only follow a compass bearing accurately to within +/-5° (errors both in working the bearing out on the map, and actually following it on the ground. A 5° error over 500 metres would mean we miss our target by about 44 metres (500 * tan(5 degrees)), so we'd want to 'aim off' by that amount as a minimum. Let say we aim off by 50m.

Now, if the declination is 1° and we ignore it, our worst case error angle changes to 6°, meaning we could end up 52m from our aim point - very slightly downstream of the bridge.

But if we ignored a declination of 10°, we'd be up to 134m from our aiming point, and so far from the bridge we'd miss it completely.

Of course, there's one thing worse than ignoring declination: That's adding it when you should be subtracting, or vice-versa. The potential 25° error (10° declination, wrongly applied, plus 5° general error) would put you almost 250m from you intended destination.

That said, we are not talking kilometers here (at least not in general), but on global scales. So whether you have to care or not depends on whether you travel long distances and if not, where you are. The reason why you do not have to care in the UK and most of Europe is, that the current declination is very close to real north. So for visual navigation with lots of terrain features this is negligible. Other areas (northern part of North America) the declination is much higher and adjustment is really necessary. Some compasses come fixly preadjusted for a certain area (bad idea), some can be adjusted by a screw and some are not adjusted at all. So make sure you know which one you use.

The other matter is, that this is subject to change over time. What is written here for different regions might not be true in some years. So if you pick up your navigation gear after a really long pause, you might have to reconsider you declination settings :)

For example, on the line marked 30, your compass would point 30 degrees away from true north.

Olin Lathrop's very good answer to the question you reference basically already contains most of the information needed also your gut feeling about the topic is quite right. So let's look at it in a bit more general way:

Keeping your compass declination in mind gets the more important, the

To take a quite extreme example, we consider the following situation: you want to travel by ship from the southernmost tip of South America (Tierra del Fuego) to New Zealand. For whatever reason, you don't intend to approach New Zealand in a direct course but plan to keep basically parallel to the Antarctic coast line (i.e. on an east-west course following a certain latitude) and do a sharp rectangular turn towards the north once you're in the gap between Antarctica and New Zealand. Your only measure of direction is your compass and since you are on the ocean, there are no land marks to correct your course on the way.

According to Wikipedia the magnetic south pole (which is of course also off from the geographic one) is currently somewhere at the Antarctic coast right opposite of Australia, i.e. shifted towards Australia with respect to the geographic south pole. So if you start in Tierra del Fuego at the southern end of South America and head straight east according to your uncorrected compass, you will in fact travel slightly northwards on the globe. This northwards tendency will increase the closer you get towards New Zealand (and hence the magnetic pole) and – it's just en estimate here, I would have to run the numbers for the exact outcome – in best case you would just hit New Zealand without the intended northward turn in the end while in the worst case, you could miss New Zealand by its northern side and end up in Australia or South East Asia instead.

As others have said the importance depends on your location. In the UK & Europe the correction is quite small, approx 2-3 degrees and can therefore mostly be ignored. Compared to parts of the US where the correction can be at least 15 degrees. This is because the magnetic north pole lies somewhere in northern Canada, so the UK is relatively far away for its inclination.

Given this unless you are traveling long distances over distances in featureless terrain (which is pretty much only going to be at sea), the difference becomes negligible. If you walk 10km in a straight line a 2 degree error only gives about 300m of lateral distance so you don't really need to worry.

Not discounting the existing answers which provide great perspectives. You don't really care where the North Pole is. It is not like there is only one or two, nor is like anything is stable. There are half a dozen north poles and most of them move around regularly and they move a lot (10s and 100s even 1,000s of miles/kilometers).

So what do you care about? You care about where you are, where you want to be, and what you will need to overcome between the two. A compass is one of your tools, and is subject to local variations which also must be accounted for.

Your primary tools is the map, your primary goal is to define your current locations, secondary is to define your desired direction of travel. Putting it all together you orient yourself and the map. Depending on where you are on the globe, a compass may be of no added value (i.e. near either pole).

So not is not bad, to never adjust for true north, just be aware of the limitations of all your tools, and make good judgement on based on realistic expectations of the available information.

52
Is there an organization for adults to learn outdoor skills with their kids?
40
Compass compatibility: Can I use my US compass in Australia?
27
How much distance is there between True North and Magnetic North Poles?
12
Calculate true north with a compass and map
11
When is the best time of year to find the North Pole?
6
How to take a bearing when the geographic coordinate grid is not aligned with true north on a map?

12
Calculate true north with a compass and map
27
How much distance is there between True North and Magnetic North Poles?
6
How to take a bearing when the geographic coordinate grid is not aligned with true north on a map?
4
How to explain unexpected success following a bearing taken from an iPad