How to help a fox with rabies?

Rabies has a phase called "furious phase". The infected animal has symptoms which can directly affect humans.

So, you encounter a fox with rabies on the trail. Are we able to help it (even if it means "kill it")? 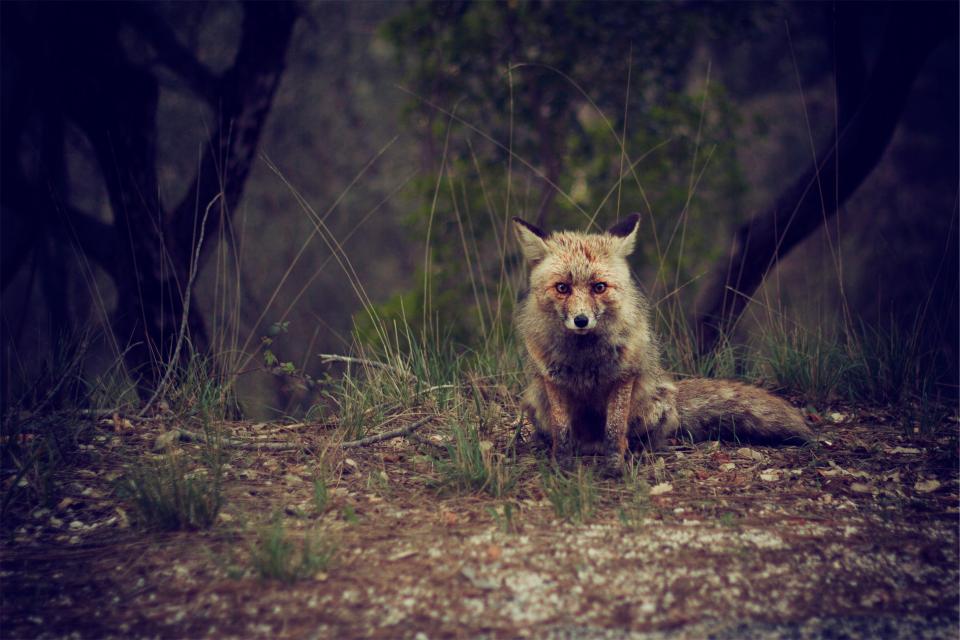 Question: Are we even perhaps able to help it (even if it means "kill it")?

The only way to help a rabid fox, or any rabid animal, is to kill it.

If you have a gun -- and know how to use it -- kill the rabid fox. It is the humane thing to do for the fox, and protects other people whom the fox might harm if you just got yourself away or drove it away.

But be sure the fox is rabid. Just because you see it in the daylight does not mean it is rabid. According to the Humane Society of the United States

Foxes aren't dangerous to humans, except when they are rabid....Luckily, post-exposure treatment is 100% effective if promptly administered.

As to what to do if you encounter a rabid fox and are unarmed, I don't have an answer-worthy answer. A good answer would be very useful.

Once rabies symptoms appear it is generally considered beyond the window for treatment, at least in humans (see: http://www.cdc.gov/rabies/symptoms/index.html).

As ab2 said in their answer, if you have a gun and know how to use it you could kill the animal, putting it out of its misery. For humans who are 'past the point of no return' the treatment is more about minimizing the agony, and for animals in the wild maybe this is the best we can do for them and other creatures who may suffer from their madness.

Unless you are immediately threatened however, I think the answer is to let them be and increase cautiousness. Progress with heightened awareness and warn others as the animal will wander mindlessly and may have infected other creatures in the area as well. This answer is supported by the following link http://www.dec.ny.gov/animals/32131.html which states:

What should I do if I see an animal that appears to be rabid?

Stay away from any animal that's acting strangely, and let your neighbors know about its presence in the area. We do not recommend approaching it with a baseball bat or other club because that would require close contact. Sometimes your local police can come out and shoot it; however, even a sick animal will often wander off by the time outside help can get there. If it does have rabies and has wandered off, it will probably die within seven days, but it might have bitten other animals in the area, so it's a good idea to stay on guard.

Bottom line is: avoid rather than engage unless engaging has adds very little risk, and proceed with caution in any case. Notify others for their safety. If you might have encountered infection, seriously consider seeking treatment, as waiting for symptoms to show up is waiting too long and may be past the point of no return.

Not the answer you're looking for? Browse other questions tagged safety animal-behaviour rabies foxes or ask your own question.

8
How to react to a fox in furious phase (rabies)?

45
How to react to cattle charging towards you?
8
How to react to a fox in furious phase (rabies)?
6
How should one properly dispose of a rabid animal carcass?
7
How can I tell if a wild animal has rabies?
31
How would you help a snapping turtle cross the road?
7
Dos and Don'ts in an area signed with the shield "Rabies! Endangered District" in Germany
10
Is Germany or any of Europe really rabies free?
8
Has a person ever got rabies from a marine mammal?
7
Why does a fox defecate on my patio, which I use as a feeding station for critters?