How can I ascertain the proper harvesting/extraction period for birch syrup for a particular region?

My friends and I plan to go on a road trip, to tap and harvest some birch Tree sap/syrup, from a property up in Quesnel, BC. How do I know when is the right time to harvest?

Sap flow in trees is a result of sap pressure accumulated in the roots during a frost, which is then released when the temperature thaws during the day. Many tree species cannot be harvested because they do not develop high enough sap pressure to bleed (according to Venerable Trees, Inc.).

One farm in BC reports that birch sap is harvested just after maple:

Birch trees begin to run sap about the time the maple trees are finished. Before the buds swell up and burst into leaves – usually when the nights are still below freezing but the daytime temperatures are above freezing – end of February to the middle of March in BC or even into the first part of April, depending on the year.

This is consistent with the average min/max monthly temperatures for Quesnel, BC: 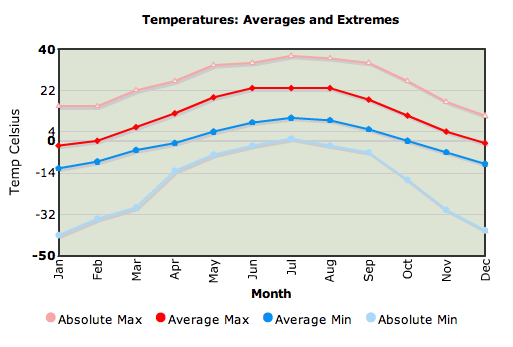 In particular, the University of Alaska Fairbanks says birch prefers a daytime temperature consistently above 50 °F. This occurs about mid-April in that region, but earlier for Quesnel as per the graph above.

10
Protecting Food Supplies from wild animals While Backpacking
12
What are these bulges? Are they harming the tree?
8
Processing the fruit of chequers/wild service tree
5
Is it practical to tap a tree for syrup on an overnight stop?
6
How can I identify Woolly Adelgid on a Hemlock tree?
5
What are these fungi that I've found growing on a dead birch?
5
Is this fungus on a birch tree Chaga?
45
Can removing dead wood harm the ecosystem?
3
What is growing in these cocoon-looking structures found on a mountain in Massachusetts, USA?