How do I connect to an Autobelay with a Whillan's harness?

I got a Whillans Harness for Christmas. As it does not have a belay loop (see picture), how do I connect it to the Autobelay's carabiner? 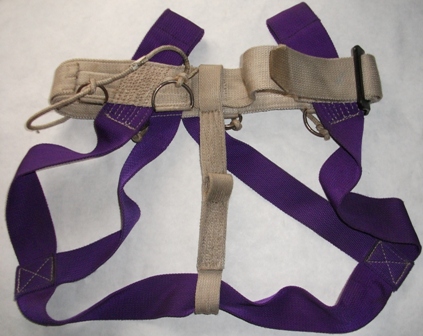 The only thing this 30+ years old piece of climbing history should be connected to is a fixture to mount it in a frame or display case.

That brings back memories - the Troll Whillans was the first modern harness on the UK market and I bought one when they came out around 1970. I think I still have it in the shed.

Before that, we improvised a harness by wrapping tape around our waist and thighs. As befits the hippy '60s, this was called a Swami Belt. 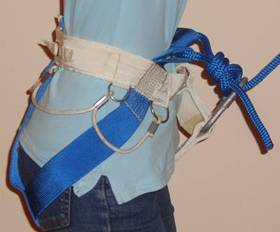 EDIT: if anyone is rash enough to actually use this harness, please note that in the illustration the knot is on the wrong side of the crab - it should be on the live side, not the body side.

Note how the weight bearing crotch strap passes rather close to a delicate area of the male anatomy. This was in the era before sports climbing where leaders simply didn't fall, so I never tried it out in anger. But stories of dire consequences soon circulated and we quickly moved on to other designs.

As others have pointed out, quite apart from the terrible design webbing of this age will be lethally weakened, so for goodness sake don't use the thing. It quite literally belongs in a museum.

Interesting comments. I happened upon this site while investigating a Willans harness I saw on a Jay Leno car. Nope. It is not the same company.

I used a Whillans sit harness thoughout my climbing career, mostly in the 1970s.

I liked the harness a lot and preferred it to my friend's harnesses.

That said, I keep my figure eight knot on the same side of the carabiner as shown in the photo. Under load, this method kept a spacing between the the two top web loops, and the center web loop. The length the climber tied the rope loop adjusted the tightness under load.

If the figure eight knot was used on the outside of the carabiner, the center loop and the two top loops would be pulled tightly together under load, and would be less comfortable.

For rappelling and belaying, I would attached the device to the center loop carabiner. For redundancy, I would also run a small runner or sling from the carabiner, through the two waist loops, and back to the carabiner. This would put some of the load onto the back or waist, from the legs, Unless the load was from straight up. So rappelling was most comfortable leaning slightly backwards, with the load distributed between the legs and also on the back of the waist. The more vertical the body position, the more load on the legs.

In a worst case scenario, if the center loop failed, the two top loops would prevent a catastrophe.

The tie in is incorrect and should go through the lower loop before tying off with a bowline. Remember to double back on the buckle as the webbing has the potential to slip. Despite the ignorent comments, this is still one of the best harnesses conceived, especially when having to put it on in adverse conditions. Should be used with a chest harness, as there was a tendency to flip upside down on occasion.

Not the answer you're looking for? Browse other questions tagged rock-climbing climbing belaying or ask your own question.

15
What is the correct way to attach an autoblock to your harness for rappelling?
20
Why do many climbers appear to not trust their belay loops?
25
How should I vet belayers? What should I look for?
11
Belaying directly off a ground anchor?
7
How to safely use reverso with ferrata harness?
3
Does a Mammut Smart Alpine belay device go well with a Black Diamond Gridlock carabiner? Any other recommendations?
12
Is belaying with a hip belay unsafe?
5
Where can I get little durable cases you can hang on your climbing harness?
5
Why do the GriGri and rope tie into different points on a rock climbing harness?