What are some things to keep in mind when stealth camping?

Stealth camping is the act of quietly finding a place away from people where you can camp for the night and then quickly slip away in the morning without being detected. The key to stealth camping is to remain hidden at all times and to leave no trace of your existence during or after your departure from the site.

I have been starting to plan a cross Canada bike tour. I was wondering if anyone has experience with stealth camping. Any tips or pointers? Things to keep in mind?

(I know that the rules/regulations will be different in different countries/provinces/states.)

Some things to remember when stealth camping: 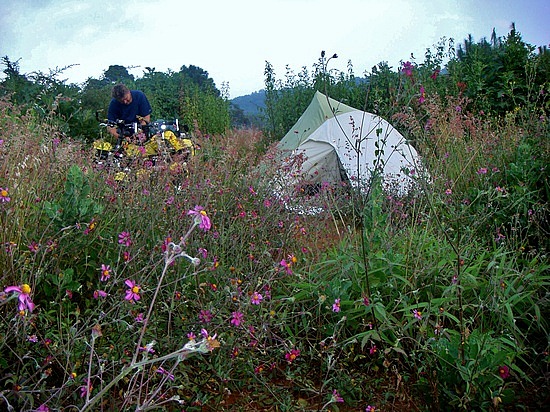 I'm afraid studiohack's advices are too cautious to be useful in practice. For example in Spain or Austria, almost every piece of land is private and/or behind fence, so you'd have to sleep on the track then.

My personal experience (mostly from Europe; please follow here) is that it's not so hot. If you don't provoke the land owners, they are mostly very pleasant and they don't mind; sometimes they even bring food or invite you to their cottage. Sometimes it is better to ask the land owner, sometimes it is better not to ask and find your hidden camping spot after it gets dark. Sometimes you simply have to sleep in prohibited/fenced area. In Spain we slept several times behind fence on the pasture with cows/sheeps (be careful with spanish cows and bulls though...). There are fences everywhere, but mostly just to keep the livestock from going to the road. Many owners do not mind if you open the gate, go inside and CLOSE IT - in fact, at many villages local people do it quite often when they go out for a walk. In other areas, owners might be more sensitive. Depends from place to place, from country to country - it is a good idea to ask locals (but ask in general, don't give any clues to where you will sleep). Even in countries with quite strict rules like Austria I hadn't problems with my approach - once I have to sleep under the sign "Kampieren verboten", once I slept on the land of a police man, who caught me early morning (when he went fishing) - he threatened me a little by going to station, but again, I was kind and explained him my situation (in Deutsch, he spoke no English), he saw I'm a good guy and just told me to get out :) If encounter like this happens, be kind to people, tell them about your problem and I think in vast majority of cases it will be OK.

I'm not telling you this is 100% safe and you cannot run into problems, but what I say - I practice this for years and I haven't met any serious problem. On the opposite, I have many beautiful stories. Yes, it is an adventure, but that's why we are doing it, right?

P.S.: If there is any danger, then it is danger of being robbed when sleeping in cities and their close proximity. Avoid that; this is not an adventure you'd want.

P.S.: so your things to keep in mind:

Before I saw this question, I had no idea the term stealth camping existed, but I have definitely done it a number of times, just backpacking, with a bike, and with a car. Yes, it's possible to do stealth car camping.

I live in the US and most of my experiences have been in New England (where I live) and Arizona (which I visit every summer). New England and Arizona are quite different in what you are allowed to do and what people care you do. Regardless of all that, one thing I never do is camp on private property that is clearly marked to indicate the owner doesn't want you there. The owner has the right to make the call whether they want to allow others to enter their property, and I respect that. However, I take a somewhat different view with public property. I suppose that's just as wrong, but it feels different to me. I'm willing to sneak onto public property where I know I'm not really hurting anything or taking something away from others.

If you think you probably wouldn't be allowed to camp if you asked, it's a good idea to wait until dusk. One time I was on a multi-day bike tour and found myself a little north of Milford NH as it was starting to get dark. There was no public land around I could see. I found a patch of woods that was big enough to conceal me. I stood next to my bike by the side of the road making like I was drinking water until there were no cars coming by and snuck into the woods. I went in maybe 200 feet and set up my tent. It's a really small low to the ground brown tent just big enough for me to lie down in. There was no way anyone could see me from the road. I went to sleep and thought all was well.

In the middle of the night I heard people talking and walking thru the brush. I was suprised by that. It was the only time stealth camping I ever ran into anyone in the middle of the night that closely. They couldn't have possibly seen me, so had to be there for some other reason. It wasn't supposed to be hunting season, but I think that's what they were doing. Or more accurately, they were trying to poach, probably deer. I think they saw my tent or my bike and took off. I kept still just in case anyway. Apparently they were more worried about being found than I was. The next morning I got outta there as soon as it was light.

In New England, land is more managed and controlled than in other parts of the country. The rules in the White Mountain National Forest are pretty strict about where you can camp. I really hate public campgrounds because you always seem to get stuck between a crying kid on one side and a bunch of beer bellied yahoos on the other being rowdy until 2:00am. No thanks. The WMNF does have a few places that are undeveloped sites where you can just pull in and camp for the night for no charge. Of course there are no commodities, but that's fine with me. I'm just looking for a place to plunk a tent for the night.

Unfortunately, the legal free sites are scarce and usually fill up on Friday and Saturday nights. This is where you do stealth car camping. Find a trailhead parking lot to leave the car. The trick is to go in some other direction than the trail to plunk the tent. In the WMNF it is not unusual at all for a car to be parked overnight at a trailhead, so that draws no particular attention. But, you don't want to be caught with the tent where it's not supposed to be. However, nobody looks anywhere but along the trail, and they aren't really looking for illegal campers anyway. Going accross the road from the trailhead is usually the best, since nobody has any reason to be there.

In Arizona stealth camping is mostly pointless since there is so much public land and it's perfectly legal to plunk a tent as long as it's not in the middle of a road. I was used to the east, and the first time I went to a ranger station in the Apache National Forest to ask where I'm allowed to camp, it took them a while to comprehend the question because it was so foreign to them. Generally they don't want you driving off the road (although there are large areas where that is legal too), but otherwise if you're just going to plunk a tent they don't care.

Not the answer you're looking for? Browse other questions tagged camping leave-no-trace biking wild-camping or ask your own question.

75
Where in Europe is wild camping permitted?
13
Tips for travelling through Europe with just a tent