Why are eye friction hitches not commonly used in rock climbing?

It seems that the majority of professional arborists favor friction hitches that are tied with a free cord rather than a loop:

This is often tied using an eye to eye hitch cord like this: 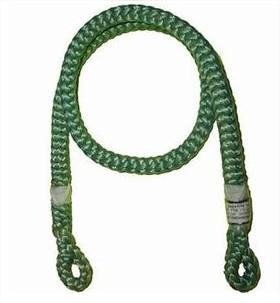 This is a Blake's hitch: 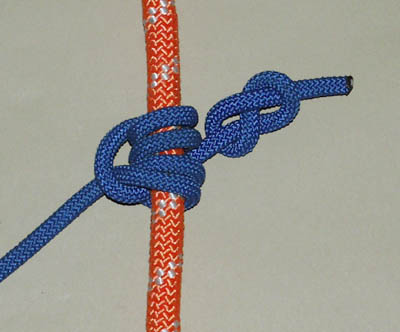 One can also tie an asymmetrical Prusik without access to the end of the rope using one of these cords. As far as I know none of these are popular among rock climbers.

Some people do not carry any dedicated Prusik loops, relying only on runners, but I have seen enough climbers that do. For those that are carrying Prusik loops why not a single or double eye hitch cord?

I find ascending a rope with a Purcell and a waist Prusik challenging enough. If one of these arborist's hitches works just a bit better why not consider it?

I think it is valuable to know that one can tie a friction hitch using the end of the rope itself (Blake's) even if this wouldn't be a typical application; it's another tool in the toolbox.

Am I forgetting other critical uses for a Prusik loop that an eyed hitch cord cannot perform? Are there other practical reasons to choose a closed Prusik loop over these hitches, or is just a matter of different culture and experience? (Splicing eyes is not a typical climber skill from what I gather.)

The main reasons is simplicity and habituation:
A prusik made from a loop is easily taught and controlled. This is a point that many experienced climber forget about often: When people start they may struggle on the basic knots. So for the first thing to learn a simplicity is more important than functionality. And the prusik is a long established and reliable knot. Safety is good too: Just check the knot before use and add a turn if more friction required.

Why do many people stick with it?
The simplicity is reason again, but the other is simply habituation: It is much easier to simply stick with what you learned, it feels "comfortable". Another important aspect is interoperability: You (almost always) climb with a partner and should control each other, so all the knots must be known to both climbers. So you have to employ the smallest common denominator of knots, which is usually the more basic knots.

Other uses are in mountaineering when on glaciers you use a prusik on the cord and hold the sling with your hand. This can then immediately be used for a preliminary anchor. For climbing I do not see any other uses.

Why not the arbory knots you showed above?
I think this is only for historical reasons: Different knots evolved in these two areas that had probably not significant enough overlap to merge. I can do a prusik without a pretied loop (you just need to secure the free end with e.g. a double fishermans). I learned this for a variation of a pulley in crevasse rescue, but it is simply more complicated: You have to do knots on both ends of the cord while in a loop you can just clip into. Here your point of cords with eyes in them comes into play: I simply never saw such a thing in climbing and as you stated I have no idea about splicing. So I guess definitely a culture thing (a friend of mine is arborist and avid climber, never saw one on him either).

Still many people I climb with do use other friction knots. Some do not carry a pre-tied loop for prusiks with the argument that it can only be used for this single purpose and is thus ineffective. They use slings instead. I often use a longer pretied loop to do a knot we call "Englaender-Prusik" (literally: Englishman's Prusik, heard of it as French Prusik too :P, correctly: autoblock, thanks Mr.Wizard) for which you simply wind the cord some times around the rope and attach both ends to a locking biner: Easier and you cannot drop the cord as one end can always stay in the biner.

A climber and aborist should be superbly proficient in a knot or technique before relying on it. An Arborist will spend 100's of hours a year climbing - much more than average climbers, and has more time to become proficient in complex techniques, and uses them enough the advantages are worth the effort. Most climbers on the other hand will climb a few hours a week at most and will rarely use, and therefore loose proficiency in many knots and techniques that in theory are better if done well. i.e. Doing the 'second (or third) best' way well trumps doing the best way poorly.

Therefore, climbers should initially learn and use one way, ideally that can be used in many situations before thinking about alternates. Once experienced is gained, some look for better ways to do things they do often, but rarely worry about optimising things the don't do much - the reward for the effort (initial and ongoing) is not worth it.

Something that occurred to me after asking is that a Prusik is bidirectional, whereas generally the arborist's knots are unidirectional.

I believe the unidirectional knots are easier to both slide up and release, making them superior in a dedicated climbing rig, but their application is limited as well. Following both existing answers emphasizing simplicity and the value of learning one good knot and knowing it on sight it would be poor to teach a unidirectional friction hitch as foundational.

With a unidirectional hitch there is also the small but significant risk of tying it backward and having the knot fail to hold. While this should not happen in a simple ascension system, and it should be apparent soon enough if the knot is not holding, if the hitch is part of a safety system it could potentially be a big problem. Consider for example using the setup in the following diagram taken from What to do when you run out of rope on a sports climb? Is it immediately and unambiguously apparent which way to attach a unidirectional hitch in this application?

Even if it were will one be practiced in tying it in that orientation?

Not the answer you're looking for? Browse other questions tagged rock-climbing climbing ropes knots or ask your own question.

15
What to do when you run out of rope on a sports climb?

16
Should a carabiner ever be clipped to the tie-in loops and should anything other than a carabiner ever attach to the belay loop?
15
Which mid-line knot is best suited for a trucker's hitch?
6
Lowering a climber from above using a belay device in autolocking mode
11
Which bends are binding knots?
6
The dangers of simul-rappelling
7
How to tie a bull hitch using end(s)?
1
Have a couple basic Q's on climbing-line (1 on safely descending/rappelling, another on using multiple lines and/or hardware to achieve "1+1=2"?)
1
Climbing-line "rope-thimbles", unsure how to utilize these (got several 1/2" 'steel rope thimbles' with my climb-rope!)
5
Why do the GriGri and rope tie into different points on a rock climbing harness?
6
Is it safe to depend only on a prusik?