Legal situation for camping in the German Elbsandsteingebirge

Am I allowed to bivouac in the German Elbsandsteingebirge (Elbe Sandstone Mountains)? If no, is it considered as a peccadillo/unenforced law (Kavaliersdelikt)?

In both countries ((Czech and Germany)), the mountain range has been declared a national park.

Yes, there are special places where you are allowed to sleep outside if you are climbing there. And by "outside" I mean without a tent, because these locations are (more or less) weatherproof by having roofs of rock. They usually have a a lot of sand on the ground which makes them quite comfortable.

The local term of such a place is "boofe". They are a bit hard to find, even if you know the location on the map. To be sure, each location should have this sign somewhere: It's usually attached to the rock and very small. 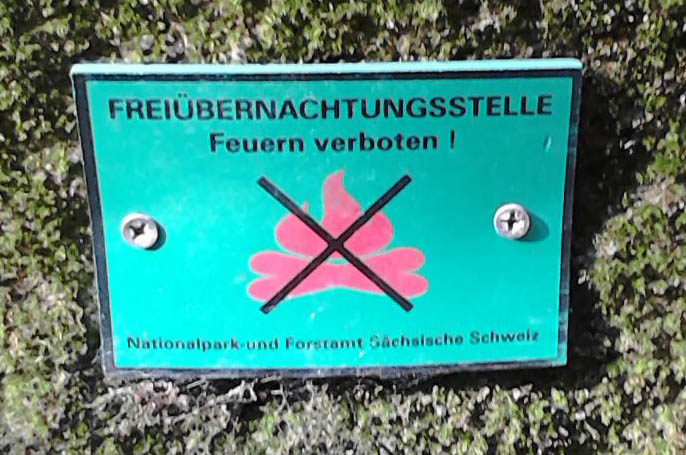 Here is an example picture of such a place: 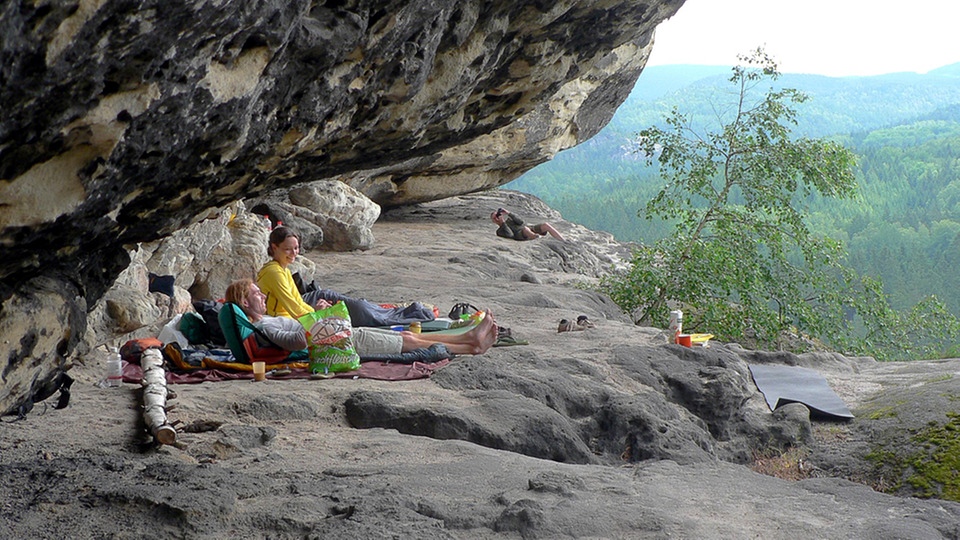 The website of the national park covers this in more detail:

In the National Park it is forbidden to sleep outdoors in the open.

As an exception, and in respect of the tradition of Saxon climbing, it is possible to spend the night outdoors in 58 marked bivouacs only, if this is done in connection with rock climbing activites. All official bivouacs are marked as such. They are located outside the core zone.

I have always been there when climbing or together with people who climb.

There's a (very rough) map of where the locations are on the website and also a German pdf file about what you are allowed to do and what not. As a member of http://german.stackexchange.com I guess that you have the Sauerkraut to understand German. If you need a translation, please leave a comment and I'll add it to my post.

There's also a German website that lists all "boofen" with GPS coordinates. But even with those it can be a bit of a challenge to find them, because the paths leading to them are often not labelled, blocked or marked to be for climbers. Try to acquire a map made by Dr.-Ing. Rolf Böhm which is a beautiful map of the Elbsandsteingebirge that shows many of the paths and rock formations in great detail, which is helpful because a GPS distance only a few meters away might mean that it's actually 30m higher and getting to this location might only be possible with a long detour around the mountain.

It should go without saying but don't make a fire. Leave the place tidy.

I've done it several times, also in winter. It's a great experience, especially when your boofe is higher up, so you have a great view on sunrise.

According to German law, bivouacking (defined as sleeping outside for one night without a tent) is generally allowed in Germany, but only outside from nature protection areas. Camping is generally forbidden outside of designated campsites.

Yes, it is forbidden make a fire, build a tent or sleep outsite also in the national park Bohemian Switzerland. Offical website: www.npcs.cz

Not the answer you're looking for? Browse other questions tagged wild-camping trekking legality germany bivouac or ask your own question.

5
How do permits for US/Canada public land work?
7
Legal permits required for trekking in Canada
10
Legal situation for roving in Sweden
9
Legal situation for Parkour in the EU
12
Am I allowed to "wild-camp" in my car?
33
Why aren't there any electric stoves that can be used for cooking where you can't build a fire?
7
Good two-day tour for the "Trekkinghütten" in the saxon switzerland
4
Legal situation to bowhunt in Hungary for foreigners
10
Is Germany or any of Europe really rabies free?
8
How can I prepare my body for a relatively hard hike?