Does a pound on your foot equal 5 pounds on your back?

I have heard a number of people say that a pound on your foot equals 5 pounds on your back. Is there any hard evidence to support this claim and how does the terrain affect it?

No, this has not been shown in realistic mountain hiking settings. It has only been shown for fast hiking.

The answer by Tullochgorum links a 1984 US army study. It is quoted here (emphasis mine):

The men walked on a treadmill with three different speeds; 4, 5.6 and 7.3 kilometers/hours.

The energy cost of wearing boots was significantly higher at all speeds except the lowest (4 km/h).

I don't think hiking at 6–7 km/h on a treadmill is a good model for how I hike. Most people hike at closer to 4 km/h than to 6 km/h, in particular if they are on long treks with heavy backpacks in mountains or where trails are unmaintained or absent. At such a speeds, there is no evidence that "one pound on your foot equals 5 pounds on your back".

But regardless of whether you believe it's heavier, hike with whatever you consider safe and comfortable. If trail shoes work for you, wear trail shoes. If you find that you prefer strong ankle support (perhaps for those steep descends) and high height for swamp and stream crossings, wear "traditional" higher hiking boots. My impression is that the lightweight shoes are more popular in N-America whereas larger hiking boots are more popular in The Alps or Scandinavia (incidentally, I've found trails steeper in the latter case as well; perhaps there is a link?). In any case, both are available at good outdoor stores so having a "war" between the two camps is useless — nobody is forcing their preference upon others. Or you can even decide to bring both :)

The factor of 5 maybe an exaggeration, but the physics is certainly worth examining.

Consider what is happening as you walk.

Take easy ground to begin with - your pack moves at a fairly constant speed and velocity - essentially the only energy needed from you is holding the weight in the air. On rough ground, experienced backpackers will keep this motion of the backpack (and their torso) smooth and consistent. Even on very rough ground it's surprising how little a backpack moves with little bobbing up and down and starting and stopping. The smoother the pack is moving, the less energy is used changing its velocity. (Novices often have very inefficient carrying technique, stopping and staring each step, bobbing up and down like a yoyo, especially on rough ground.)

The very nature of your feet is your boots/shoes stop and accelerate to twice your walking speed each step. They also have to be lifted and placed down on the ground. None of the energy from one step is retained for the next. Any extra weight on your feet needs to follow the same actions, hence it's very inefficient. The only benefit is half the time the weight of boots is supported by the ground, not you.

On easy ground, the difference is more significant as the backpack motion is hardly changing. Over rough ground, as the backpack needs to accelerate slow down more, and bob up and down (e.g. boulder hopping, climbing over trees etc), the penalty of weight on feet diminishes significantly.

Edit: One thing that must be considered is the nature of the ground and support you need for your feet. At one extreme, a few people can carry heavy weights over very rough ground easily in bare feet. At the other, as I drive a desk for 50 weeks a year, my feet are not strong enough to carry heavy weight over rough ground without support. Therefore although lighter weight shoes/boots are less tiring, the support and protection provided by the shoe becomes more important than weight. It's one thing to walk a few hours in Crocs along a benched track, another to spend 14 days crossing mountain passes and river beds with no formed tracks carrying 20kg back pack.

The source is a 1984 study by the U.S. Army Research Institute, which found that it takes up to 6.4 times as much energy to move at a given pace when weight is carried in the footwear as against the torso.

When I was a kid we all walked in monsters like this, at almost 4 lbs a pair (and that's before they get wet!): 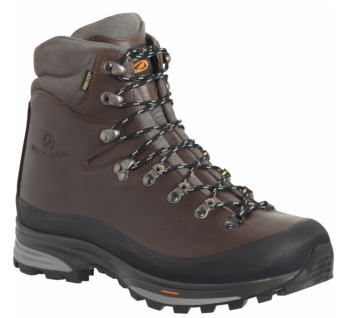 This is the equivalent of around 20 lbs in your pack. I still see a lot of people shod like this, particularly continentals in the Western Alps.

Now (unless it's icy) I walk the hills in minimalist shoes like these, at around 1lb per pair. This is the equivalent of dropping over 15lbs from my pack.

It's been a total liberation. My feet, knees and hips function as they evolved to function, and I'm experiencing far less fatigue, wear and tear. And I've never had so much as a hot-spot, never mind a blister.

Heavy boots are supposed to provide ankle protection, but because they don't allow your power train to function properly I used to experience regular injuries - sometimes quite serious. Walking thousands of miles in more natural shoes, I've never had a problem.

And being able to actually feel the ground beneath your feed adds a great deal of enjoyment to walking, at least for me. I wouldn't want to isolate myself from the ground again any more than I'd want to wear chain-mail to make love.

Of course wearing light footwear does involve some commitment and a change of attitude. You have to transition carefully and rebuild the natural strength in your feet. You have to step lightly and accurately on difficult ground. You have to lighten your pack. You have to pick the right shoes for the job, or adapt them to the terrain with removable rock-plates. It's all part of a more lightweight approach to moving and living in the mountains.

For me there's no turning back. I've walked long distances over tough terrain, and as I've built my strength and skills it's become an integral part of my enjoyment of the hills.

Regarding energy expense, there is already a good answer. However, I want to add that when considering "Does a pound on your foot equal 5 pounds on your back?" there are more factors at play than just energy expense. You should also consider the effect on knees and joints. As an example - If I put 5 lb weights on both my feet and went up and down stairs for a while... though tired, my knees would be fine. However if I put 50 lbs. on my back and did that, my knees would not be okay (I have done this test). Weight on your feet does not impact your knees the same way as weight on your back.

When it comes to wear and tear on the joints and ligaments that support your body, a simple rule like this is not sufficient.

This saying appears to be mostly common sense or "homespun" wisdom, but there are some studies that have tried to dig into it:

This HowStuffWorks Adventure article mentions Hillary's ascent of Everest, as well as the Army study mentioned in another answer here. The general consensus is that yes, mass on the feet incurs more cost in energy to move than mass on the back (between 4.7 and 6.4 times as much).

Keep in mind that while it may be true that weight on the foot will take more energy to move than some multiple of weight on the back, there are more factors to consider:

1) First and foremost is ankle support and foot protection. If you are overweight, your pack is heavy, or the terrain you are travelling on is very rough, you may want more support and protection for your feet and ankles. This naturally leads to wearing heavier footwear. Your level of training, both in technique and in strength of your ankles and feet, will make a difference in how light of footwear you can get away with.

2) The three heaviest items for backpacking don't include footwear. Look first to reducing the weight of your pack, shelter and sleeping bag plus pad. Even shaving off a pound in footwear won't get you anywhere near the savings of going lighter in the big three. And doing this first may allow you to go with lighter footwear as well.

3) Your bodyweight may also be a factor, and not just for what footwear you choose. I wasn't even very heavy, but dropping 35lbs of fat was the equivalent of halving my week long backpack weight! And it pays off every day on being easier on my joints and I'm in much better health overall. Plus, being at a lighter weight and having strengthened my ankles and honed my hiking technique, I can choose lighter footwear.

Footwear manufacturers are trying all the time to reduce weight, so just looking at a big bulky boot and saying there is no place for it is unwise; how do you even know how much it weighs? How are you looking to put the footwear to use? Even many safety boots these days are being fitted with carbon fiber instead of steel for toe protection and shanks (which can be useful on certain mountainous terrain).

I personally try to go as light as I can to the point of using approach shoes or trail runners for 20+ mile day hikes. I've seen guys do highly technical rugged day hikes in Five Fingers (the old ones, not the newer thicker ones) and other guys hike week long back pack trips in Tevas. That being said I still keep my heavy high top boots for things like snowshoeing, and for serious winter mountaineering, I have double-walled plastic boots. Having a shank and steel toe is not necessarily a bad thing; in particular, stiffer soled boots will edge better. See "Freedom of the Hills" section on boots for more details.

Not the answer you're looking for? Browse other questions tagged backpacking footwear or ask your own question.

42
Why do so many people hike with such light footwear?
1
Is it worth it to switch from Osprey Atmos to Exos to save weight?

20
Bear bags vs Bear canisters: which is better?
17
How long does mayonnaise last unrefrigerated in the back-country?
13
Are there boots made for a longer 2nd toe?
9
Minimizing impact of small groups on wilderness areas
2
Hiking boot help
14
How can I tell a “trail shoe” from a regular sport shoe?
9
What are differences between higher and lower shoes other than ankle support?
53
Are there any advantages while backpacking to hike during the night and sleep during the day?
2
Is there any evidence that bears use (or used) cub labor to get food from backpackers?