Any reason to carry a mug outside of the backpack?

We all know this typical Hollywood hiking backpack with an attached sleeping bag and a dangling camping mug. 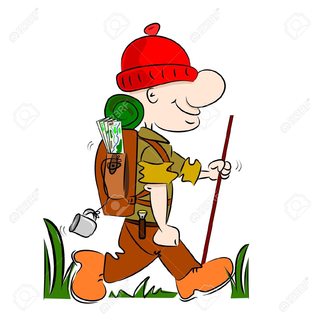 As I currently build a custom backpack, I wondered if there is any good reason to leave the mug outside of your backpack?

If your mug is wet, why would you put it inside?

Many people don't carry anything to dry mugs/cooking equipment anyway.

A mug outside the backpack is far easier to reach.

In some areas, you will pass streams very often. During my first ever backpacking trip, with a group of Swedish people hiking Kaisepakte – Pessiskåtan – Lapporten – Tältlägret – Abisko in September 2005, most people had a mug hanging outside so that they could reach it immediately. Every 5 minutes or so, we would cross a stream and people would drink a few draughts. I believe some of them did not bother to carry a water bottle at all, as we were probably never more than 500 metre from a stream during this hike.

In fact, Swedish mugs often have a hole specifically for attaching the mug outside the backpack: 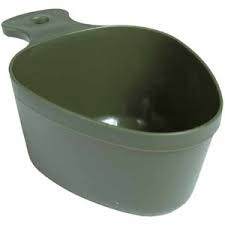 I imagine it's considerably less useful in desert areas or in areas where it is essential to filter water before drinking.

I can't think of any good reason to leave the sleeping bag outside though, unless there is no space inside.

(Incidentally, when I for the first time saw the advice that one is not supposed to camp near water sources, I was somewhat confused, for taking this rule literally would render large areas of the Scandinavian mountains off-limits for camping)

Personally I don't do that, because having something clanging against my pack (or my back) all day is guaranteed to drive me insane. Eating equipment goes inside my pack, along with stoves. If I need a drink during the day, I have a water bottle. If I run out of water and find a stream, I fill the water bottle. No need for a mug during the day.

Hollywood (and others) may make the superficial assumption that a mug is bulky, and having it outside the rucksack saves space. Not so; a mug is hollow, and is a perfect place to put stuff which needs a little extra protection inside your rucksack. All those things would need space anyway, so the only extra space is the thickness of the mug wall, which is negligible.

Also the "sleeping bag" on top will usually be a roll-mat to insulate you from the ground during the night. You lose heat an order of magnitude faster from conduction with the ground than from radiation through the sleeping bag, so every competent camper has something to keep them from direct contact with the ground during the night, and these days it will be a foam mat which can easily be strapped to the outside of your pack. Your sleeping bag stays inside the pack where it will be protected and dry. Historically that "roll" on top would probably have been a bundle of blankets with a tarpaulin cover, where the blankets would have been used both as a basic mattress and as a covering depending on need (old-time camping skills also included improvising mattresses from brush/grass/ferns/whatever), but those days are long gone.

I was taught since I was a kid to make noise while hiking, tends to keep animals away from you, snakes were I was and bears where I live now. Later I learned that whistling or a bear bell are also useful to warn hunters you're around. Whenever I saw people with the mug hanging outside their pack I always heard the "cling-clang" noise so that could be one of the reasons

When I go hiking, I keep a mug of evidence, as there are 2 reasons for this:

First things first: Please hang a metal or plastic "mug" (although don't be so literal you think a glass or ceramic "coffee mug" is what's meant by a "hiking drinking vessel") on your belt or pack!

I like "getting presents" when I hike! Not kidding: I have picked up everything from a hand-carved wooden "drinking noggen" made by a well-known Native American artist, along the Appalachian Trail; through metal "carabiner mugs;" four or five hook-handled mugs; maybe eight plain "tin-cups;" many plastic or silicone cups; a few telescoping metal (or plastic) cups; and (at different times & locations) two full USGI canteen/cup/cover combo sets that had metal belt-clips that'd not been properly fastened.

I think I've found a several more than two dozen "drinking vessels," not counting a literal stuffed-trash-bag-load of crushed disposable drinking-water bottles that "Chechako Wachicu" (Native American descriptive terms) hikers tossed along trails. Plus several fixed and folding knives; many packets of food; camping stoves; a down sleeping bag; and several wallets (which had been mailed back, cash & credit cards intact---although none of them had the courtesy to return a reward!!!) People are certainly careless!

I must also say, many people are no fan of noisy hikers, or campers. There have been times when other campers said they wanted to go into a stranger's camp and drive an axe through the boom-box, after too many straight hours of being forced to hear the same CD, combined with the stink from the exhausted batteries they were burning in the firepit!

(In fact, several California campers reportedly think Tanya Tucker CDs attract "Bigfoot!" It was said to me by a forester that a group of campers had been afraid of bear invasion of their camp, and had left a "boomer" on all night, endlessly repeating a Tanya Tucker CD. Around zero-dark-thirty, one or more "Bigfoot" allegedly showed up, roaring and beating big sticks on trees, as well as throwing sticks at the tents, and pinecones at any campers bold enough to show face, until the inconsiderate louts broke camp in the dark and ran for the trailhead.)

Most Native Americans and "hillbillies" contend government claims about unsafe water are vastly exaggerated. An overwhelming number drink from any source of "mountain wild-water" they encounter without filtering or chemical purification, without getting ill. Most Scandinavians, as well, believe that cold, moving, water sources cannot support the Giardiasis protozoa, too.

In truth, I've never met anyone who's been able to describe having had a genuine case of Giardiasis to me, that was provably contracted in this country. In the USA. This protozoan disease causes extreme stomach and bowel-pains, sulphurous belching, and projective elimination lasting many hours. Those who'd alleged having caught "Gardia" described a couple bouts of mildly upset stomach and loose bowels, and other symptoms of food poisoning. Many also noted eating mayo sandwiches and/or "white" salads that had been out of refrigeration for the better part of a day!

I've met other travelers, who've remarked encountering the authentic Giardiasis in Mexico and Latin America, Africa, the Indian subcontinent, the Middle East, and across Asia. (Conversations with them are like "You think YOU'VE had it bad? Lemme tell you about MY case!") But not so in the continental USA. I'm not saying the disease doesn't occur here; but that I've not met any former victims.

Something else worth considering: Some outdoor writers, a few of whom who have even published books on the subject, claim that Giardiasis symptoms don't appear in either "30 percent" or "over a third" of those who contract it. They didn't show their proofs, although this is common among writers, any more. [Thomas Elpel, in "Primitive Living, Self-Sufficiency, & Survival Skills," espouses the "30 percent immunity" theory, for example.]

It's a holy mess! Whom does one believe? The government? Scandinavians? Native Americans and traditional woodsmen? Published authors? The clerk at the mountaineering shop? Momma?

Just to round things out, here's my stance: I never treat cold, moving, wild-sourced water. I never get sick. I will, however, always treat warm, still or standing, wild-sourced water-- especially in farming country. I carry a carved wooden "noggin" in an over-shoulder "Possibles bag," along with trail-snacks and what I might need to get to in a hurry.

30
How do I tie a sleeping bag to my backpack?
11
Where to carry a folding knife when hiking?
22
How to store a backpack while sleeping?
13
Adjusting the Torso setting for the backpack
13
Why are backpack waist straps so long?
18
Effective way to carry a sleeping mattress with rucksack?
25
Am I packing too much for a 2-3 day hike in the forests?
11
Best knot (hitch) to backpack webbing
11
How is a backpack supposed to fit on the shoulder?