Why aren't there any electric stoves that can be used for cooking where you can't build a fire?

There are quite a few countries where you aren't allowed to make open fires in the great outdoors (I'm sure for at least Austria and Germany). I wondered why nobody has yet thought about electric stoves?

As you can't use common gas stoves (cause open fire/flame), you could use battery powered stoves without a flame.

As Olin Lathrop wrote, the big problem is energy density: hydrocarbon fuels simply offer a huge amount of energy per unit mass, compared to any current battery technology. To put some numbers on this, we can look at Wikipedia's page on energy density. Let's compare ethanol (probably the least energy-dense of the commonly used camping stove fuels) with non-rechargeable lithium batteries (the most energy-dense of current battery technologies).

Ethanol fuel provides 26.4 MJ/kg; lithium batteries provide 1.8 MJ/kg -- less than one-fourteenth as much per unit mass. So if you had 100 g of ethanol (about 127 ml) for cooking purposes and wanted to substitute it with electrical power, you'd need about 1.4 kg of disposable lithium batteries. If you want rechargeable lithium-ion batteries, you'll need about 2.8 kg of them (the energy density is about half that of disposables). As gerrit pointed out in the comments, you also need to think about power density: even if your battery contains enough energy to cook, it might not be able to output that energy fast enough for practical cooking.

Battery technology is improving all the time, but there are no technologies currently in development which would give anything like the order-of-magnitude improvement needed to make them competitive with hydrocarbons for energy density.

So it's not ideal, but is it feasible?

It's clear that batteries are far less energy-dense than hydrocarbon fuels, but that doesn't necessarily mean that they're a lost cause -- perhaps the extra weight would be small enough to be manageable, especially if you're hiking in a German forest where the only alternatives to flameless heating are breaking the law and eating cold food.

I'll start by picking a battery pack, then look at how much cooking we could get out of it. This E-bike battery pack is currently retailing on Amazon for around 277 USD. Its vital statistics are: 24 V, 11 Ah, 262 Watt-hours or 943 kJ of energy capacity. It weighs about 2.3 kg and can output 15 Amps of continuous power, which gives a maximum of 360 Watts. (I specifically looked for an e-bike battery pack, since they tend to be designed for relatively high power output.) For cooking, let's keep it simple and decide that we just want to boil water, which we can then use for beverages, instant soups, noodles, dehydrated meals, and so on. So we can attach the battery pack to a 24-volt electric immersion heater like this one. It's rated at 200 Watts, well within the capacity of the battery. I don't see a weight specified on this one, but other similar heating elements I've seen online weigh under 100 g, so our whole electric heating set-up is under 2.4 kg.

Whether this is practical or not depends on the circumstances and personal judgement. On a two-day hike, this set-up would give you at minimum a hot drink every morning, and a hot drink and hot meal every evening. If you can manage on 560 ml of boiling water per day, you could even stretch as far as four days. The 2.4 kg would probably be unthinkable for a hard-core ultralighter, but it's clearly not an impossible weight to carry. For longer hikes, of course, it swiftly becomes impractical. At this point you probably have to start thinking about solar panels for recharging in the wilderness :-).

Things are getting better (but very slowly)

Lithium-ion technology has been on the market since 1991, with variable but fairly continuous improvements from one year to the next. Energy density tends to increase, on average, by a few percent per year. This makes for significant improvements in the long term: as the graph below from Masias et al. (2013) shows, energy density of the common 18650 battery cell improved by a factor of more than 2.5 between 1991 and 2013: 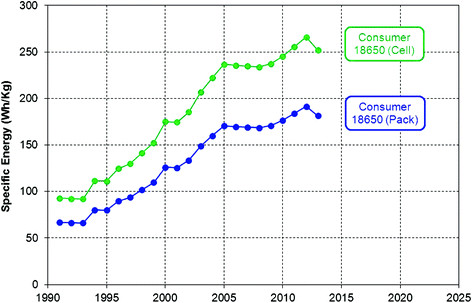 We can probably expect these marginal improvements to continue at least for a few years more (Tesla seem fairly confident about it, for instance). So our 2.4 kg weekend water-boiler will probably come down below 2 kg in the foreseeable future, but beyond that it's hard to say. Even if lithium-ion energy density could continue to improve indefinitely at 10% per year, it would take over two decades to catch up with ethanol. Would-be electric hikers might do better to pin their hopes on the development of some entirely new battery design. There are plenty of research groups working on potentially revolutionary new battery technologies, but potentially is the key word here: very few bright ideas survive the long journey from notebook to laboratory to factory.

There are no electric backcountry stoves because there aren't long enough extension cords.

Seriously, where do you propose to get the energy from? Batteries of current technology don't have the same energy density by weight or volume as chemical fuel does. Battery technology is advancing rapidly, so some day this may no longer be the case, but today it is.

Put another way, you wouldn't want to lug the batteries around it would take to power your electric stove, so we're back to long extension cords.

I didn't have time yesterday when I wrote this answer, but here is a more detailed analysis of batteries versus chemical fuel for a backcountry stove.

I couldn't find exact energy density values for "Coleman fuel" as I had intended, but gasoline should be close enough. 1 liter of gasoline contains about 32 MJ of energy, has a mass of about 730 g, and weighs about 1.6 pounds. It requires a container, so lets say overall it weighs 2 pounds.

If you were serious about using batteries to run a backcountry stove, you'd want to use rechargeable batteries. I think few here with a decent environmental ethic would want to use up and then throw out a bunch of single-use batteries each trip.

Today (Feb 2016), probably the most available and accessible rechargeable battery with decent energy density is some type of lithium in 18650 form factor. These have a service voltage of around 3.5 - 4.3 V over a discharge cycle. You can today get various cells rated for 5 Ah from no-name companies. Reputable companies promise about half that, so the 5 Ah figure is rather suspect. Still, lets go with that to be as optimistic as possible. Let's also say the average discharge voltage will be 4.0, which is again optimistic. That results in 20 Wh, or 72 kJ per fully charged battery. It would therefore take 444 batteries to deliver the same energy as the liter of gasoline.

These batteries have a mass of about 50 g, so that's 22 kg of batteries for the 730 g of gasoline. That's 49 pounds weight compared to 2 pounds for the gasoline in a container, or about 24 times heavier.

Volume is another issue. These batteries are cylindrical, 65 mm long by 18 mm diameter, for a total of 16.5 ml each. They can't be packed without some space between them, but even if they could, the 444 batteries would take up 7.3 liters of space, probably more like 10 liters in reality.

Let's say the minimum fuel you'd ever want to take with you would be 100 ml gasoline. That's barely enough to boil one pot of water with most stoves, and in reality I think nobody would take that little. However, let's compare that to the batteries anyway. That would be 44 cells with a mass of 2.2 kg, weighing 4.8 pounds.

Of course this is a personal judgement, but for me that would be "too heavy and too large" to be worth it. I'd either carry the gasoline or do without a stove.

Battery powered stoves and ovens are available, but they don't get as hot as a regular oven. They are designed to plug into a car's 12V outlet, so they need a car battery, which is impractical for someone on foot. As a result, they are not designed to be light weight. They work for car camping, though. In the US, they are often used by truckers living out of their vehicles for days at a time.

You might be able to rig up a way to power one of these appliances from a lithium ion battery, which might make the weight acceptable to a hiker willing to carry significant extra weight. But for that, you'd need to talk to an electrician, not me.

As others have pointed out, the major problem with electrical heating methods is that they require a lot of energy, and current battery technology is a long way off being able to hold that energy in a comfortably portable unit.

Since your main objective seems to be to get hot food / water while camping where fire/flames are not permitted I'd suggest you look into non-combustive chemical heating pouches. These flameless ration heaters release enough heat over several minutes to heat up a pouch of food or water - it's a far cry from a freshly prepared fry-up, but it might be the best you can get!

As we saw in other answers, current battery technology would require about 1-2 lb of battery per half-liter of boiled water (or simply, more battery than water). The only practical way we have today of getting enough electricity for a reasonable weight would be to use a hydrogen fuel cell. They are gradually getting smaller and less expensive, so you might be able to use one, someday, if you're young enough (today), or wealthy enough to push the R&D yourself.

Not the answer you're looking for? Browse other questions tagged wild-camping stoves or ask your own question.

35
Why don't climbers use electrically heated suits?
11
Can you boil water on top of Everest?

57
Why is it prohibited to sleep in a tent?
11
Can you boil water on top of Everest?
18
What type of fires/stove can I use in Germany?