How to use a Munter hitch to belay and rappel?

There seems to be conflicting information on the web about how to use a Munter hitch for belaying and rappelling while rock climbing. The way I learned decades ago is consistent with Nols Wilderness Mountaineering by Phil Powers:

The Munter hitch differs from a belay device in that the braking position is forward, toward the anchor, rather than back toward the hip. If you rappel using this hitch, be careful to use the Munter with the load strand close to the spine of the carabiner.

A number of videos and blogs suggest that the Munter should be tied with the load strand close to the gate and the break position down towards the hip. They even use an autoblock to back it up and force the downwards break position. (I am not providing links on the off chance I am correct and the information is bad). Have there been new developments regarding the use of a Munter hitch for belaying and rappelling?

To answer your question as to the ideal break position when using the munter: It depends. It depends on your comfort and experience with the knot, its application and the situation.

I have rappeled and belayed with munter-hitches on numeral occasions.

The following illustration is from the climbing and mountaineering bible Freedom of the Hills, which by the way every aspiring climber should have in his or her bookshelf. 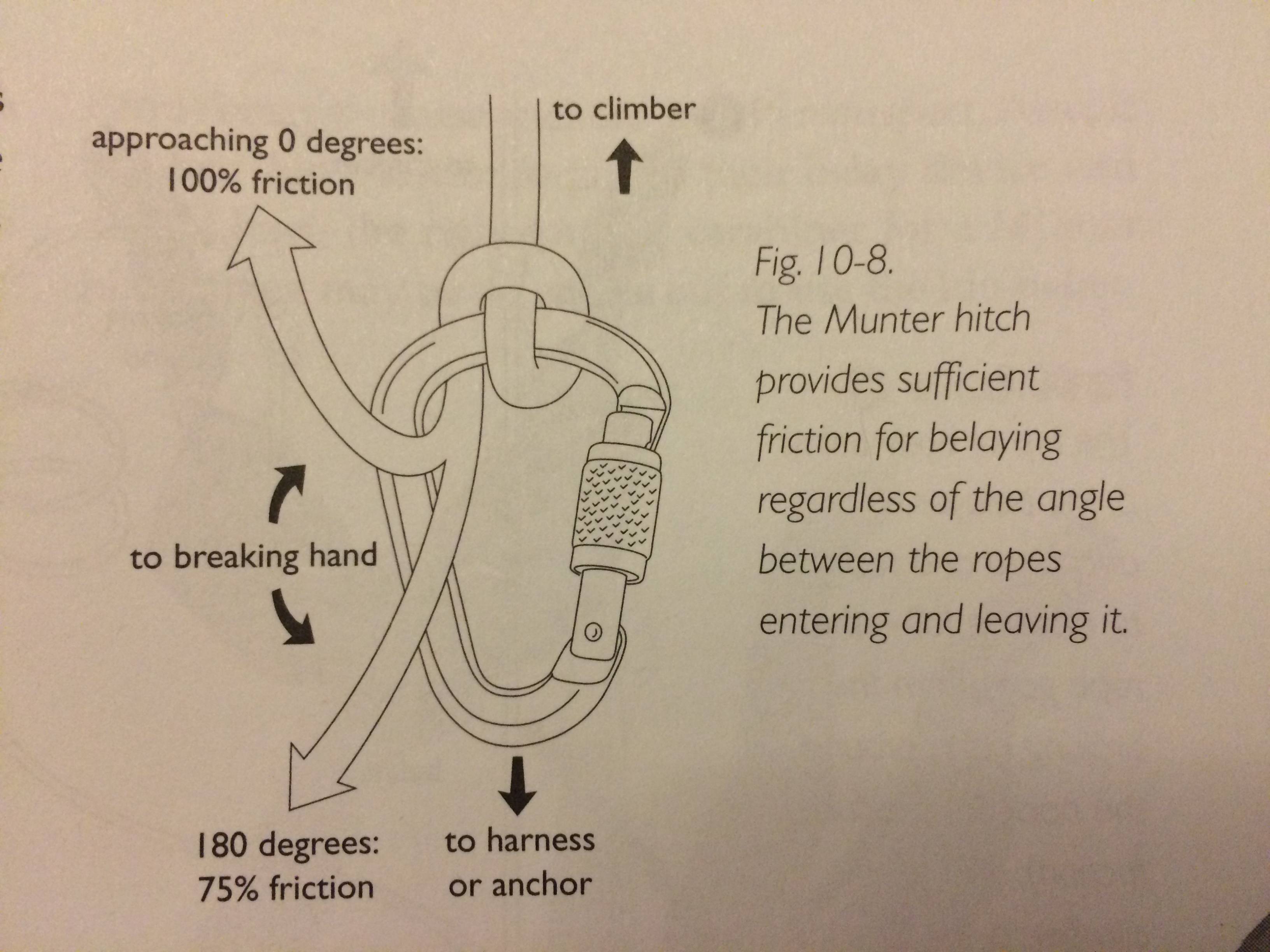 Learning the munter is absolutely not optional. It has saved my behind a couple of times when I have cast off without a belay device.

I wouldn't recommend using the munter though unless for practice or in situations when absolutely necessary, since it turns the rope into a twisted mess.

A Munter hitch can brake regardless of the orientation of the brake strand. It provides the greatest braking force in the "closed" position (the brake strand running alongside the load strand), and a lesser force in the open position. The first site I found with testing found the following brake force values (tested with 11mm rope):

Reviewing to Table 3 from a DAV Panorama article testing belay device loads, this is comparable to other belay devices and inline with numbers reported elsewhere around the internet (~2.5kN in the closed position). Unfortunately I was unable to locate previous test reports.

The positioning of the load strand relative to the spine tends to vary across the literature, in some cases both forms may be depicted in the same book. There are potential arguments for either position; the strongest in my opinion being that having the brake strand closest to the spine keeps it from inadvertently rolling over and unscrewing the gate of the carabiner. (Or the gate may have edges that could damage the running rope.) Testing done on the clove hitch (a structurally similar knot) show no strength benefit to placing the load strand closest to the spine.

If you are using the recommended pear-shaped (or HMS) carabiner for the munter, the positioning of the load strand will tend to end up in the "belly" of the carabiner regardless of the brake strand orientation. Refer to some of the pictures here in the "Carabiner shape" section: http://www.ropelab.com.au/munter-hitch/

Side note: The Outdoor Knots Book by Clyde Soles mentions that the twists a Munter is often accused of creating comes from a case of "pilot error" -- when the brake strand is held out to the side. Keeping the rope parallel is said to reduce or prevent this. Ironically enough, other sources have listed contradictory advice. (I have no data as to which is correct.)

5
How to rappel on an over-hanging cliff?
13
How to rappel with a dog?
12
Correct and incorrect slip-slap-slide belay technique
8
How to stop in the middle of a rappel without an autoblock?
3
Rappel: How do I start rappel from a ledge when using rappel extension
3
Use of a personal anchor system to rappel (abseil) off a cliff with anchors by the edge and at foot level
13
Is belaying with a hip belay unsafe?
0
Munter hitch + prusik for rope solo lead climbing
6
Rappelling using the Munter hitch - stopper knot at the end of the rope?