How to get kinks and twists out of a climbing rope?

One complaint about using the Munter hitch for belaying is that it twists and kinks the rope. After doing a full rope length rappel with a Munter hitch down a slightly overhanging face to the base of the climb, what is the best way for a pair of climber to get the twists and kinks out of the climbing rope (you can assume the rope is still hanging from the anchors and the climbers are standing on a wide open and secure area).

Good grief. The question was about getting the kinks out, not the merits of the Munter (which is invaluable, see David Fasulo's Self Rescue).

The best option, while on the rock, esp. if it is a nice day, is to hang your rope from one end, and slightly weight the other (to keep it from blowing around, tangling in trees, whatever). If you have a swivel (e.g. like you would use on a haul bag), you can use that to connect the rope to any anchor and tension the rope (this can be in a parking lot, just be sure that the car you tie it to is your own). Both of these will gently uncoil the rope.

Another option is to do an old-fashioned mountaineers coil and just make sure you are twisting the rope in the correct direction.

The one way I know to remove the twists from a climbing rope, requires for the rope not to be hanging nor in use in any way.

The procedure is quite simple but may require help from your partner:

And that's it. For really twisted ropes you might have to do it more than once.

The Halbmastwurfsicherung (half clove hitch) or "Munter Hitch" was one of those accidental discoveries. Someone back in the day tied a clove hitch wrong and discovered that the resulting knot had some potential application in belaying and descending.

Munters are however, the WORST discovery ever made for your ropes, and should only be used in emergency situations, or as a backup.

I only use munter hitches as a backup belay when I'm teaching kids how to rappel, and I never let the knot get tight unless I need to stop a fall. Never use a munter hitch for rappelling if you have some other descending device to use instead. The only time I let people rappel on munters is from a rappel tower, when I'm teaching them knots and letting them gain some experience, I've never used one outside a controlled environment, and never plan to.

The best way to get the twist out of your rope after rappelling on a munter, is to let the rope hang free. I never let my rope touch the ground when rappelling off my platform, that way the rope can twist in open air while you descend, and doesn't get all knotted up at the bottom, then when you get to the ground and untie from the rope, it mostly twists back. I try to alternate my descents on the rope by tying the munter both left and right handed, so it isn't twisting the rope the same way every time.

If you have two people descending on a rope, you could have one go down on a right-handed munter, and the second on a left-handed munter, this may leave you with less of a knot at the bottom. 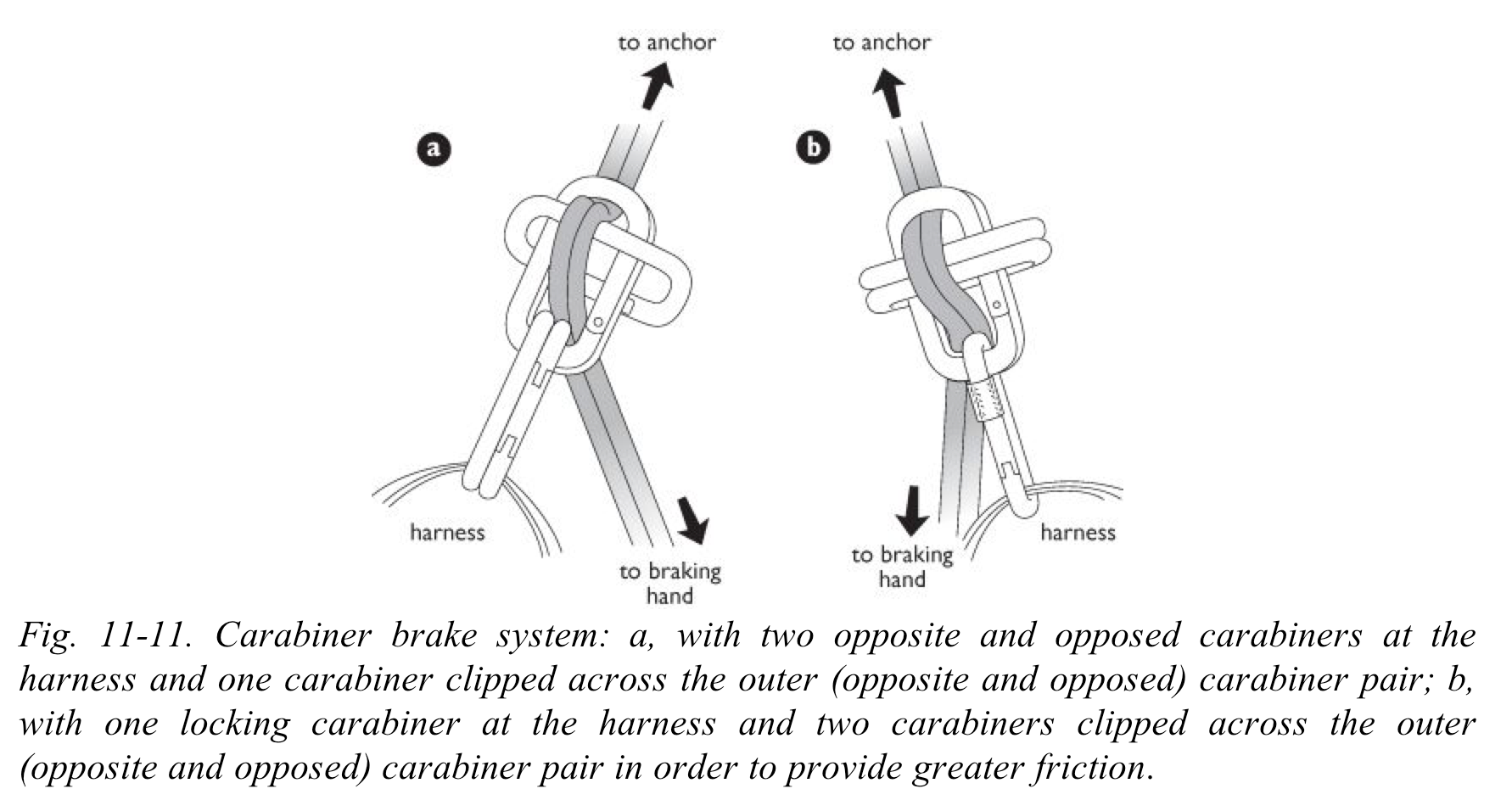 Image Source: Freedom of the Hills.

The main trick for getting the kinks out of a rope after using a Munter is not getting them in in the first place.

The blocking position for a Munter is with the belay rope pointing up. It still has enough friction when the belay rope points down (which is why some consider it "good enough" to use a Munter like any other belay device), but it moves uncontrollably about when switching rope direction and may position itself such that the rope unscrews the biner.

Old hands who position and use the Munter correctly are not particularly well-received in climbing gyms since stupid newcomers tend to mimic their rope-handling, and while a Munter handled like any other device becomes quirky and rope-kinking but at least retains enough friction (unless it unscrews itself in the process), most other belay devices handled in the manner of a Munter do not provide sufficient friction for catching a fall.

There are various special belay biners that try fixing and securing a biner where a wrong-sided Munter hitch will not move it about.

But this is where we are getting back to the kinked ropes: if you feed the rope in and out at the same side, the Munter bends the rope similarly in each direction. Consequently, it will not kink. Also more of the friction will be rope-around-biner friction rather than rope-to-rope friction, so the rope will also fray/fuzz less.

Now for rappelling, feeding from the top is actually rather awkward. So particularly the hardcore alpine Munter lovers will carry an eight for rappelling.

If you rappelled using a Munter, particularly as a bottomfeeder (make very very sure that it does not run over the screw), the rope will look exceptionally bad: this is not a regular technique but emergency only. Have someone with a good rappelling device and a good mood rappel right behind you (and he can forget about using an autobloc or similar friction knot). That will help the rope. Passing it from one side to the other will also help, but that's not really doable when you still need to pull it. At least try disentangling the end going up.

These days, new ropes have a core-mantle-displacement of 0 anyway. Old ropes may not have been fixed similarly: those kink the worst. If your rope is older than 15 years, you should have changed it long ago anyway. Even if much of that has been shelf life.

Avoid the problem with a better solution

Avoiding the twisting in the first place surely is best, and there is a simple way to do that: 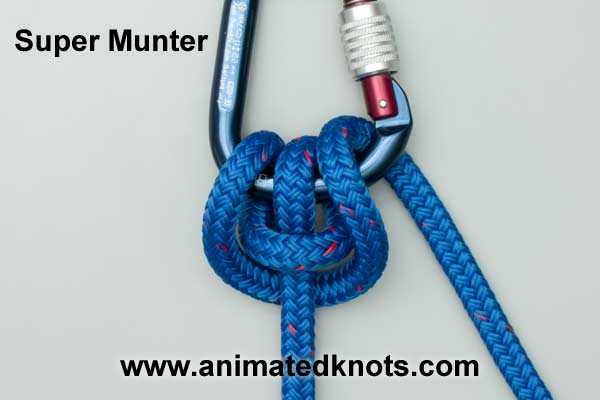 This is the Super Munter, Monster Munter, or Double Munter. It is essentially a second Munter tied over the first in the opposite direction, and this symmetry means that it does not twist the rope. It provides tremendous braking power but it also works with lighter weight as well. References:

Attempting to answer the question as asked

Due to the separate parts of a standard kernmantle rope twists can happen differentially between the core and sheath (kern and mantle) which can make completely straitening a badly kinked rope quite difficult compared to single-braid ropes. From my experience with shorter pieces of kernmantle cord I think tensioning the entire length of rope at once and untwisting that is a helpful complement to the pull-through method Roflo described. Since you described an overhanging rappel I would therefore bundle up all the rope that is on the ground and tie it to the hanging rope so that it is off the ground, and add any practical weight that is small enough to turn freely. The greatest twisting should be in the part that is not in the bundle as that part did not pass through the Munter. When you pull the rope what twisting remains will hopefully come out well enough.

I have never done a full-length rappel on a (single) Munter so this is speculation.

Not the answer you're looking for? Browse other questions tagged rock-climbing ropes or ask your own question.

5
Dealing with twists in a rope while belaying
4
How to abseil without a descender device?

25
Ideal and Minimal Rope Diameter for Lead Climbing
15
Toproping with two ropes joined by a double fisherman's
24
How should a climbing rope be stored?
20
How should a climbing rope be cleaned?
6
What do you do when you're rappelling a halfed rope and you run out of rope on one side?
5
How to use a static rope as a tether at the anchor of a top rope climb?
5
Dealing with twists in a rope while belaying
7
Transition from ascending to descending a rope
0
Munter hitch + prusik for rope solo lead climbing
5
Multi-pitch sport climb: Rope too short for rappelling, but having a backup rope