Which knot for climbing: figure eight, yosemite bowline, bowline on a bight?

This is a topic often discussed online, but all I could find so far was people sharing their opinions (including numbers) on what tie-in knot is the best. Here's what I've found out from different sources:

While I'm not at all against personal opinions as answers, these are usually not very good advice just on their own when it comes to matters critical to security; it's your life hanging on that knot after all. I would especially appreciate data on the knot strength; all the values I've got so far come from this German Wikipedia article, where somebody who doesn't know how to quote wrote down some numbers.

Long story short: Which one to use? Figure eight is starting to annoy me when my hands are tired and I've fallen. :-)

Most climbers use a re-threaded figure 8. The knot is not that important, though. In reading many accident reports, I have never seen one where the knot came untied or where there was a rope failure due to the knot on the harness. Pick a knot you're very familiar with, check it, and you're done. Spend more time checking belay devices, locking caribiners, communication with your partner, and especially your protection.

One way to untie a tight double figure 8 is to bend the entire knot back and forth, then push both parts (parallel strands) of one end into the knot. This should loosen it enough to come undone easily.

The three knots you listed are all quite suitable for tying in to a sit harness for rock climbing.

The figure eight is the most widely used and most readily and easily inspected, and is not a bad choice for tying in:

...When tying into the rope there’s a reason the figure eight knot has been the knot of choice for years. Strong, simple, easy to untie and nearly as strong as the rope, there is no better knot for connecting the climber to the system...

Tie the knot that you and your partner or group are absolutely confident in and can inspect without having to even think about it that hard.

You might think it's silly, but if you can't tie the knot with your eyes closed, you probably shouldn't use it until you can. Whatever the knot, it should become second-nature, and then you and your partner still need to check it.

I have been climbing on a yosemite bowline for a long time, and never had any problems. I don't see it as any harder to check than a figure 8 once you are used to it. It's easy to tie, secure, faster than the figure 8, requires less rope, and never gets difficult to untie after falls. It's a great knot, and there seems to be a lot of superstitious aversion to it out there. I have been accosted by teenage gym workers on a couple of occasions who have almost no climbing experience about how "dangerous" the bowline is to climb on. At best it's nonsense, at worst it's insulting. Nothing wrong with the figure 8, but the yosemite bowline is a fine knot for climbing.

I would say, dismiss the bowline on a bight since it needs a backup stopper knot to prevent loosening over time so it's not a "complete" knot like the other candidates.

The bends on the yosemite bowline are generally less tight than the figure eight. This bowline is less likely to jam, wears the the rope involved in the knot less, so from a rope longevity, fall damage to the rope, and general stress sense, the yosemite bowline would have to be the superior knot from an "engineering" standpoint.

I would not choose a knot on that basis and instead choose the one my party is most comfortable tying over and over and checking over and over. I don't see how the technical superiority of the yosemite bowline would make it measurably better "in the field" than the figure eight. If I didn't have a fid to assist in knot untying or my finger strength / rope choice made "untieability" after falls an issue, that would be a fair reason to choose a bowline over a more simple and jam-prone knot.

The F8 is an inherently secure eye knot. Not all knots are inherently secure - but the F8 is, and hence one of the reasons for its enduring popularity for use in life critical applications. The simple Bowline (#1010) has been known and used for hundreds of years by sailors - and it was 'invented' for this purpose (ie in sailing applications). The simple (#1010) Bowline is not inherently secure - but thats no alarming revelation - it was never intended for life critical applications!! So climbers realized that #1010 was jam resistant - in fact it has no known jamming threshold - and so they adopted it for climbing applications. Back in the day - they used to use vegetable fibre ropes which were quite 'frictive'. Modern synthetic ropes are quite slick by comparison. The Yosemite Bowline was an attempt to address the insecurity of the simple (#1010) Bowline. However, its 'security' is very dependent on the type of climbing rope used. The Yosemite Bowline does not perform so well in stiffer ropes (ie not so secure).

With regard to the #1080 Bowline-on-a-bight - this also suffers from certain vulnerabilities. These issues can be addressed by adding a 'backup stopper knot' - which is technically a strangle. However, and here is the key message to all... you are far better off using a tie-in knot that is inherently secure. As stated, the F8 (#1047) is inherently secure. A knot which has the property of 'inherently secure' is one that does not require a backup stopper knot (ie strangle) to lock it down. As dynamic climbing ropes get thinner and thinner, the propensity for jamming becomes an issue. Enter stage right - 'Bowlines'. Note: The F8 eye knot is vulnerable to jamming (at loads from 4kN). Bowlines are also Post Eye Tiable (PET) - the F8 isn't 'PET'. If you are going to tie-in with a 'Bowline' - you should select and use a 'Bowline' that is inherently secure (one that doesn't require any backup stopper knot).

Each of the above 4 'Bowlines' are inherently secure and stable - and suitable for life critical applications. Obviously, you need to learn how to tie them correctly. Just like you learnt to tie the F8 (#1047) correctly! Training and practice is key to mastering all skills.

I will also comment on the notional concept of a knots MBS yield (ie strength - the load at which point the knot begins to yield). It is a myth - an urban legend. The MBS yield of a knot is entirely irrelevant in climbing. There is no load that a falling climber can generate that will reach the MBS yield point of a knot. So why is strength always appearing in knot discussions? Because information is spread by word-of-mouth and few actually stop to question it. When people talk of 'strength' - what they really mean (but don't understand fully) is security and stability. What matters most with knots used in life critical applications is security and stability (not MBS yield).

NOTE: The image of the tying sequence shown above is not a #1013 Double Bowline. It is in fact a #1080 Bowline on-a-bight. Its yet another example of misinformation / poor journalism. Furthermore, both the #1013 and #1080 Bowlines are not inherently secure.

From my personal experience, people either use a double bowline (*) or a double figure 8. The bowline (in my experience!) is used only by fairly experienced climbers, probably because it is more difficult to execute.

I will list some pros/cons of the two knots; remind anyway that both knots are absolutely safe to use (as I'm sure is the Yosemite bowline, which I don't know). 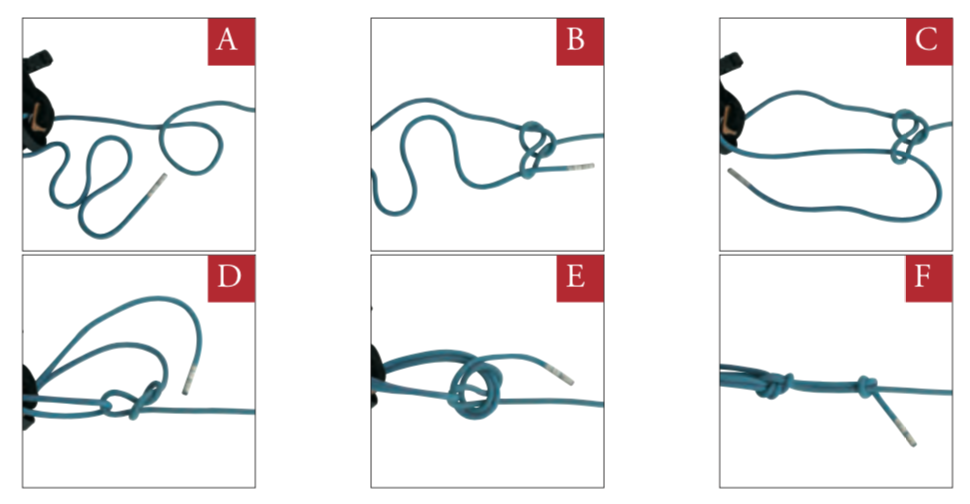 (*) I think it is equivalent to what you refer to as "bowline on a bight".

As far as being able to tie a knot blindfolded, etc... A better measure is to understand how knots work, and what constitutes a properly tied knot. If I was half way up a big wall and you insisted that I tie in using no known knot, and a substitute that was minimal and elegant, I would have no difficulty coming up with one. You can do it by rote, or you can actually understand what is going on.

It is not true that any of these knots is nearly as strong as the rope they are tied in. They run 65-80% last I heard, which was a long time ago. However, dynamic ropes never develop impact loads that threaten overall tensile strength (if the parts are healthy) so it works out. I figure the stronger an otherwise functional knot, the longer the rope end will last since the loads fall in much the same place every time. Can't hurt anything to use strong knots.

I think there may be sufficient experience in the guide and gym community to throw legitimate shade on the bowline, when dealing with essentially non-climbers. But there is also sufficient evidence to suggest that having two belayers on the same rope is a rational process (in series, not at either end as in normal roped climbing). So what needs the insurance company, and what needs the real world are two different things. Your laces are pretty important when climbing, and one has to wonder what insurance company tie is acceptable there. Belt or suspenders, boxers or briefs. All stuff we need the insurance company to weigh in on, and in certain circles, they would have legitimate info.

The thing about the figure of 8 being easier to check and all that is fine if you are not in any way interested in anything other than the simplest climbing set-ups, which are adequate for a great deal of climbing. But in anything more complicated, you better be able to do more than follow nursery rhyme sequences.

Though it isn't the metric I use. Honold uses the 8 with follow through in the videos I have seen. I am a double bowline guy.

Not the answer you're looking for? Browse other questions tagged climbing knots bowline-knots or ask your own question.

65
What are good knots to know for camping and backpacking?
4
How to make it easier to untie a figure-8 knot after finishing a climb?

7
How do I tie a bowline knot?
28
Bowline knot, end at the inside or outside?
24
How safe is the bowline knot in different situations?
15
Which mid-line knot is best suited for a trucker's hitch?
11
Top Rope Anchors - is a figure-8 on a bight stronger or just easier to untie than an overhand knot?
6
Does inside vs outside make a difference in a bowline on a bight?
1
How to tie a figure eight on a bight?
3
How to tie a super eight / double figure eight / bunny ear knot?
8
What is the strongest knot using a steel-thimble to make a steel-eyelet at the end of the line?