How do you safely cut wood with a knife?

Several people have talked about having single edge knife so that you can cut down small trees. What is the proper way to cut or carve wood with a knife?

You really want a saw or camp axe for this purpose, but if using a knife you want one without serrations. Serrations are not a replacement for a saw. A saw cuts a kerf wider than the blade itself so it (with skill) doesn't jam. Serrations are usually placed near the handle which is exactly where you don't want them because this is where you have the most leverage for a push cut.

Getting onto technique itself, here are a couple of videos that show how to use a small knife (not a chopper) better than I could in words. If you have a proper fixed-bade you can use batoning which is a very powerful technique, but don't try it with a folder. (If you do have to use it with a folder, such as splitting wood in an emergency, unlock the handle a small angle so that each hit is not destroying the lock. This is dangerous and should not normally be attempted.)

The start of this second video shows transverse batoning, the method that one would use to cut thicker or hard limbs with a small but sturdy fixed-blade knife.

Thinner and softer shoots and saplings can often be cut by bending the limb to pretension it, then cutting at an angle into the convex side. Be careful because you are cutting into what is effectively a spring.

What you want to do is find a good knife, that is partially serrated, so that you can have the choice of cutting things with the serrations or without...

I personally recommend the CRKT M16-10KZ (EDC) or another knife of the M16 line, as they cut small trees/shrubs quite easily. I've used the M16-10KZ (3" blade) to cut stuff like this before and it does it easily. 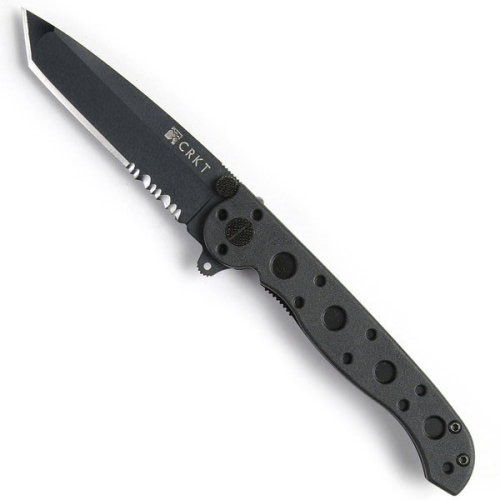 note: I am not affiliated with CRKT in any way, shape, or form.

If you want to do axe or machete work with a knife bring a big fixed blader, like the ones made by Ka-bar, Glock or (as a sort of lower limit on the size and weight) Mora, to name a few. Folding knives are typically not up to the abuse, and if you have one that is up to it you can get so many more years of enjoyment out of that great knife you have if you don't use them for this. An alternative I've personally fallen in love with is a small plate steel hatchet that I can use as a knife (mine is a model sold under different brand names that don't have as much as their own website including "Mcgyver", and the sheath is crappy by the way). If chopping is going to be most of what you do that's an option. You don't want serrations on a chopping blade. (A sawback is debatable, but definitely no serrations on the front.) Serrations are for cutting rope. They're a fine feature on for instance a folding blade you want to among other things cut rope with, not on a chopper.

Knives are lighter and handle easier than full sized axes, so using them safely is mostly a manner of common sense. Don't position your second hand or your thumb in such a way that you could conceivably cut into it. If you find yourself in such a position, reposition. (Or if you're cutting just do it very carefully, but chopping is not really a thing that can be done very carefully.)

For splitting wood batoning is a very useful technique. You basically hammer the blade through a piece of wood. (Along the grain, you cannot use this to for instance cut down a tree, because there's no way to do it along the grain! So it's for splitting only.) You use a second piece of wood as a hammer, it's pretty cool. But again: sturdy fixed blade knife, you don't want pieces of blade flying around.

Not the answer you're looking for? Browse other questions tagged safety knives or ask your own question.

20
What to look for when purchasing a fixed blade knife

9
Is a Tanto or Utility knife best to carry when mountaineering?
21
Canadian Law with respect to knives
11
What are some simple tasks to teach knife safety?
5
Tactical Folder vs traditional knife patterns for EDC
10
Hunting bears with a knife?
11
Restore knife to factory sharp condition
7
How do I clean my knife sharpener?
7
How can I make an obsidian knife?
6
What is the use of the saw blade on a swiss knife?
3
Are there any large knife/saw multitools for pocket or belt use?