Is this sand dollar with barnacles attached to it at all rare?

While taking my usual stroll along Del Monte beach in Monterey yesterday, I found this sand dollar with a clump of barnacles attached: 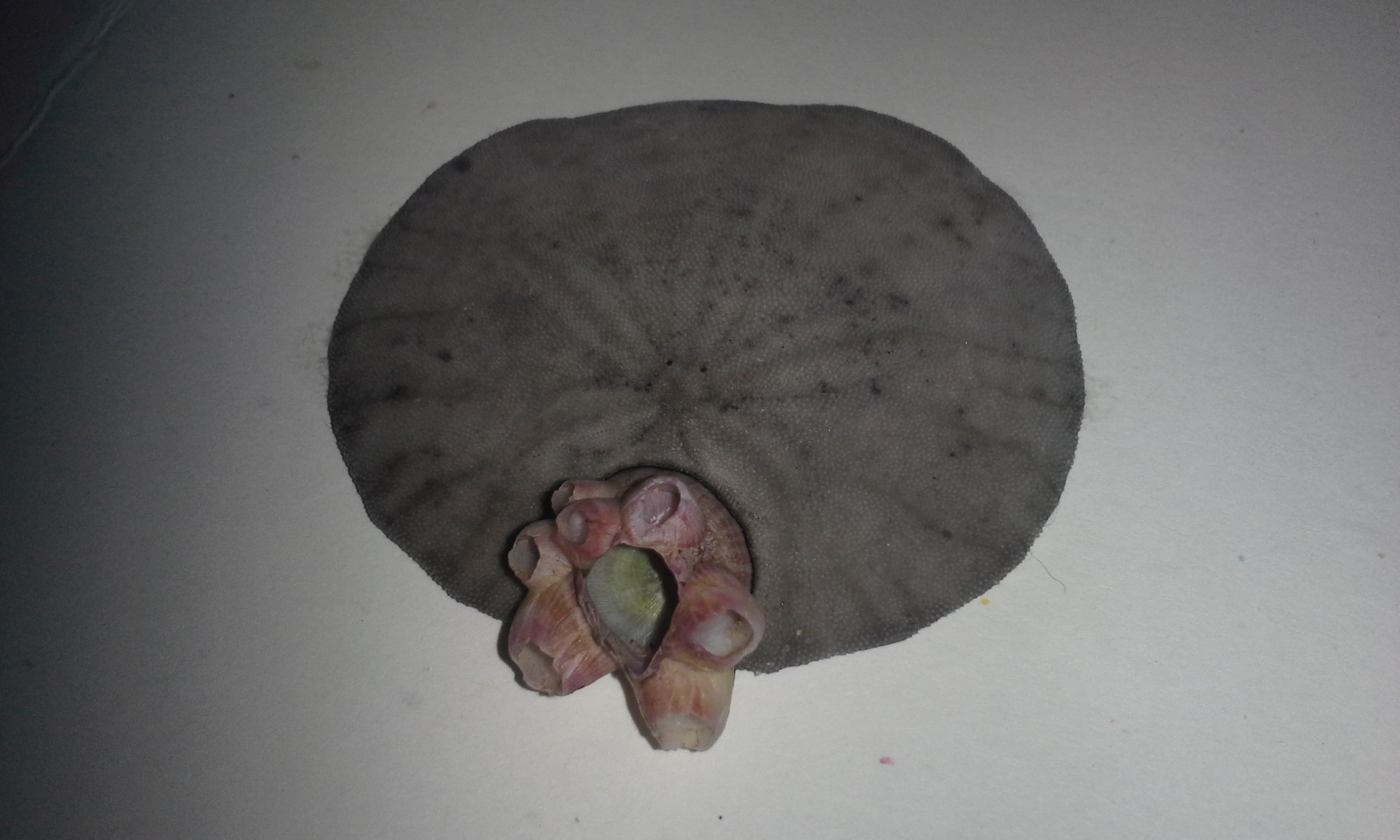 Is this rare at all? Any observations on why it would wash up onto the beach?

Sand dollars with barnacles attached like that are very common in the Monterey area. In fact, beaches like Del Monte are considered excellent locations for scientists to study them. The well-respected Monterey Bay Aquarium has extensive ongoing research on both sand dollars and barnacles.

Of the 900 species of acorn barnacles, including those in your picture, some have been seen on sand dollars on the California coast for many decades. There are reports dating as far back as the early part of the century.

The Exotics Guide has an interesting list of species and when they were recorded in different geographic locations, including Monterey Bay. Two of the more common species are popular in the area, both of which choose sand dollars for their home. I'm glad you didn't ask for an exact identification, because it can be hard to narrow down. However, I wouldn't be surprised if yours is a Paraconcavus pacificus, also called the red-striped acorn barnacle.

Paraconcavus pacificus is a primarily subtidal barnacle that ranges from Monterey Bay to Baja California. It usually lives attached to other organisms, such as sand dollars, on sandy bottoms. It grows to a diameter of 35 mm, and has smooth white walls with reddish stripes. There are fine lines running from the base up toward the apex on the outer surface of the scutum, which distinguishes this species from Balanus amphitrite.

A naturalist site run by the California Academy of Science, describes the Paraconcavus pacificus, pretty much the same way. The following section underscores its propensity for sand dollars.

While it will attach to many different kinds of hard substrate, it shows a preference for attaching the shells of other organisms, particularly sand dollars.

I recommend spending time at that site. It has a wealth of information about the barnacle, such as how it functions, its life history, and other interesting features. It also has a page with a map of distribution, clearly showing that it's more common in your area than pretty much anywhere else in the world!

There's a graph on that page showing the history of sightings. I think it's updated constantly because it's current as of June, 2017. Since it began in August of 2014, the level stayed pretty steady until the summer of 2016, when there was a marked increase. You may have witnessed part of that, since you wrote this question in April of 2016.

That site also has a good photograph collection, which shows many that are similar to your picture. I didn't post any because I'm not sure they're public domain. This was taken in Monterey in 2014. It's from the blog page of a family on vacation.

You might also like this article from the San Luis Obispo Tribune, in March of 2013, entitled Barnacles and Sand Dollars. It's the story of a woman who observed an unusual increase in barnacles on sand dollars on her favorite California beaches in the area of Cayucos. It's a few hours away from Monterey, but I think it's relevant.

Minnesotan Judy Flatten spends her winters in Cayucos. On most days, she takes long walks along the beach between Cayucos and Morro Bay and is glad to have escaped Minnesota's winter freeze. This year she observed that countless sand dollars had acorn barnacles attached. In fact, these crustaceans, related to lobsters and crabs, were on every solid surface that was temporarily covered by seawater. She wondered if some sort of plague had struck her beloved beach.

This led the reporter to contact a local environmental scientist, Fred Steinert, who has spent decades studying barnacles on sand dollars and tracking these patterns. He usually finds the largest populations in August and September.

Fred told me that the last two years have been especially strong in barnacle recruitment, which may have led to Judy's observations of countless reddish white, cone-like structures along the shoreline.

Judging by when the article was written, he would have been referring to the years 2012 and 2013.

As for why they wash up on the beach, it's usually because they're deceased.

Sand dollars live in the subtidal zone, which is an area close to the water's edge. It's shallow, but not visible, even at low tide. Most of the time they're submerged in the sand on their side, though sometimes they're lying flat.

Here's a good description from the Monterey Bay Aquarium.

The familiar exoskeleton of a sand dollar—often found cast up on a beach—is white, with an obvious five-pointed shape on the back. But a live sand dollar has a different look. Densely packed, tiny, dark purple spines cover live sand dollars and hide the star design.

In their sandy seafloor habitat, sand dollars use their fuzzy spines, aided by tiny hairs (cilia), to ferry food particles along their bodies to a central mouth on their bottom side. They capture plankton with spines and pincers (pedicellariae) on their body surfaces. A tiny teepee-shaped cone of spines bunched up on a sand dollar's body marks a spot where captive amphipods or crab larvae are being held for transport to the mouth. Unlike sea stars that use tube feet for locomotion, sand dollars use their spines to move along the sand, or to drive edgewise into the sand. On the upper half of the sand dollar's body, spines also serve as gills.

In quiet waters, these flattened animals stand on end, partially buried in the sand. When waters are rough, sand dollars hold their ground by lying flat—or burrowing under. In fast-moving waters, adults also fight the currents by growing heavier skeletons. Young sand dollars swallow heavy sand grains to weigh themselves down.

Multiple sources agree that when sand dollars die, they can't hold on to the ocean floor. They wash up on the beach, where over time the sun bleaches the color out.

The prevalence of dead sand-dollars on the California Coast beaches seems to be in proportion to their numbers, and the usual cycle of life, not necessarily to an event that precipitates early death.

Interestingly, the sand dollar in your picture has a dark tint to it. I don't know if that's just the nature of the picture, or if it's recently deceased.

The only time we're ever supposed to touch a sand dollar is if we genuinely suspect that it's alive. It would have to be very dark. Obviously if it appears to be walking, you should suspect life! If you find a stationary dark one, look closely on its back for a furry texture. If you see that, you can lift it gently, and, while holding it upright, look at the bottom. If you see a lot of spines, or any moving spines, walk a few feet out into the water and gently set it down in the sand, not just in the water.

Barnacles can live for a period of time on a dead host, but once it's out of the water for a while, it too runs out of food. It will pass away and leave the shell empty. That's why barnacles on old, dried up logs and other hosts high on the beach are empty. If you have any suspicion that there's a live barnacle, absolutely do not touch it. It's not always easy to tell without experience, so we should never disturb a barnacle unless it's obviously empty. Interestingly, sometimes tiny hermit crabs will take up residence in an empty barnacle shell. That's another reason why we must look closely before touching them.

I'll leave you with this fun fact from the Monterey Bay Aquarium about how a barnacle becomes a barnacle:

Acorn barnacles, related to shrimp, hide their identity in snail-like shells. But they begin life as free swimming larvae. When the time comes to settle, the larvae "glue" their heads to hard surfaces, such as pilings, wharfs, ships, rocks or other hard-shelled animals.

Once attached, they change into juvenile barnacles, minatures of the adults. Then each builds its own fortress—a cone-shaped limestone shell with a trap door in the ceiling. When water covers a barnacle, the trap door opens, and the barnacle's feathery legs emerge to sweep the water for plankton and detritus. When the tide is out, barnacles close their trap doors to conserve moisture. Barnacles spend the rest of their lives in this position—head down and feet up!

For practical purposes, rarity is beyond difficult to answer. Sure there may be a biological survey buried somewhere in some journal, but specific topics like that don't get much traction outside of small specialized communities of biologists.

For a heuristic, I have used a combination of google images and pricing. For google images there are certainly many, many of these images. Many of these are by amateurs. This indicates that it is common enough for the average joe to stumble upon them with semi-regularity.

Secondly we can look at prices. These appear to sell on crafting sites for under $3 each. Sand dollars without barnacles sell for under $2 each. This could either mean that they are not terribly rare, or that there is little demand for sand dollars with barnacles.

Based on this, I would say that no, these are not rare.

Lastly, there is the definition of the world "rare" itself. Failing any qualifiers, it's rather subjective -- further complicating the task of created an authoritative answer.

Where I live sand dollars as such are rare to find until after a storm or typhoon has passed. Then you can find them on the beach. The barnacles are a good food for squid & such, when they're alive.

Not the answer you're looking for? Browse other questions tagged sea beach or ask your own question.

11
What sort of white rock with lots of small holes is this?
29
What are some effective ways to deal with sand when camping on or near the beach?
7
Why do Sandpipers and Plovers "hang out" together?
8
What would cause sudsy surf?
8
How do Plover sentinels give the "move out" signal?
6
What makes some beaches better spots for beachcombers than others?
7
Are Dolphin sightings seasonal or serendipitous?
8
Where have all the sandpipers gone?
5
Can deep wave action be partially predicted by lunar phases?