What causes these shallow indentations in cheek of axe head?

On a new Hults Bruk's Kisa axe, the cheek isn't entirely smooth and has shallow indentations in it. The blade is nice and sharp, whole thing feels sturdy.

Here are some pictures: 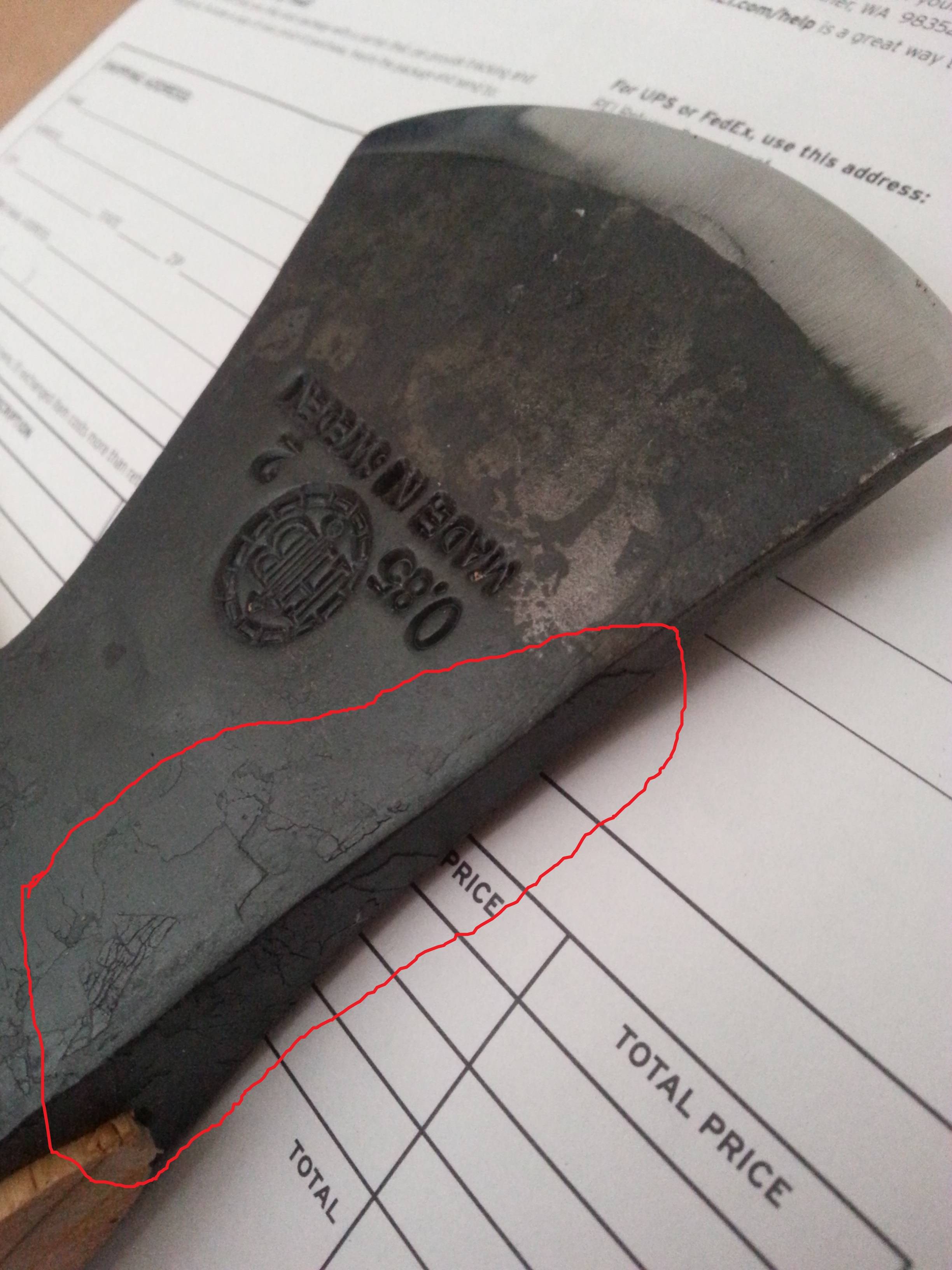 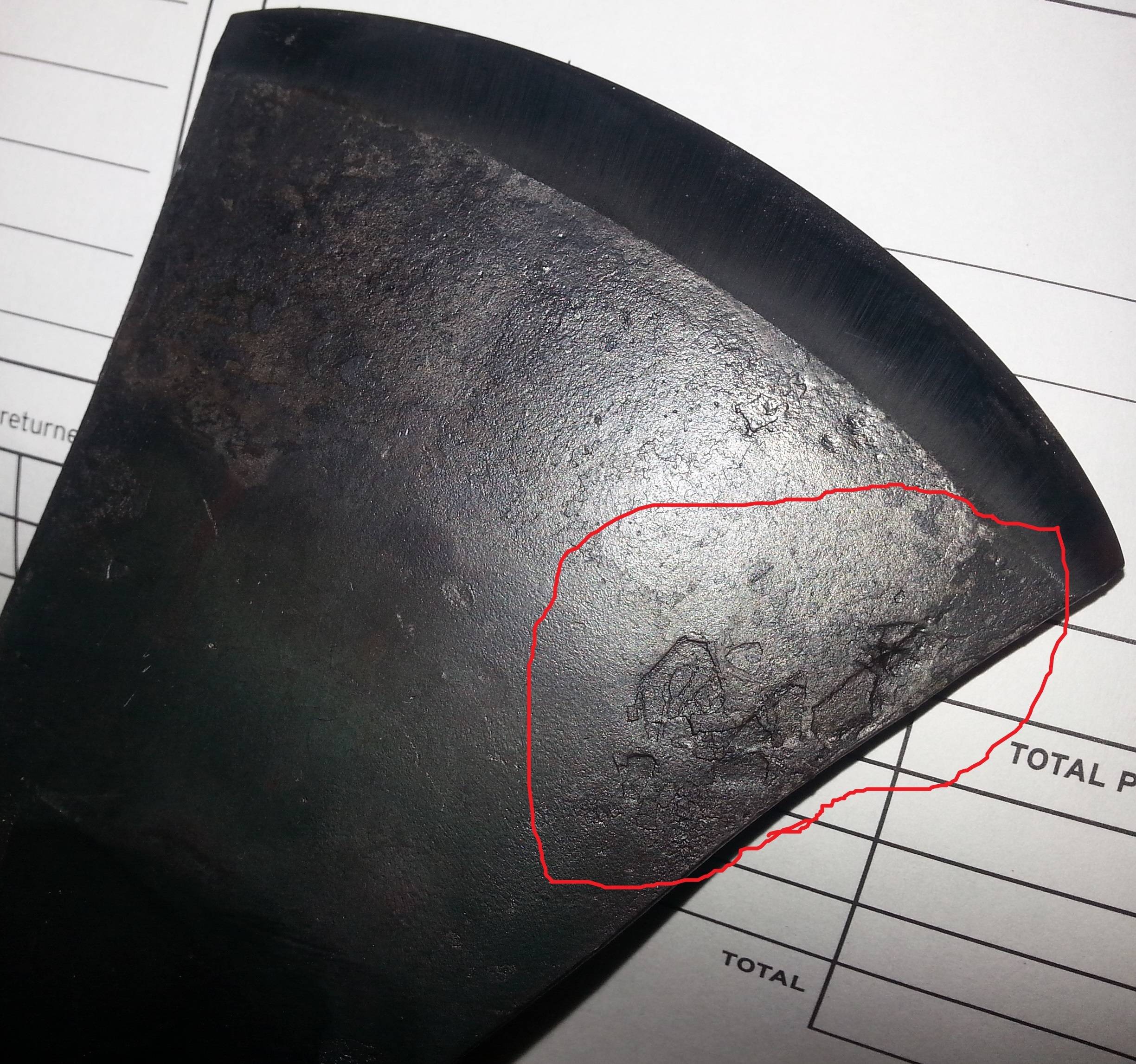 That just looks like forge scale. Those axes are hand forged and during the process oxides build up on the surface of the metal and if flakes of scale get picked up on the head of the hammer (probably a power hammer in this case) they can get driven into the surface of the steel making a shallow indent.

You can also get texture where the scale falls off in some places but not others.

Axes are pretty overbuilt in terms of material thickness so shallow indents like this on the surface won't make any difference to its performance, strength or durability, especially considering that the stamping is a lot deeper than those pits.

A lot of the steel in an axe head is there to make up weight and provide the correct geometry, in fact in many traditional styles use a 3 layer laminated construction with the bulk of the head made up by wrought iron or mild steel to economise on tools steel which was, historically, very expensive.

Looks like scaling to me, the way scaling is dealt with when forging depends a bit on the composition of the metal and the heat that is used (lots of heat=lots of scaling, you can eat away a lot of the material just in scaling if you work too hot). Normally after you acquire practice working scaling wont be a problem. These days "hand made" forging doesn't necessarily mean a guy hammering away on the piece over an anvil. Its usually open die forging: the guy moves the piece from one hydraulic hammer to the other, as each has a different shaped head and the metal can spread at the sides, until the final shape is obtained. That's opposed to the close die forging where there is a die with the final product shape and the metal is formed into it by one single hammer and this one can be all automated. They both are forms of drop forging but the first one often falls into the "hand forged" just because there's a worker moving the piece to shape it.

While scaling can be just a surface thing, so it wont matter much and can still be removed by you (and btw, some can be left on purpose as hand made sort of aesthetic reason), what would worry me is what is visible in your first picture, right at the back of the ground edge, forming a sort of C, it seems like the edge of a rather big chip (unless its just the picture that fools the eye). Can be that is somehow fused or a proper crack, its hard to say on the ground side because grinding moves the metal over a bit but it shows the depth of it. 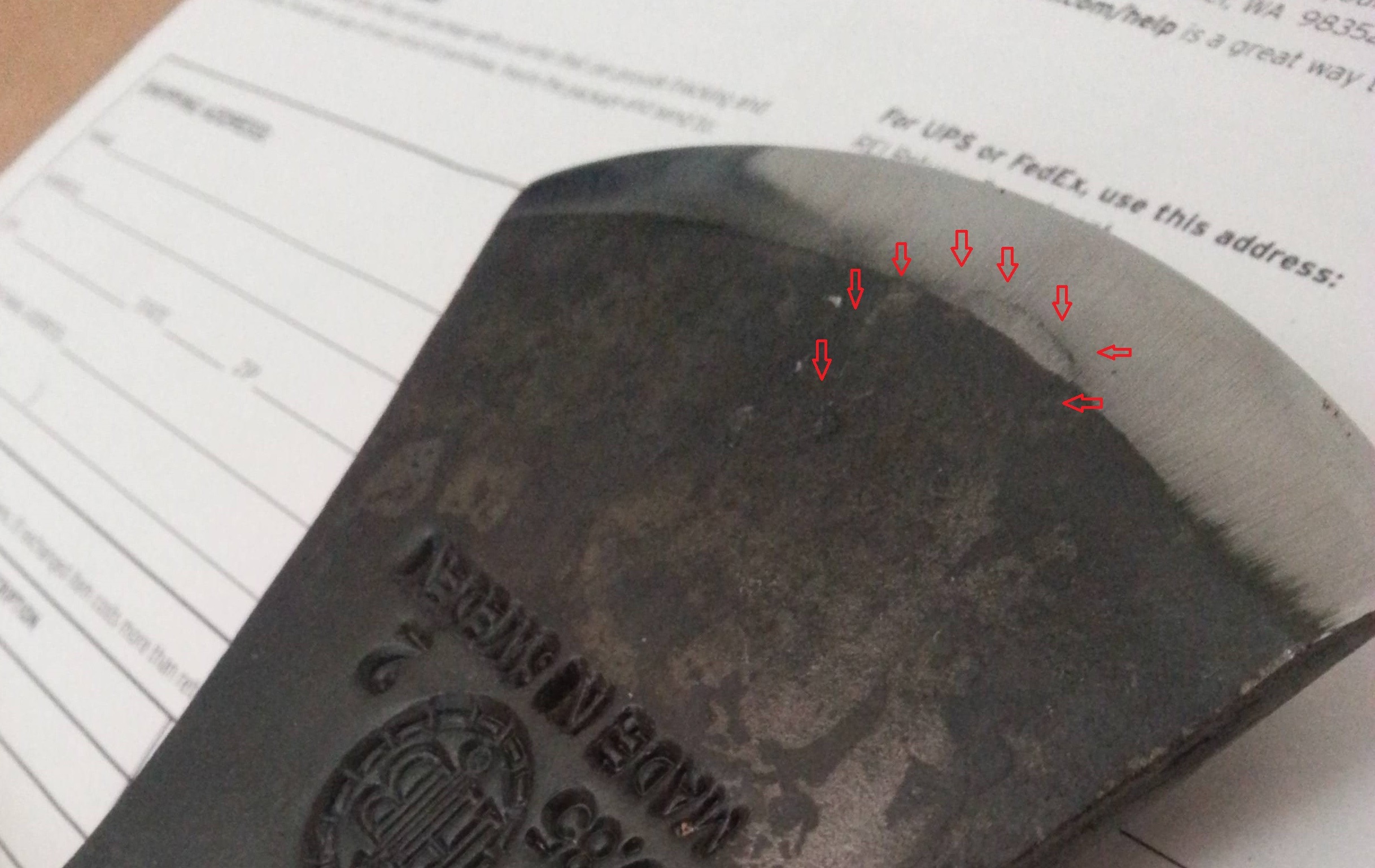 Also the darker corner (up and left) on the edge would make me think that they started grinding there and it got too hot while doing the rest. Others might have different opinions on that.

Not the answer you're looking for? Browse other questions tagged gear safety or ask your own question.

23
How do I know what size ice axe I should get?
11
What causes an avalanche and can I predict one?
19
What makes a good head lamp?
12
What are the tradeoffs for a Tomahawk over an Axe
17
What are the pros and cons of ice axe leashes?
3
What are these numbers on the back of a pocket transit for?
7
What is the proper way to ford a shallow body of water in a back country situation?
14
What are these red, air-filled, pod-shaped pieces of vintage outdoor gear?