How dependable is a cheap compass?

I clicked on the link and saw this photo, four compasses sitting side by side. Two of them agree, the other two disagree significantly about the direction.

How accurate/dependable should you expect an inexpensive compass to be? 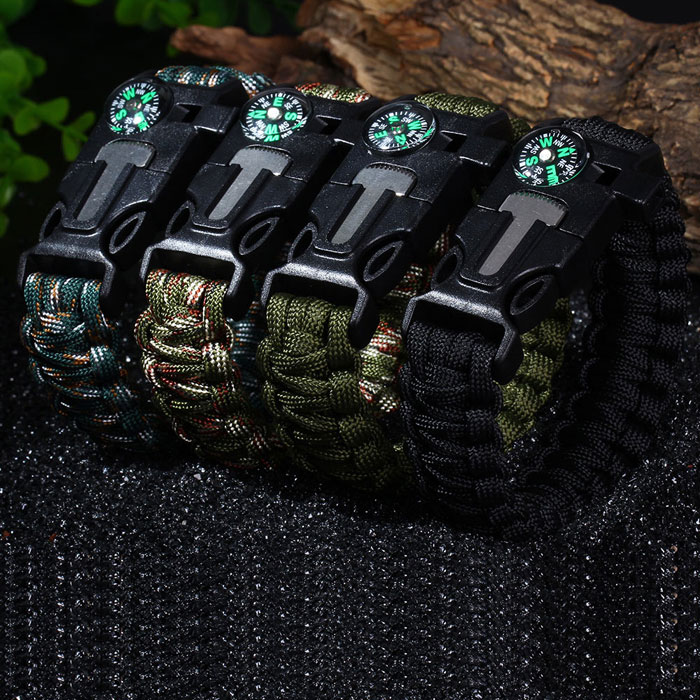 There's cheap and there's too cheap! Remember - this is a tool you may be trusting with your life...

For any kind of serious navigation you need a baseplate compass rather than the button type in your image. This is so you can take reliable bearings from your map to the land and back-bearings from the land to your map.

Even the entry-level baseplate models of a decent brand like Silva or Suunto will be fine for most recreational purposes, and start at around $20. An own-brand baseplate compass from a trustworthy outdoor chain should be a little cheaper still. Compasses last for decades with proper care, so are a good investment.

You can spend 3-4 times more on the top models, and for this you get faster needle orientation, better damping, better handling of magnetic variation, and a compass that will work in both the northern and southern hemispheres (the base models will be balanced for the hemisphere where it is purchased). All these features are convenient, but in practice a top-end model won't be significantly more accurate than an inexpensive model used with care.

So the answer is, you can expect a cheap baseplate compass from any reputable brand to be 100% reliable provided you understand its limitations and use it with care. Please don't trust your life to other types of compass that aren't designed for serious wild-country navigation.

Inexpensive compasses in general are fine. Even from a good brand the base models are not much more than the price of a few beers. Indeed in most cases these are all you ever need.

However cheap button compasses are a bit suspect. To be fair it looks like that picture is 4 separate images photoshopped over a background so the fact that the indicated direction differs may not actually prove anything but my experience is that it is pretty rare that they are particularly accurate.

There is of course an argument that as long as they point in a consistent direction that's better than nothing but in this case there is a chance that they will just point in the direction of the 'scraper' if it gets magnetised.

There are decent button compasses but they tend to be a fair bit more expensive than an equivalent baseplate compass. And even a good one will only ever give you a general indication of direction rather than an accurate bearing.

Consider the question in the terms of basic physics. Essentially, the magnetic pull of the earth and needle's magnet creates a torque on the compass (wheel / disk / needle etc. ) causing it to rotate. In an ideal compass, the torque meets only dampening resistance - you don't want the needle to move too quickly or you will get an oscillation while hunting for steady state. Thus, the needle will move until it has zero torque placed on it (pointing north)

In a non-ideal compass (a real one), there is some amount of force that counters the rotation of the compass (generally friction). The greater that force, the more potential error that a compass may have. This is true because the force of the earths magnetic pull produced the greatest torque when the needle is at 90 degrees to it. As the needle gets close to pointing north, the exerted torque from the earth reduces. Eventually, the torque exerted by the earth is not enough to overcome the frictional force (s) and the needle no longer moves (even though it is not pointing north). Thus, your reading will be in error.

Cheaper compasses will have a greater frictional component. Often, this component is a function of the angle at which it is held - making the inaccuracies harder to predict.

A good compass will be manufactured with emphasis on reducing frictional forces and will often have a level to help you keep the compass flat while performing readings.

I can't speak to what the price point difference is between good and bad. I can say, though, that a compass has a very specific purpose - to help keep you from getting lost. Do you really want your survival to depend on the lowest bidder?

How accurate/dependable should you expect an inexpensive compass to be?

I would expect it to be as accurate & dependable as any Boy Scout compass would be. They are pretty cheap, even at the Scout Store & they are reliable for 6th - 12th graders to use. If a cheap compass isn't as dependable as one of the compasses which are safe for kids, then don't buy it.

Not the answer you're looking for? Browse other questions tagged survival compasses or ask your own question.