Is there a rule of thumb, how many fps is added per missing grain of the arrow?

I'm searching for something like the draw weight rule, which says: "Add 5% of the poundage given at 28" per inch draw length."

I do not know any rule of thumbs but I do have some knowledge in physics and math, so lets see what we can do with that=)

Let's assume the energy that is put into an arrow is independent of the weight of the arrow. If we would want to model this too, it would be highly dependent of construction of the bow, and not useful for any rule of thumb. And as long as the weight of the two arrows we want to consider is sufficiently similar, this assumption will still provide good enough results.

When we solve this for v2 we get:

where sqrt denotes the square root. If this formula is not simple enough we can approximate further:

If x is close to 1 then sqrt(x) is close to 1+x/2 (second order taylor approximation*), so we can simplify the formula to:

Even this approximation of the coefficient is quite nonlinear so it is not possible to make a statement x grains equal y fps. In the following graph you can see the relationship between the ratio of the two velocities v2/v1 and the ratio m1/m2 of the masses. 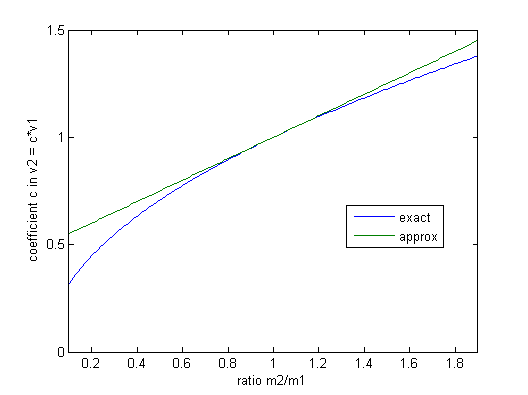 As you can see my rule of thumb is less than 10% off the "exact" formula if the new arrow is at least half as heavy and at most twice as heavy as the old one. But if you consider arrows with a weight difference of a factor two, then the initial assumption is probably get us a way bigger error.

In your example we have

Using the rule of thumb: In this case m1 and m2 are not really that close, so this result might be a bit off compared to the other one:

With the above values we have:

That means the (muzzle-) speed of the new arrow will be about 7% greater than the one of the old arrow.

In this case we get:

That would again mean the new arrow is about 7% faster than the old one. By the numbers you could guess that the approximation is about 3% off the "exact" value, as predicted.

If you have a weight difference of 10% (as long as the weights are close enough, it does not matter which one you consider as 100%) then the difference in velocity is going to be about 5%.

3
How should I clean epoxy out of the insert that goes in an arrow shaft?