On a coast to coast walk across Scotland, which areas would require the most self-sufficiency?

As a keen hiker with some time off I am considering a self-supported walk across Scotland.

Which route/locations would encompass the most self-sufficiency (wild camping/hammock locations) whilst bagging a considerable number of Munros and scenic beauty spots.

I am not looking for someone to plan my route; just wondering if any little-known routes have been established or used by the SE community.

Note (before anyone offers hiking advice): I am skilled in the outdoors, a medic, born in Scotland and comfortable with my perceived level of risk. I am specifically looking for itinerary suggestions off-the-beaten-path.

Add 1: As CMaster posted on another thread - "looking for an established route that avoids civilisation while passing as many noted scenic landmarks and Munros as possible."

Add 2: Thank you to Gerrit and CmMaster for repoiniting me from the Travel SE.

A fairly traditional and challenging route might start on the west coast at Inverie (shop, bunkhouse, remote pub!), which you must reach by sea on a passenger ferry from Mallaig.

Head into Knoydart, tackling Munros Meall Buidhe, Sgurr na Ciche (bothy at Sourlies), the head over the Glen Dessary Munros and Sgurr Mor (bothy at Kinbreak), then on to Tomdoun (hotel).

Then head to Clunes, and over the Loch Lochy Munros and maybe Ben Tee to Kilfinnan and along the Great Glen way to Fort Augustus (shop). Take the old military road (the Corrieairack) over to Melgarve (bothy) and then to Laggan and Newtonmore (shop).

Then all that remains(!) is to go east taking whatever route you fancy through or over the Cairngorms and as many Munros as you like (Glen Feshie [bothy] up onto the plateau for Sgor Gaoith, across to Braeriach, drop into the Lairig Ghru, Ben Macdui, Loch Avon [shelter stone] and then a long walk out towards Inchrory [bothy at Faindouran] and Cockbridge along Glen Avon.

From there you have a choice of flattish or hilly routes towards the coast at Stonehaven.

I'd prefer this east to west though. Nothing beats getting into Inverie for a pint at the Forge after slogging across Knoydart.

There are any number of variants - e.g. start at Shiel bridge or Glenelg, through to Kinlochourn (or along the south Glenshiel ridge) and then rejoin the route at Tomdoun. After you go down to Clunes you could then deviate entirely by heading to Glen Roy (bothy at Luib Chonnal) and then to Melgarve. Or you could head to Spean bridge, through the Lairig Leacach (bothy) to Corrour and then east to Ben Alder and then Dalwhinnie (shop), then over the east Drumochter Munros to Gaick and then Glen Feshie. This latter is longer, but perhaps better.

I think all of these variants will require you to be ~5 days away from food supplies. You also don't have to traverse high ground (the exception perhaps being getting across the Cairngorms from Glen Feshie, you would have to go a long way around, but lots of coast-to-coast folk do just that) - it is important to be realistic in Scotland and have a low-level backup plan; when the weather is grim you won't want to be hauling a big backpack over the Munros.

There are a large range nice routes you could do. Generally, I would say the further North you go the wilder/more remote it will be. Although if you go really far North, the options for Munros does decrease somewhat.

For specific routes, the "official" Scottish coast to coast goes from Oban to St. Andrews, and has some options for remote bits and Munros going through the Trossachs.

I haven't looked at it in detail but you could definitely do quite a nice route from Fort William to Aberdeen, taking in Ben Nevis, Glen Coe and the Cairgorms. This probably has the best options for Munros.

You could also do a nice route to Inverness, either starting at Fort William and up the Great Glen. Or Start by doing Skye. You could even go from Ullapool to Inverness, which would be remote but doesn't have that many Munros.

Unless, you particularly want to go coast to coast, there are many other nice long distance walks in Scotland. Lots of which are fairly remote or can easily be made so.

If you want to cross from west to east you could research the venerable TGO Challenge walk, where hundreds each May walk their own coast-to-coast route. If you Google "TGO Challenge" you'll find a large number of blogs discussing routes in detail.

As others have said, for maximum Munro bagging, you'd probably want to cross the Nevis range and the Cairngorms.

But don't discount the possibility of going south to north. Set off from around Fort William and you can cross Knoydart, Shiel, Affric, Torridon, Fisherfield, the Fannaichs and Assynt on your way to the north coast. You could use the Cape Wrath Trail as a starting point, and work out something higher-level on the ridges and tops around that. I'm hoping to do this myself next spring, and it would pass through some wild and wonderful country. 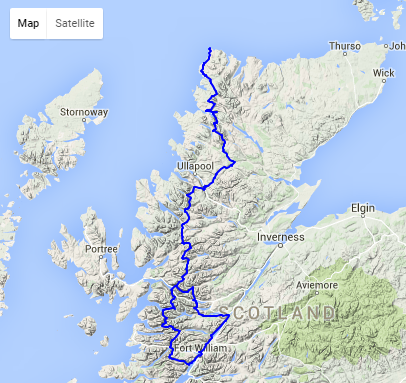 So many choices - and most of them great!

One possibility is that Kielder Forest Park covers quite a lot of the Scotland England border. This should provide enough wilderness for wild camping and exploration off the beaten track but is also close enough to the well established Berwick to Gretna trail that you have the option of a more 'civilised' route for some sections if you want. A more convoluted route could also take in sections of the Hadrian's Wall trail.

As with much of scotland Kielder is horrific for midges at certain times of the year but its is very pleasant walking territory.

A lot of it is forestry so tarps and hammocks should be viable although it does tend to be fairly dry conifer plantations so there may not be as much forage as in other parts of the country and, in my experience there water sources can be a bit sparse in some parts, especially in summer.

In terms of self sufficiency there is also a difference between just challenging and remote terrain where you need to carry everything you need to live on your back and areas where you can take more of a bushcraft type approach and make use of natural resources. Clearly the caveat with the latter approach is that you need either adopt a zero impact approach or get the landowner's permission if you are going to do any harvesting, foraging, hunting or fishing (or have an established legal and ethical right to do so).

Not the answer you're looking for? Browse other questions tagged hiking wild-camping trekking scotland or ask your own question.

12
Which month would be, on probability, the best month to trek on the Isle of Skye, Scotland?
9
Are there any areas in Southeast Asia where it would be safe to wild-camp with a tent in the mountains?