Is it possible to differentiate between a dog print and wolf print?

This question got my thinking:

Did I see a wolf's paw print?.

I did a bit of Googling and it appeared that wolf paw prints and dog paw prints are very very similar. Is there any good way (given that the size of a dog and wolf can be very similar) to differentiate between them?

No, there's no chance to distinguish the print of a large dog from one of a wolf. However, you can still differentiate between them, if you have a whole track. Dogs walk remarkable different than their ancestors. Compared to a wolf, a dog draws a sinuous line like it was drunk.

The best way to determine if wolves are present is to find their tracks. Wolf tracks are fairly easy to pick out, as they can be more than twice as big as a coyote’s. They can sometimes be confused with the tracks of large dogs, but the key is in how they walk. Whether it’s on a packed trail, or through deep snow, a wolf wastes very little energy while traveling. Their tracks are nearly always in a straight line, with the left and right paws only slightly offset (usually 6 inches or less). Compared to wolves, dogs walk like they’re drunk. Their tracks are distinctly scattered, and often appear more “wandering.”

Also, even on hard trails, dogs tend to drag their toes when they walk, whereas wolves generally leave a cleaner stride. In deep snow, distinct tracks are rarely visible. Look for a narrow trail with in-line footprints. When a pack runs through deep snow, they usually step in the same tracks as the wolf in front of them, which leaves even more pronounced prints. Also, you can usually see where their bodies have pushed a trail through the snow. The way they travel often makes it tough to determine how many are in a pack. 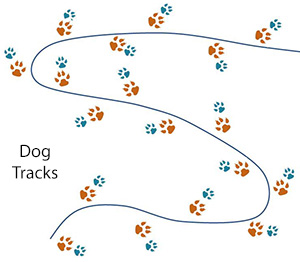 The diagrams above are exaggerated but clearly show, what one should have an eye on. Thanks to David Richerby for pointing this out.

It can be impossible to distinguish a large dog from a wolf from a single track. Instead, if possible look for the pattern of the trail left by the animal. Dogs’ pattern of walking reflects their domestic lifestyle. They do not rely on stealth, and tend to walk erratically. Their hind foot tracks seldom register within their forefoot tracks. They may also approach strange objects directly. Wolves on the other hand, tend to walk more directly when travelling. Their trails reflect this, as the track of the hind foot is placed within or directly in front of the forefoot. Wolves will also approach strange objects cautiously, often circling widely to investigate rather than approaching directly.

Diagrams (also with measurements in the [German language] text)

(Disclaimer: So far, the only wolves I've seen were in Canada [other than in zoos], and in terms of tracks, I'm aware only of dog tracks...)