Difference when using twin or half ropes

There are three types of ropes according to the UIAA/EN norm for climbing ropes: Single, half and twin. While the distinction between single ropes and the other two is rather obvious (one strand versus two parallel strands) it is not so clear for half and twin ropes.

What are the differences between half and twin ropes, i.e. what can I do with one that the other cannot and/or how do they behave differently?

Twin ropes can be as small as 6.9mm (35g/m), and are only used in pairs; you tie into two ropes, and clip both as though they were a single rope. This provides you with the redundancy of having more than one rope, but without the weight of carrying two single ropes. Twin ropes also allow a full-rope-length rappel which often strongly factors in the choice to use them over single ropes.

Half ropes, or double ropes, are larger (8 or 9mm), but not as big as single ropes. Again, you tie into two ropes, but clip them into separate lines of protection. This method is used when your protection points don't follow a nice line. Instead of zig-zagging your rope between points, you run two ropes to reduce friction and the potential of popping your pro out in the event of a fall. As with twin roping, you also have the benefit of full-rope-length rappel with the two ropes. 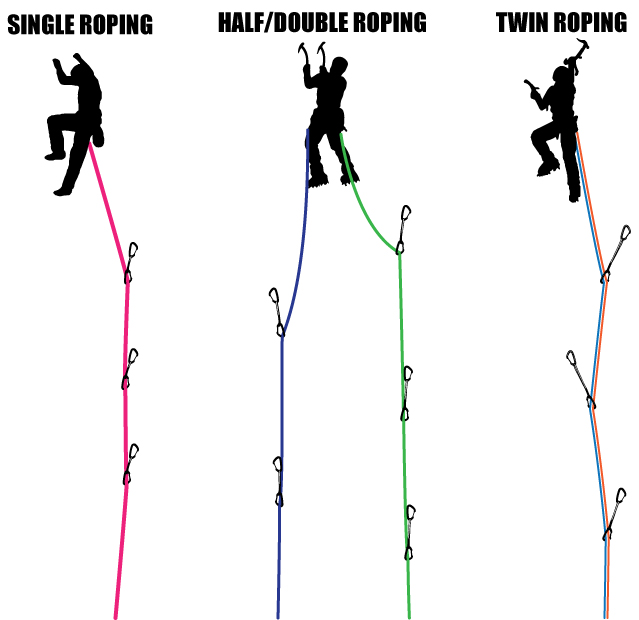 ShemSeger's answer already contains good information and a great self-made illustration. So please read it, I will merely expand on it.

With single and twin ropes, you need to belay the two seconds separately after each other or attach one in the middle of the rope. With half ropes you can belay two seconds at the same time each on one strand of the rope. For details see Belaying two seconds?.

One requirement for ropes defined by the EN/UIAA norm is the impact force ("Fangstoss" in German). This is the maximal force during a standard UIAA fall (quite complicated, simply: almost a factor 2 fall). The requirements differ for the three types:

What does that mean: You should not use single ropes like twins, the forces on you and the protection will be quite a bit higher. If you use half ropes like twins, the forces are higher too. For half ropes if rope management (and thus drag) is not the issue, it is a judgment call whether to clip both strands or just a single one: If falling down on a ledge is an issue, clip both, otherwise just one (lower forces on the protection and you when falling).

Disclaimer: The following is my own reasoning and neither standard practice nor endorsed by manufacturers/organisations/norms:
This is also of concern when climbing with children. As half ropes are tested on a single strand and children are in general quite a bit lighter than 55kg (otherwise they do not fall into the category children for the purposes of this answer), using a single half rope for them while leading can be a good choice. With a single rope children are stopped very abruptly. Due to the smaller impact force on half ropes, this is less of an issue. Of course you need to look out for rock edges along the route (so only do this on single pitches). This is however not standard use and should never be done unless you know yourself why you want and can do it.

Not the answer you're looking for? Browse other questions tagged gear climbing ropes or ask your own question.

14
What's the best way to swap lead when climbing in a group of three using a pair of half ropes?
12
Avoiding tangles when leading on double ropes
14
Trekking poles: what are the pros and cons of Anti-shock vs standard designs?
6
Do Half/Twin/Double Ropes get Middle Marked?
5
Double half hitch, versus two half hitches?
7
What kind of ropes are used for very long sport routes (like Chilam Balam)?
20
Compromised Ropes in Retail Stores
3
Redundancy in rappel systems