What can I provide to help a robin build her nest?

We went away for five days and came home to find a robin building a nest in the crook of the downspout of our gutter. I live in Massachusetts, in Northeast United States, so she's probably an American Robin, although they don't vary greatly from the European varieties. I've never seen a nest this close, and am thrilled! Although it's too high to see inside, it's still really exciting watching the robin come and go.

I don't know if this is her first nest ever, but it certainly is in that spot. Right now it looks like a lot of dried straw-like material hanging down, with a small solid section at the top. From pictures I've seen online, the top part should be more round and deep, so I don't think it is finished.

I know there are many factors involved in making a "successful" nest, and she won't lay eggs unless they're met. I've read here, here, and here that mud is an essential component, and is used as a middle layer to hold the nest together. The sources instruct that if there's no wet dirt available nearby, a container of mud should be left near the nest. Is there anything else I can provide to assist her in the building process?

Please excuse the lack of clarity in these pictures. I took them quickly while she was away, and I wanted to get them posted. Click on them for a larger view. 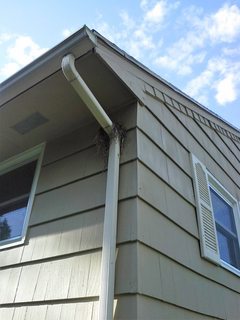 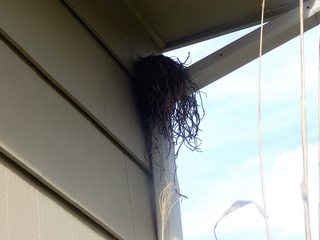 We have one spot under our back deck where Robin's make a nest every year, last year we had a nest with five eggs: 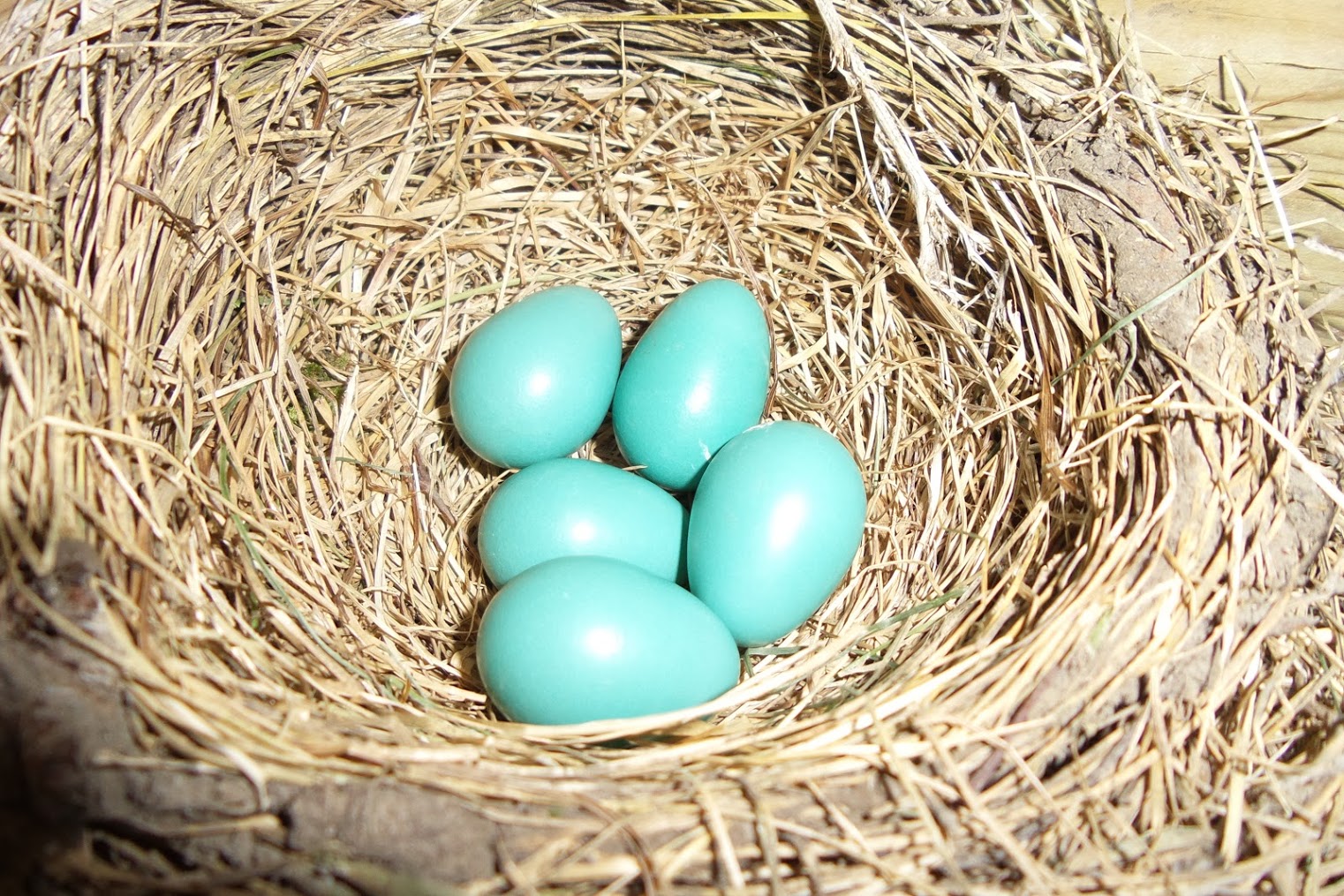 Every year, we did absolutely nothing to help them out, and they always did just fine. I did think that I could have helped a bit by giving them a couple worms when I poked my head in to take a look. Every time they'd hear something near by the nest, they'd pop they're heads up with their mouths open, which appeared to take a lot of exertion when they were small. I tried finding caterpillars and soft bugs for them to eat a couple of times, but while I was looking, Mom would always show up with a mouth full of grubs and sit on the fence waiting for me to leave so she could fly in and feed her chicks, so I just let them be after that. 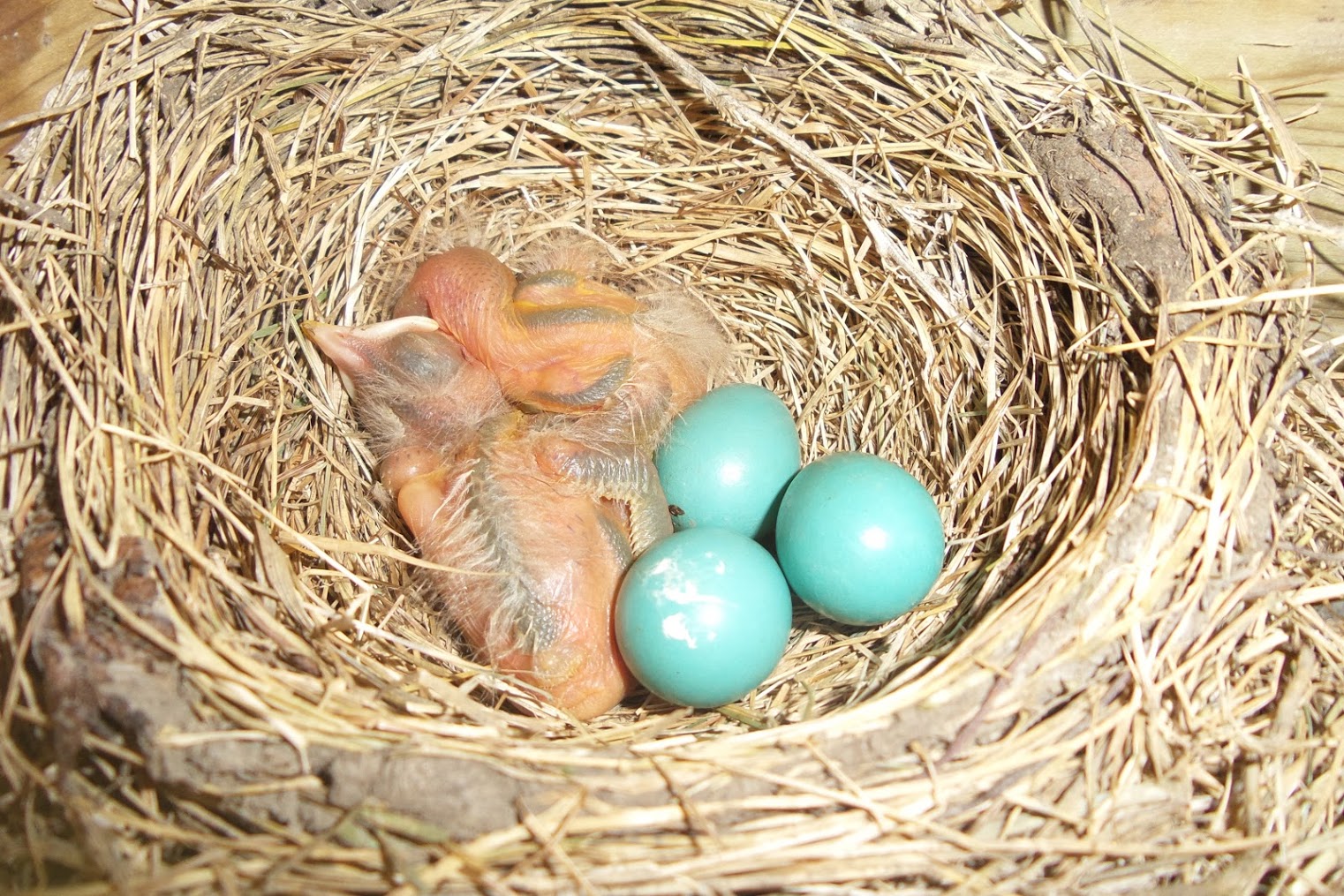 With the exception that not all of the eggs hatched last year, the chicks grew fast and promptly flew the coup. Don't expect your birds to be around for long, they'll likely only be there a couple weeks after they hatch, then they'll be big enough to fly. Believe it or not, the picture of them above was taken on June 18th, and the picture below was taken on June 25th, that's how much they grew in only a week. 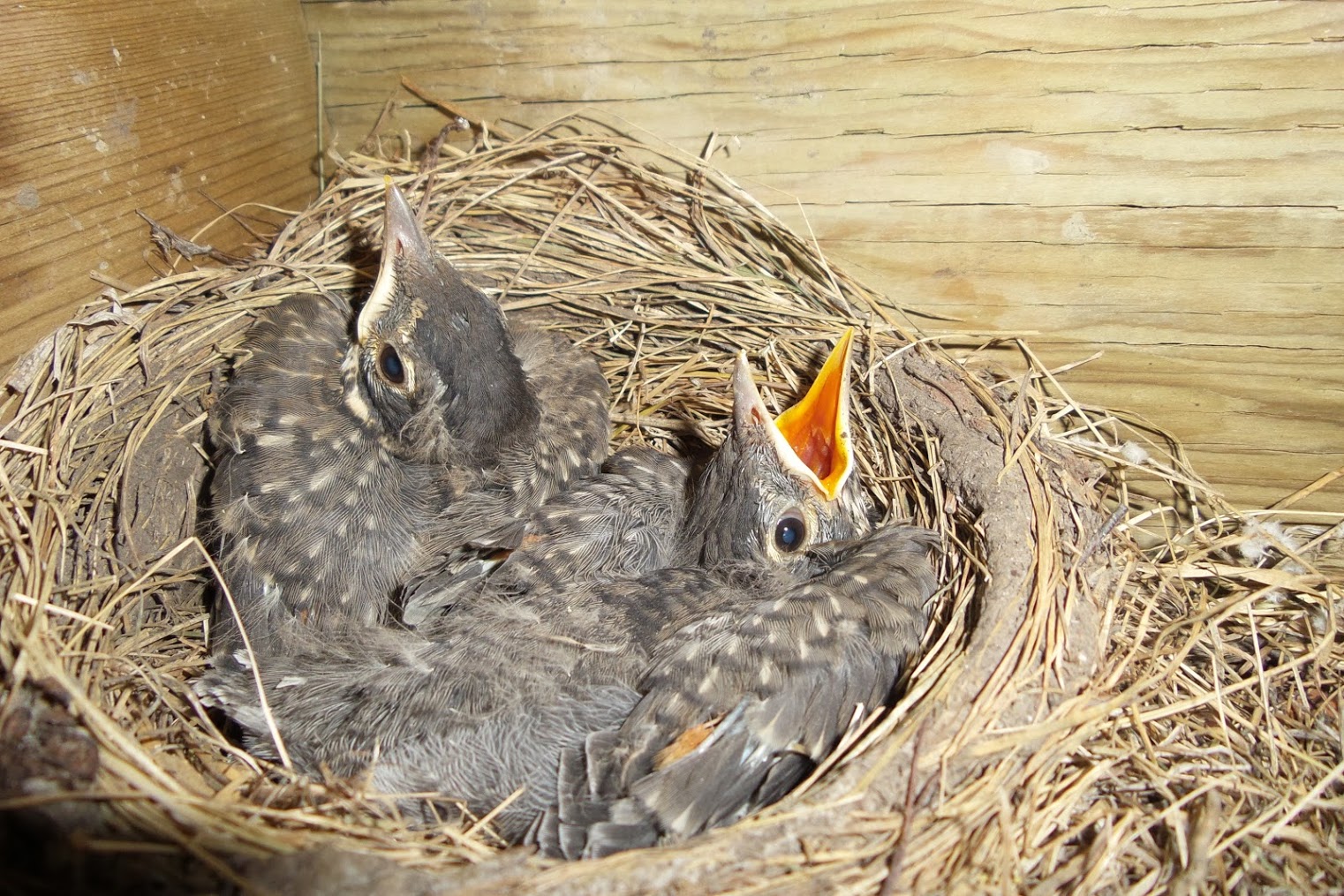 One thing that you can do to help your birds out, is after the babies fly away, or at the end of the season, is take down the nest. Birds don't typically reuse nests because old ones can be full of pests and parasites. Knock that old nest down once they're done with it, and they'll be able to build a nice clean new one in the same spot next year.

In your situation, I'd also try to avoid my downspout, knocking that thing around could disturb the birds.

The robin should be quite capable of building the nest on her own. Almost anywhere there should be enough dried grass and small twigs around. It is unlikely your robin is having trouble finding building material. The best thing you can do for the robin family is to give them space.

For your own enjoyment and perhaps that of others, you might install a small web cam a couple of feet from the nest. That way you can watch what develops without bothering the birds further after installing the camera.

I live in the UK and the first time I noticed Robin's nesting was in the top of a down pipe. Unfortunately the heavens opened and we had flash floods. The water filled up and the 6 babies died despite taking them to a rescue centre. I put up 2 Robin nest boxes directly underneath and around. Within 3 days they nested again. Each year I'm really lucky to have the Robin's come back. They nest at least 3 times a year. They have just had one brood fledge and I was lucky enough to watch all 4 leave successfully. (As a rule they don't hang around long though, however last year adult and babies fed from.my hand on the ground.)The nest box was emptied 2 days after flight day and 2 and a half weeks later, they have another nest built. I'm so lucky to have them. They are right by my kitchen window, just above head height and with their proximity to us, become very familiar. I'm intrigued to understand how or why it happens every year, as the life span isn't long and they've been coming now for 4 years.

4
How do you situate a protected bird house that is not under a branch?

5
What animal might uproot and relocate a newly-transplanted sedum?
9
Why do I never see robins in the woods?
12
What are these bulges? Are they harming the tree?
9
How far does a nursing Eastern Gray squirrel travel from her nest?
8
How can I tell the difference between an American Crow, and a Common Raven that lives in America?
10
What are some blind-friendly wildlife trails in or including Massachusetts?
7
Do backyard birds prefer birdbaths with moving water?
7
What is this black and white bird with thin brown legs and a multi-colored beak, found in Massachusetts USA in January?
4
Did a bear knock all my bird feeders down?
6
How can my neighbor encourage chipmunks to move away from her front-yard flower garden?