Is it safe to feed swans in the United Kingdom?

I've heard that a swan can break your arms with a flap of its wings, etc., but am not sure if that's true. There's a nature reserve - local to me - where the swans come up on foot out of the water and approach humans voluntarily, obviously looking for food. I've been feeding them (with appropriate things, not white bread) including holding out food in my hand for them to take.

Is this safe or have I just been lucky so far? - I was a bit intimidated as they seemed quite pushy asking for food once they knew I had it (I'm 5'5 and they come up to chest height to me!) and I didn't know how to respond! 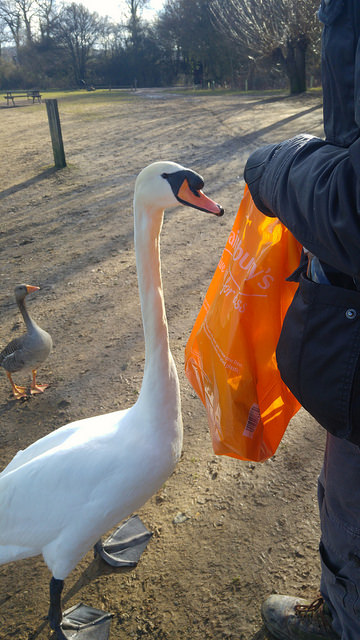 The "swans can break your arm" concept is rather lacking in evidence, though one once caused a kayaker to drown. They are a nuisance on the water, especially if you get between adults and their cygnets. Most of what they do, even when they're agitated, is an attempt to drive away a perceived threat, rather than a real act of aggression.

On the other hand, when they're used to people to the extent that they approach you, and you don't get between them and any young, there's no evidence that you'll come to any harm.

Not the answer you're looking for? Browse other questions tagged birds bird-behaviour national-parks bird-feeding or ask your own question.

10
Is there National Park-equivalent protected nature in the United Kingdom?
16
What should I feed ravens/crows?
7
Swans jammed together in a small pond
6
Are the seagulls begging or contentedly sighing?
19
What is the ecological justification (if any) for bird feeders?
12
Is it a pheasant? A grouse? What do I feed it?
6
What factors should be considered when helping to feed crows/ravens in the yard?
4
When and why were House Sparrows originally brought to the United States?
6
How can I help birds know how to feed from feeders?
11
Can a tag on the prey's leg harm a peregrine falcon if eaten?