What are these large black and white waterfowl with red around the eyes?

There's a pond located at a restaurant near where we live in Massachusetts. It's always very busy because the restaurant gives out food for the ducks, geese and swans. We've been there often and recently saw some magnificent creatures for the first time.

Although they resemble the other waterfowl, they're different in a number of ways. These guys are shiny, almost slick-looking. They're bigger than most of the ducks and geese. They have large chest and belly areas, and layers of wings, some very long.

The larger one has a black and white spotted chest, almost like a dalmation dog, and the wings are also black and white. There's a small ring of red around the eyes, and the bill is mostly black with a red stripe.

The white one is a little bit smaller, and has only a few black areas, primarily on the top of the head. It has red around the eyes, and also part of the face, and a pale pink bill.

My guess is that it's a mated pair, and the more colorful one is the male, but I'm only assuming that because in many bird species the male is more colorful. They appeared to be communicating, but with body position rather than sound. In the fifteen minutes we were there, we saw them walking together, both with chests puffed out; watching each other; and mimicking behaviors, such as preening and resting. At one point, the larger one lifted itself high and spread its wings to their fullest extent. It could have been stretching, but I suspect it was something else, again perhaps a form of communication. They were never more than a few inches apart.

I doubt they're native, though I can't say that for sure. It's a well-known stop along the migration route of the Canadian Snow Goose, so I imagine other things pass through which can be easily missed. We were blessed to have arrived at that auspicious moment so we could spend some time observing them.

I'd appreciate an identification, along with some general information about these unique and gorgeous beasts!

Unfortunately, my cell phone camera didn't really do them justice, so the pictures aren't great. Click on each one to see a larger view. 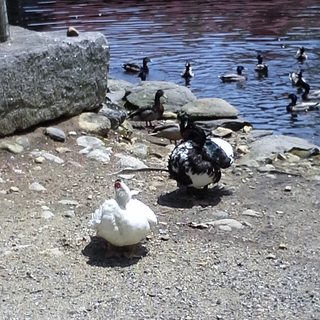 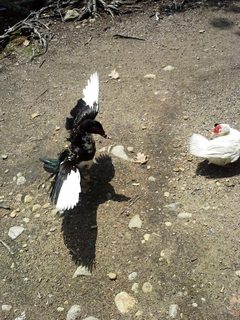 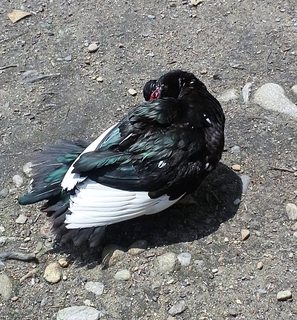 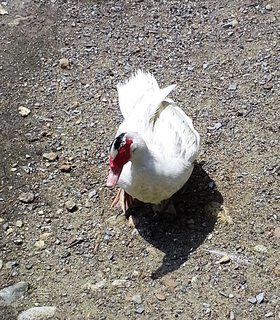 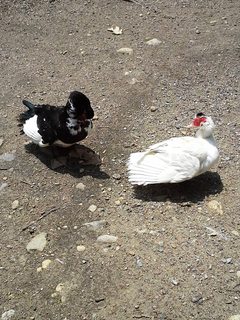 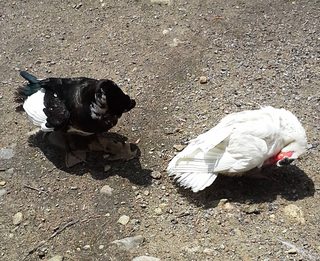 The birds in your photos are definitely Muscovy ducks as already mentioned by Lost. I simply would like to add a little more information on these gorgeous birds.

They are large ducks, with the males about 76 cm (30 in) long, and weighing up to 7 kg (15 lb). Females are considerably smaller, and only grow to 3 kg (6.6 lb), roughly half the males' size. The bird is predominantly black and white, with the back feathers being iridescent and glossy in males, while the females are more drab. The amount of white on the neck and head is variable, as well as the bill, which can be yellow, pink, black, or any mixture of these. They may have white patches or bars on the wings, which become more noticeable during flight. Both sexes have pink or red wattles around the bill, those of the male being larger and more brightly colored. - Wikipedia.

The facial differences between the male and female Muscovy ducks

Muscovy ducks are brownish-black in coloration, with iridescent green and purple dorsal plumage and white wing patches. The legs and feet are grayish-black and the iris is yellowish-brown. Males and females are similar in appearance, but males are nearly twice as large as females. In addition, males have a patch of bare black skin surrounded by pinkish-red caruncles (fleshy outgrowths) which extends from the back of the eye to the bill. Although relatively silent, the male produces a low hissing sound and the female has a short, weak "quack." - Ducks Unlimited. 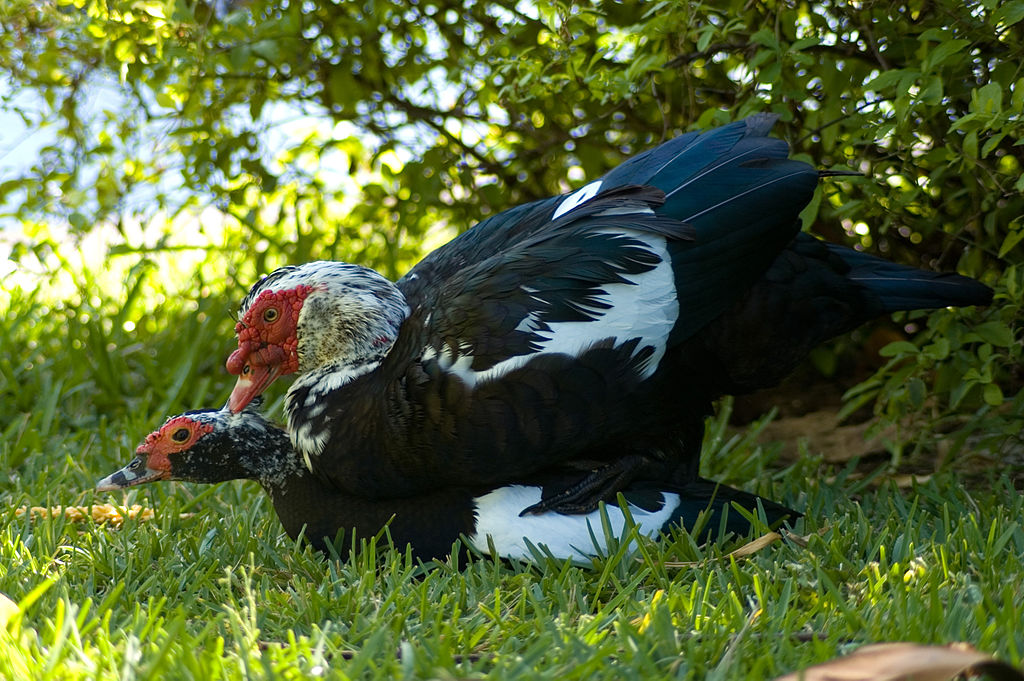 A mating pair of Muscovies.

Sorry to ruin your enchantment, but from the photos, it looks like a Muscovy duck: a species native to Central and South America and Mexico, but considered invasive in the United States.*

They are often acquired as pets, then released (or escape) and can quickly overrun an area. They are indicated in the transmission of disease, destruction of property, and competition with native species.

It is illegal to release them, and their possession and disposal are the subject of a Federal Control Order released in 2010 which states in part:

You may not retain for personal use or consumption, offer for sale, or sell a muscovy duck removed under authority of this section, nor may you release it in any other location

*Note: they are considered indigenous in 3 counties in Texas.

8
Help identifying black and white "square winged" bird?
3
What sort of crane, and what sort of snake?
11
Did I see an Osprey?
6
Is it safe to feed swans in the United Kingdom?
2
What is this gray bird that has black stripes on the side and around the head?
29
What is this animal with orange webbed feet, a white head with black stripes, and really likes breadcrumbs?
8
Why are common grackles standing on our bird feeders with their heads pointed straight up?
7
What is this black and white bird with thin brown legs and a multi-colored beak, found in Massachusetts USA in January?
3
Do doves go through a molting time of shedding and replacing their feathers?
4
What kind of bird in Michigan looks like a cardinal with black wings?