What might being certified as a polar bear guard involve?

I recently talked with a young geologist, some of whose field work is in the Arctic. We mostly talked about the science, but the geologist mentioned being certified (not sure of this word) to act as a polar bear guard. This involves killing the bear, if necessary.

My question: Does anyone know what training this certification (?) might require? Is any sort of simulation of actual conditions involved, and if so, what?

(Sorry, I am not going to get specific about where in the arctic because that might identify who I talked to.)

There is not a huge amount of information on the subject of a Polar Bear Guard Training Course. It seems to be a three day course that deals more on deterrent methods and polar bear protection, than on shooting these bears, although this too is included in the training. I am going to limit myself to Canada, although other counties do in fact have similar programs in place, I can not see a large amount of differences.

The Government of Nunavut’s bear deterrence program works collaboratively with communities, WWF, industry, other government departments and individuals to significantly reduce the number of bear-human conflicts. The new training course, which builds on the Polar Bear Guard Training course developed by Parks Canada as part of the International Polar Year, is another example of how partnerships help communities, businesses, industry, researchers, and government agencies across the territory. The new training resources will focus on the protection of people, property and polar bears through the use of proven detection and deterrent methods.

Recognizing the need for a standard training for polar bear guards, WWF has worked with the Government of Nunavut and Parks Canada over the past year to develop the new training package. - Department of Executive and Intergovernmental Affairs (Nunavut).

A Polar Bear Guard Training Course Offered in Iqaluit through the Nunavut Artic College, but I do not know how often the course is available.

In partnership with Parks Canada, the Nunavut Department of Environment, and BearWISE – WWF will roll out the new standard course for polar bear guard training in November 2013. This course combines the expertise of all collaborators to establish standards of practice and training for polar bear guards in Nunavut. The training will help communities across Nunavut deal with bear encounters – protecting people, property and polar bears. - WWF 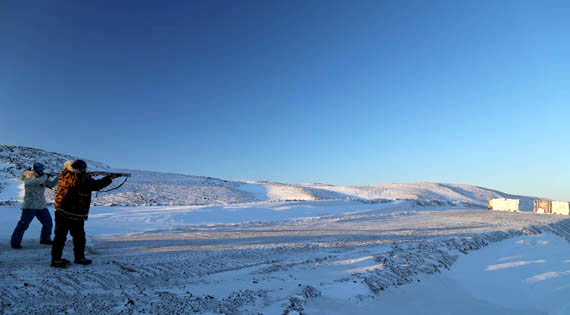 Two polar bear guards-in-training practice their marksmanship over the weekend at the shooting range in Iqaluit as part of a new program meant to reduce the number of human-polar bear conflicts in Nunavut. The training package was developed by the Government of Nunavut, the World Wildlife Foundation and Parks Canada to help protect "people, property and polar bears through the use of proven detection and deterrent methods," said a Nov. 27 joint press release. The training ran from Nov. 29 through to Dec. 1. (PHOTO BY VICKI SAHANATIEN/WWF CANADA) - Nunatsia Online.

Since deterrents sometimes fail, Polar Guards must be trained to bring down a polar bear if necessity requires it and it would seem to make sense that they must employ the prescribed requirements for ammunition and firearms as for hunting these bears.

Not the answer you're looking for? Browse other questions tagged bears arctic polar-bears or ask your own question.

5
Under what conditions can a guide be highly confident of protecting clients against brown bears without using firearms?

8
Does camping in polar bear country require someone to keep guard during the night?
6
How do people safely trek in polar bear country?
19
Bear spray vs. rifles against polar bears?
9
What to do when a black bear got a hold of an open bear can?
3
How to keep a llama from being eaten by a bear?
7
What happens to the bear after being pepper sprayed?
9
How serious is bear safety in the sub-polar Ural / Komi Republic / Yugyd Va?