What ropes could I use to suspend a hammock?

I use paracord for a lot of stuff but looking for something stronger, for holding up a hammock. I'm thinking it would need to be 1000lb strength or stronger.

Note: I do use wide webbing [protects the tree] for the tree part. The paracord/rope would be from the straps to the hammock.

The strength is dependent mainly on the angle between the two ropes form, on which the hammock is hung, and the weight you want the hammock to support.

For a traditional hammock the angles of the ropes (measured to the horizontal) are about A=30° (just an estimate). Lets assume we want to design the system for a person weighing W=200lbs. Then we can derive a formula for the force ( acting on the ropes using trigonometry: 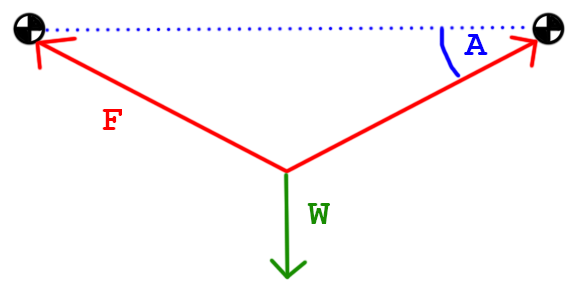 (Note that the Force gets extremely high, the closer to horizontal the ropes are / the close a is at 0°)

With the assumptions from above we get F = 200lbs, but this is just static loading, as soon as you "dynamically" sit down in it the forces can be higher. I'd go with a safety factor of about 5 to be on the absolute safe (that means 5 times the static weight it absolutely needs to support, consider that any knots weaken the rope, a knot can reduce the strength by up to 50%), so that results in about 1000lbs strength.

I have no experience using parachord, but this site also suggests to use rope of at least 700lbs - 1000lbs.

Another reference I just found is this online hammock anchor calculator.

Lastly, you need to connect your hammock, whoopee slings and tree straps - the best thing is some heavy duty karabiners. I try and keep everything rated at a 1000lbs which I think is overkill even if I can't get decent angles with everything else going on

Not the answer you're looking for? Browse other questions tagged ropes hammock paracord or ask your own question.

18
How do I attach a hammock to trees?
8
Which kind of rope should I buy to make an ultralight hammock suspension system?

18
Pros and Cons of paracord
19
Best rope for a rope swing
8
How to attach a shackle to vertical square tubes by using a rope?
12
Paracord rope strength
4
How to tie nylon straps to trees of unknown diameter
15
Using roof rails to set up hammock
3
Can I make a safe climbing-anchor with a 2-ton working-load sling that was meant for lifting vehicles?
6
What are the strongest knot(s) for using on FLAT webbing slings? (joining and bight termination)
1
What types of ropes are there for multi-purpose camping that are strong?
9
Most practical knots for a bend (tying two ropes together) while pulling to create tension?