How can I tell if a wild animal has rabies?

If I am in the wild and encounter an animal that I think might be rabid, how can I tell if it has rabies? An animal that has been running hard, or any number of other things could cause it to be foaming at the mouth, but not neccissarily have rabies. Foaming at the mouth is the symptom I most often consider to be a sign of rabies.

The horse in this image, is foaming at the mouth a lot, but I seriously doubt it is rabid 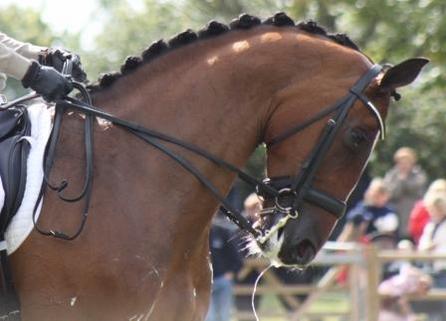 How should one properly dispose of a rabid animal carcass?

In order to understand the question of rabies and whether or not an animal is rabid, a little background information is necessary.

Once rabies infection occurs, the virus grows in muscle tissue and may go undetected for several days or months. During this incubation (or latent) period, the animal appears healthy and shows no sign of infection.

Usually within 1 to 3 months, the virus migrates to the nerves near the site of the infection and spreads to the spinal cord and brain (i.e., the central nervous system). It usually takes from 12 to 180 days to spread through the peripheral nerves to the central nervous system. At this point, the disease progresses rapidly, and the animal begins to show the classic behavioral signs of rabies. The virus spreads to the saliva, tears, breast milk and urine. The animal usually dies in 4 or 5 days.

Rabies causes typical symptoms. The infection progresses in a predictable manner, from the initial prodormal phase to the excitative, or furious, phase to the final paralytic phase.

The first sign usually is a change in behavior. Pet owners should be aware that behavioral changes can occur as a result of many conditions, from digestive disorders to poisoning.

Rabid animals usually stop eating and drinking, and may appear to want to be left alone. After the initial onset of symptoms, the animal may become vicious or begin to show signs of paralysis. Some rabid animals bite at the slightest provocation and others may be somnolent and difficult to arouse. Once the animal shows signs of paralysis, the disease progresses very quickly and the animal dies.

The early symptoms of rabies tend to be subtle, last 2 to 3 days, and include the following:

•Change in tone of the dog's bark

•Chewing at the bite site

They may show the following signs:

•Craving to eat anything, including inedible objects

•No fear of natural enemies (e.g., wild animals may not be afraid of people)

The third and final phase of infection usually lasts for 2 to 4 days. Initial symptoms include the following:

•Dropping of the lower jaw (in dogs)

•Inability to swallow, leading to drooling and foaming of saliva (i.e., "foaming at the mouth")

Paralysis then spreads to other parts of the body, the animal becomes depressed, rapidly enters a coma and dies. - Health Communities.

Nota Bene: This also depends on your area. For example the UK has been free of rabies since 1902. Much of Europe is now rabies free as is Australia. So if you do see an animal in these countries that exhibit some of these symptoms it is very unlikely to be rabies – Note added from the comment of Liam.

From the Humane Society

From the Merck Veterinary Manual

I found some YouTube videos of rabid animals to more clearly show the symptoms.

There are several symptoms that could indicate an animal may have rabies–they have already been shared in other answers to this question–but the only way to know for certain if an animal is actually rabid is to have the brain of the animal examined in a laboratory.

In the past I was CSPS and EMP Level III Advanced first-aid certified. In our training we were instructed that in the event of an animal attack where the animal is suspected of being rabid, we were to make the effort to capture the animal so that it could be tested for rabies. Specifically, we needed to send the head of the animal into the lab so the animals brain could be examined.

The treatment for rabies is intrusive to say the least. It requires multiple large vaccine injections to the abdomen to help your body identify and fight the virus. I had the process explained to me once by a nurse when I was a child. I had been bit (chewed on) by an animal I caught in a snare and was trying to release. I thought it would give me some sort of outdoors-credibility if I could say I was once bit by an animal and had to get vaccinated for rabies. After hearing about the agonizing process, and the resulting bruising and discomfort, I decided I'd be satisfied with just a scar.

Not the answer you're looking for? Browse other questions tagged safety horses rabies or ask your own question.

6
How should one properly dispose of a rabid animal carcass?

10
How can I tell when pemmican has spoiled?
10
How can you tell if a rocky outcropping (lookout) is safe?
8
How to tell if it's safe to jump an obstacle on horseback?
7
How to help a fox with rabies?
8
How to react to a fox in furious phase (rabies)?
6
How should one properly dispose of a rabid animal carcass?
20
How can I tell which way is "down wind"
12
How can you tell if roadkill is safe to eat?
6
How dangerous are wild horses?
8
Has a person ever got rabies from a marine mammal?