Extending a two bolt anchor with one sling?

I took some kids out climbing last night at a small crag popular for top roping, but I wasn't too impressed with their choice of anchor placements, or lack of additional hardware considering their placement. On one of the routes, if you were to clip into the bolt hangers, you'd be unavoidably crossroading your carabiners.

I had a 120cm nylon sling on me, so my solution was to extend the anchor over the bulge of rock like so: 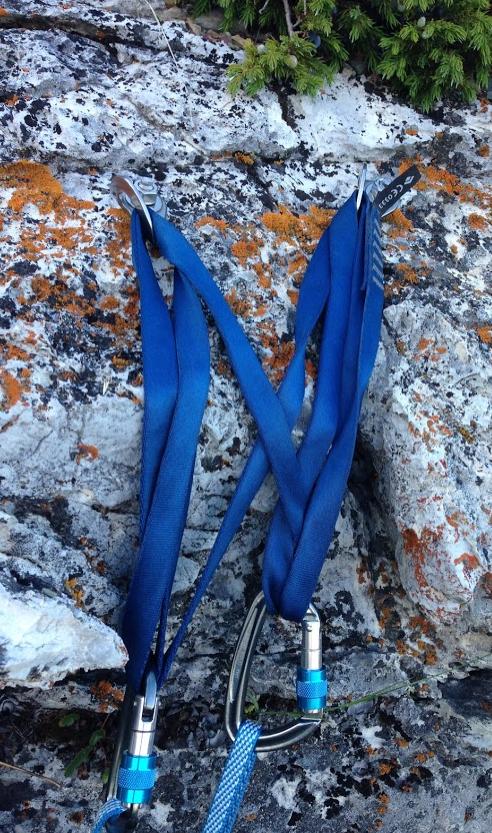 It seemed pretty SRENE to me, the only flaw was the potential for extension, but using a bulky nylon sling seemed to make extension less of an issue, when I unclipped one of my biners to test how it would extend, it simply didn't. The amount of friction generated from the nylon made it very difficult to pull through, I actually turned one of the hangers a bit while trying.

I always learned that bolts and any kind of webbing or cord is a no-go. Even if the edges are not sharp the webbing/cord is bent around a very small radius which weakens it significantly.

Today there is one new option: Kevlar cords. These can be used directly in bolts, as they are very abrasion resistant. So if you have any with you, this would be the ideal solution.

In your specific case with thick webbing twice through the bolt this problem is somewhat smaller, still I wouldn't do it. My goto mountaineering book has one solution to your problem, which is admittedly looking weird but it works. You need a biner and a stopper. You pull back the "nut" of the stopper so that you can pull the protruding wire loop through the bolt. Behind the bolt you clip the biner into this wire loop and arrange it such that the long side (opposite of gate) lies flat on the bolt. Now you can use the other end of the stopper as your attachment point (as you normally would with a stopper). The biner is in a similar function as when using with an tuber in guide mode. A stopper is used for its steel cable which is not prone to abrasion/weakening over the edge of the bolt. 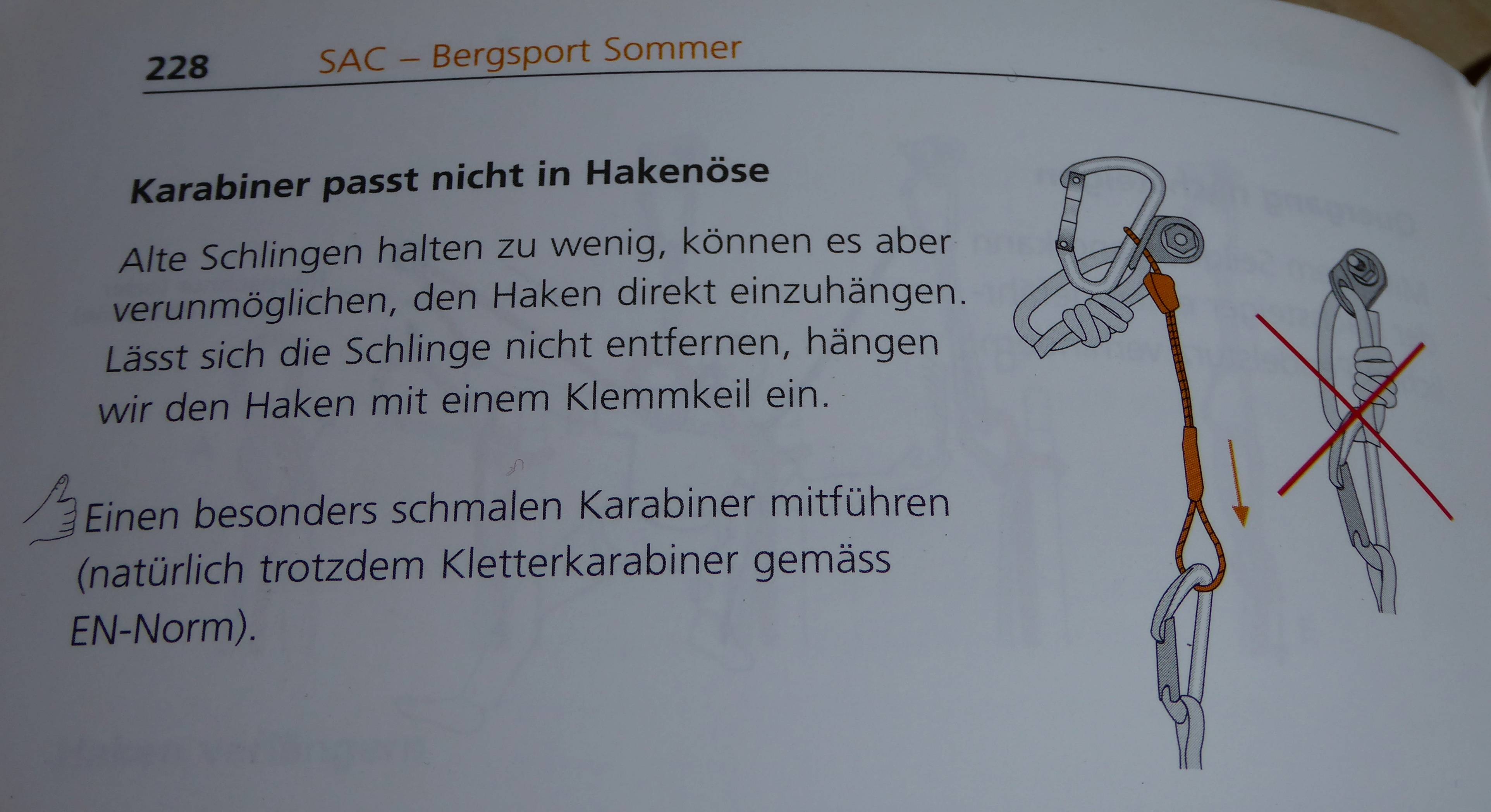 The simple answer is again: This is a no-go. Always use a fixed central point or at least stopper knots. There may be a lot of friction in your particular setup, maybe even enough when fully loaded. Still this is a bad idea, as it removes the redundancy. If one of your two points breaks (unlikely but possible), then there will be a static fall into the second (in your case braked by friction, but still). Especially now as you also have webbing over a thin edge, this would be too much risk factors for my liking. If it is a anchor you walk to on top then you will probably never attach to it directly so there is always the rope between the climber/belayer and the relay which is an elastic element. So there wont be a static fall. Still you will have an unnecessarily bigger force.
A fixed central point does not have this fallacy and the potentially unequal load is really not an issue. One bolt is strong enough, the second one is just redundancy for the very seldom special case (badly placed anchor, ...).

Because I trust my biners way more than I trust a sling threaded though bolts, I consider a relying on (my) single biner safer than the above set up.

With the hardware visible to me in that picture I would make a single point anchor using two biners, sling and one bolt, and back it up with the sling though the other bolt providing redundancy.

Effectively close to what you did but one of the biners moved off sling to the bolt hanger and add a stopper knot.

The system has no cross loaded biners, is redundant (except for the single screw gate biner on the rope end ) and does not rely on slings threaded though bolts.

Essentially it appears the sling though hanger has a breaking strain of about 10kn and is considered an acceptable setup, more widely used in some areas than others (This is very common and wonders how much science exists in climbing vs "doing the way I was shown" ). The only thing missing is the stopper knot. Therefore if the biner could not be placed correctly in the hanger, sling though hanger (with stopper knot) is acceptable.

In general, if you do not feel confident in the setup of the anchor, choose a different climb. Also sometimes belaying from the top can make difficult belays much easier. Top roping on a top belay has advantages (e.g., less rope stretch) and disadvantages (cannot see climber while tying in).

For your anchor. I don't like your setup at all. It is not clear to me why you used slings on the blots and then your Trango Alpine Anchor. Seems like you should have been able to simplify things.

The thing I really do not like is that the webbing appears to be a single point of failure. Further, it is run directly through the bolts and is rubbing against the rock which increases the chance of it getting cut. There also appears to be a weird edge on the bottom left of the photo which might cut the webbing. There is also what looks like a rope pull grove on the bottom right that might have sharp edges.

In an unattended top rope anchor I will trust metal over webbing every time. A carabiner should be able to hold all top rope falls no matter how weirdly it is weighted. I would have most likely clipped the Trango Alpine Anchor directly to the two bolts.

Given that you have the Trango Alpine anchor I would use that: 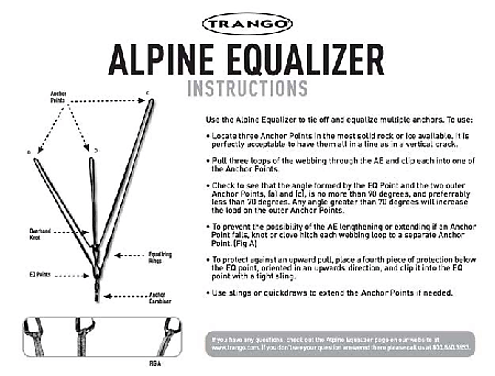 Put the two biners directly in the bolt, attach them to the anchor points of the Trango. You must have a biner at the master point of the Trango anyway.

Using only the sling, biners + the one you must have for the rope (possibly backed up by a non-locking if you don't have locking biner), something like this would be better:

You are right to extend the anchor point to below the edge, make sure there are no sharp edges that could damage the sling.

My suggestion would be to use your long sling and place three carabiners with clove hitches into it. This offers the following advantages:

15
Toproping with two ropes joined by a double fisherman's
16
Placing protection efficiently when leading trad?
7
Chaining locking carabiners
7
Can you clean new bolt holes with water?
6
Is it OK to keep a dyneema sling under constant tension (slackline)?
8
When making an anchor with static rope around a boulder, what knot should I use
12
What to do when one point in a climbing anchor breaks?
3
Can I make a safe climbing-anchor with a 2-ton working-load sling that was meant for lifting vehicles?
3
Belaying with two hands below atc