How do you make an emergency water filter and purifier?

How do you make an effective water filter using the natural elements of the great outdoors?

Suppose your only source of water was dirty and questionable at best. How could you make it potable without having to boil it and using only what mother nature has to provide?

I've never made one before, but I imagine it involves sand to filter out the grits, and probably charcoal to absorb the nastiness, as well as a couple other layers for reasons; like herbs that may be effective in killing microbials or some other form of alchemy that will make it safer to drink.

How do you make your own water filter when you're in a desperate situation?

Much like Charlie's gravity filter in a bottle, this filter is essentially the same, only using a cone of tree bark in place of the bottle, and using extra filtration layers instead of a coffee filter or bit of cloth: 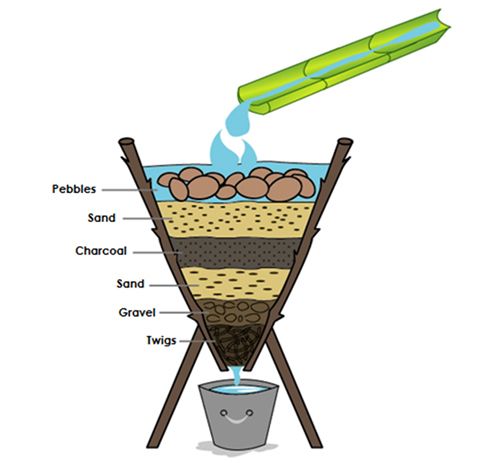 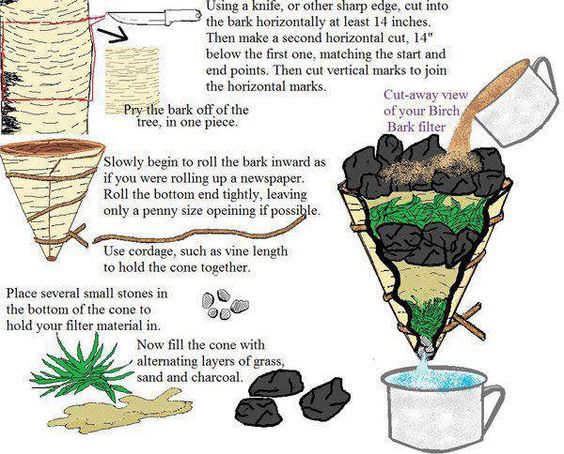 Using a shirt, or bag with a hole in the bottom, or whatever bits of material you can spare, you can set up a tripod filter as shown below: 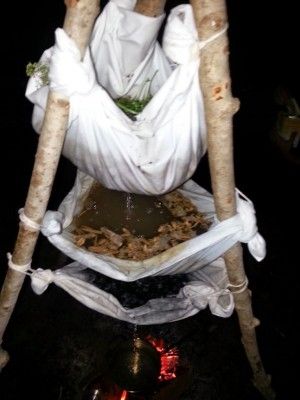 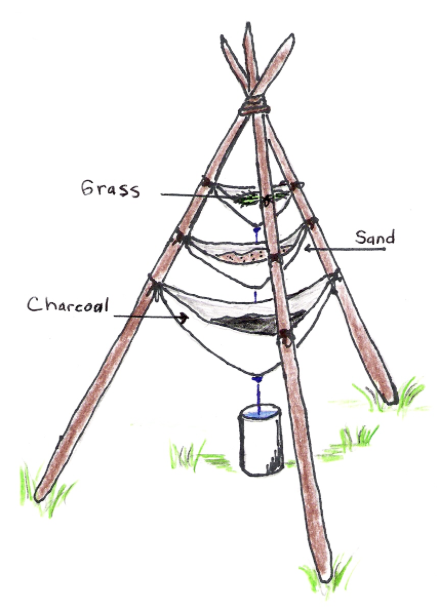 These filters appear to only be effective at cleaning the water of dirt and debris, boiling the water is still recommended for purifying the water and killing anything that might make it through your filter, though any poisons should be mostly absorbed by the charcoal.

What remains to be discovered is what could potentially be used in either of these systems to purify the water as much as possible without boiling.

The following are layers you can include in your filter, and what they accomplish:

Here is what I have found for a very basic set up with a cheap water bottle. The water will be pored through the top through gravel, sand, charcoal and finally either a screen or another mechanism like a hankerchief to prevent the filtering substances from getting into the water.

For more information I would suggest this instructable.

Define dirty. The question says potable. The stuff that will hurt you requires very fine filtration that I don't think is feasible using natural elements. Filters for protozoan cysts and bacteria typically filter to 0.2 microns

Yes you can filter larger particulate matter (e.g. dirt) but that is not (typically) the dangerous stuff.

Is Water Treatment Even Necessary?
Q: Why do I need to treat water in wilderness areas?

A: Regardless of how pure water may look, any water source on the planet could be tainted with microscopic waterborne pathogens—disease-causing pests that, if ingested, could cause severe diarrhea, cramps, vomiting and fever.

Recent research, though, suggests that wilderness water at higher elevations is much cleaner than previously believed. Some experts argue that the blame for intestinal infections is more often traceable to preexisting conditions and lax sanitation, particularly unwashed hands.

Q: What's in wilderness water that can affect me?

A: Three groups of waterborne critters are most commonly linked to water-related illness:

Not the answer you're looking for? Browse other questions tagged survival water-purification or ask your own question.

30
Do you need to purify all mountain water sources
33
What are the different methods to purify water?
31
Should I eat when I don't have anything to drink in a survival situations?
14
Filtering fine silt/mud from water (not necessarily bacteria etc.)
13
What backwoods trick to get pure water produces the most safe water?
14
How do you boil water without a proper container?
3
When is improvised water filtration warranted for survival?

12
Will any filter/pump purifier last through longer hikes?
15
Safe to use Old Water Filter?
6
How to clean the ceramic filter of a water pump?
5
Water filter that handles mercury?
0
Is there a portable fluoride water filter?
16
How do I test my water filter?
14
How do you boil water without a proper container?
3
When is improvised water filtration warranted for survival?
3
How can I clean water filter's intake filter?