Will a Rocky Mountain Goat attack a person? 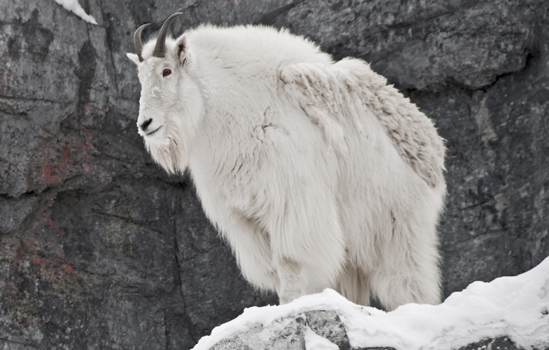 We went to Gargantua this weekend, I've been going at least once a year for the past few years, and it's not uncommon to see rocky mountain goats up at that elevation, but this time around we ran into a family of nine, some of which were hanging out right in the cave entrance. 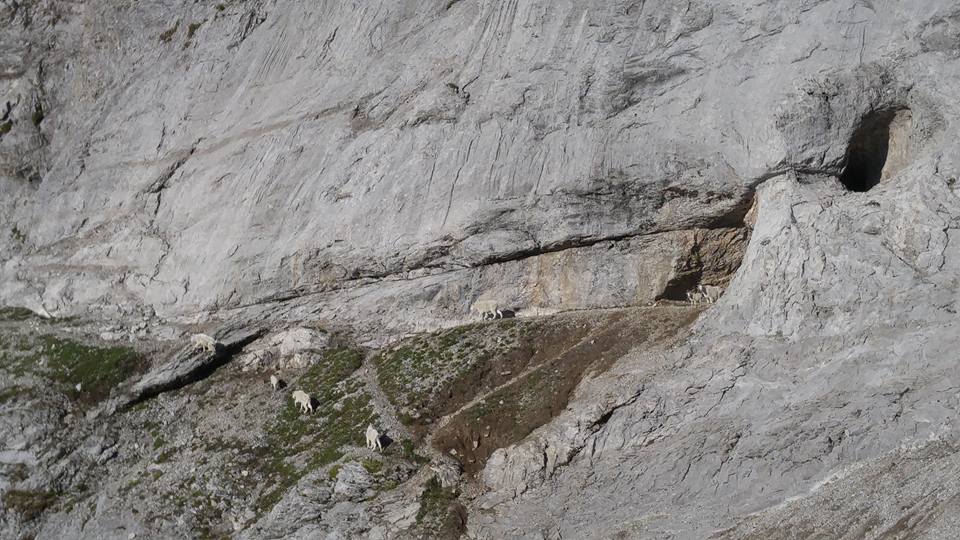 Just inside the cave entrance, I'd live here if I was a Mountain goat: 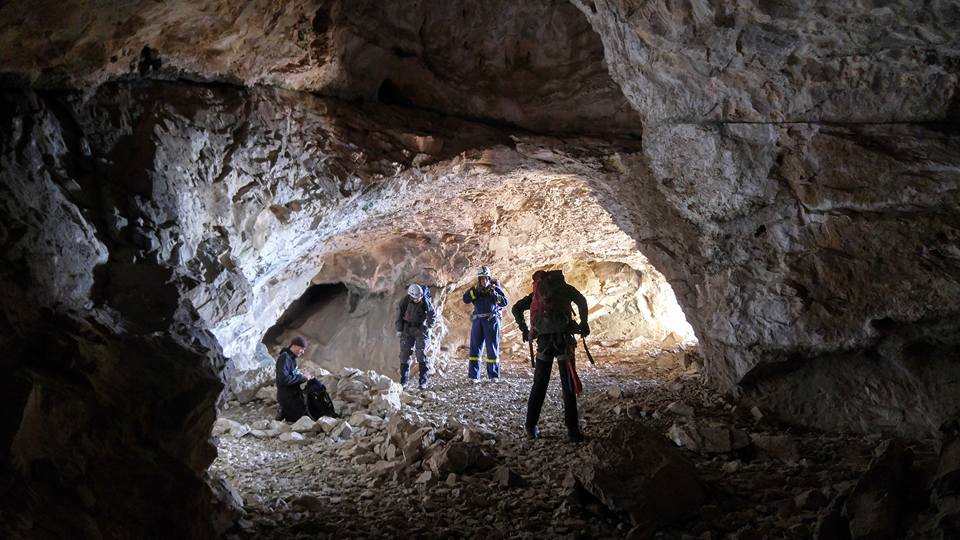 I'm not really fond of mountain goats... They're big (up to +300lbs/140kg!), they're muscular, they can scramble up cliff faces faster than I can fall down them, and they have sharp pointy horns that hook just enough to rip your bowels out after they gore you. Also, in my experience, despite what I'm told about goats, they aren't really afraid of humans. I'm not very fond of any animal in the woods that isn't afraid of humans. Last time we came out of these caves there was a goat just around the arrete from the exit (image at bottom). He seemed to challenge us, and kept moving closer instead of bolting like most hoofed animals do in the rockies.

There are eight goats in the picture, we came up behind some of them on our final approach to the cave, and they scrambled back over to the entrance to meet up with the others as the five of us approached (with me shouting at them to move along). The ninth goat was a big billy that had the high ground directly above us before we even knew he was there (no picture). I've had this happen a couple times; where we've run into a goat high up above the treeline, and it doesn't run away, instead it gets the high ground directly above you.

What I want to know is what that billy was planning on doing. There were a fews kids in the herd, no doubt his offspring, and I've seen videos of ibex and rams diving off rocks horns-first at each other. Would a mountain goat attack a human? Was his grab at the high ground defensive, or offensive? 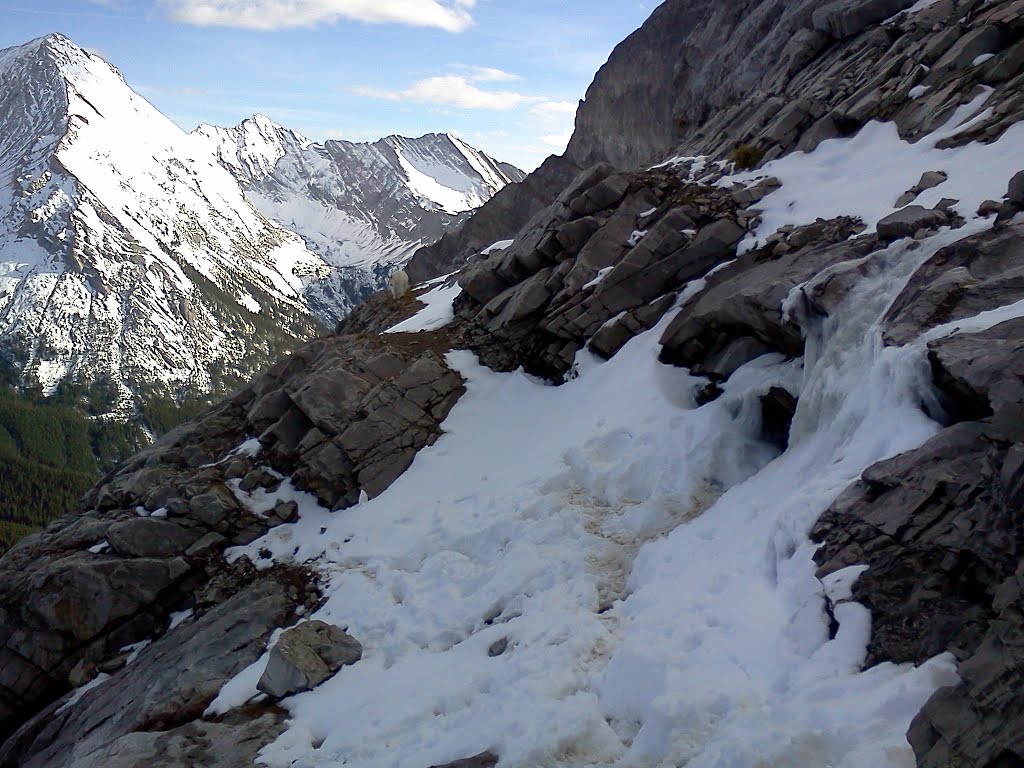 We popped out from underground then discovered this guy up around the corner just before heading out. He kept approaching us as if he were intent on standing his ground and driving us off.

The only case I kind find of a human being killed by a mountain goat happened in Olympic National Park in 2010. It seems that attacks extremely rare but have happened. It that particular case the mountain goat was known to harass hikers and had been around humans before.

As far as why a mountain goat would take the high ground, its probably just seeking the most advantages position that it can get. I don't know if it is a sign that it is about to attack, or preparing for defense, but in either case, being higher than you or a predator or a rival male would give it an advantage.

While I have not interacted with mountain goats, I used to have a farm with Saanen goats. Goats declare dominance by having the highest position. If they pick high ground and you picker higher ground there will be a problem. A goat will ram you with it's head, or push against you, they are strong and have four feet designed for high traction. You will probably lose if you get into a shoving match with a goat on a cliff.

It has been several years, but I as I recall if you just let them have the high ground, and move on no problem. When they come at you, their horns look like a good handle, and they are. But you will increase the goats aggression if you grab the horn. You can use the horn to redirect the goat, and the two of you kind of dance, like that but now you have an angry goat by the horn. Before he was just playing king of the mountain, know he is not playing, and he is mad.

Thank you for the insight here. I just had an experience today that was very similar. I was walking along a desert wash in a VERY remote area (I was the only human within 10 miles) when all of a sudden I saw 6 mountain goats above me. They did not seem to be merely passing through. They all turned and stared me down. I waved at them in a very friendly manner to signal that I was not aggressive. I thought that would be the end of our interaction. I then passed around a corner of the wash and saw that they had followed me, going up and over a cliff face to get to the next turn. Once again, I waived to show that I wasn't being aggressive, while making eye contact to let them know I wasn't afraid. As I continued to walk, they kept staring me down. At that point, I went into a bit of survival mode and thought of what I would do to defend myself. If they stalked me, I would run up one of the sides of the wash and throw stones at them until they ran away. I was fully prepared to do so. But I prayed it wouldn't come to that. I love animals way too much to do that, unless it is absolutely necessary. Thankfully, the goats then scurried off and disappeared. BUT, I left with the distinct impression that they were stalking me, or at the very least, 'testing me'.

MY ADVICE: Keep your distance from goats, do not think of them as "cute animals" or "pets". Respect their boundaries at all times. If they come off as aggressive look them dead in the eye and stand still. Let them know you are not afraid, but at the same time, that you are not hostile. I also think that waving is a good gesture. It is a way of letting them know you wish them well, and I believe they can sense that.

Not the answer you're looking for? Browse other questions tagged animal-behaviour rocky-mountain-goats or ask your own question.

5
How would you protect yourself from Rocky Mountain Goats?
7
At what age do black bear cubs have a good chance of surviving on their own?
9
Do squirrels have front and full peripheral vision?
3
How warm does it need to be for bats to come out of their caves?
6
Will ibexes react aggressively or flee if approached on a mountain?
4
Did a bear knock all my bird feeders down?
16
Will a coyote attack my dog on a leash while I'm on a hiking trail?
2
Why would a Rocky Mountain Goat be making scrapes in the ground?
3
Where to find Rocky Mountain Goats?
2
How do they capture Rocky Mountain Goats in order to relocate them?