Roughly 10 years ago I hiked up Lassen Peak in Northern California, and there was a huge (hundreds of thousands) butterfly migration going right over the top of the peak around this time of year. It was an amazing sight that I would love to share with my children but I don't know of any good resources that will let me know when the butterflies are passing over the peak. I was under the impression that this was part of an annual migration to Mexico. However, the park website states their migrations are human caused:

One of the most noticeable species is the California Tortoise Shell butterfly. These butterflies are orange-brown in color and can be seen by the thousands at times especially on the tops of peaks where wind currents have carried them. These population explosions are believed to be movements from areas that have been defoliated to new areas in search of a food source.

What is the real scoop is this an annual migration or something else?

Gratuitous picture below that I took and here is a link to a YouTube video that someone else took. Neither one really captures the scale of the event though. 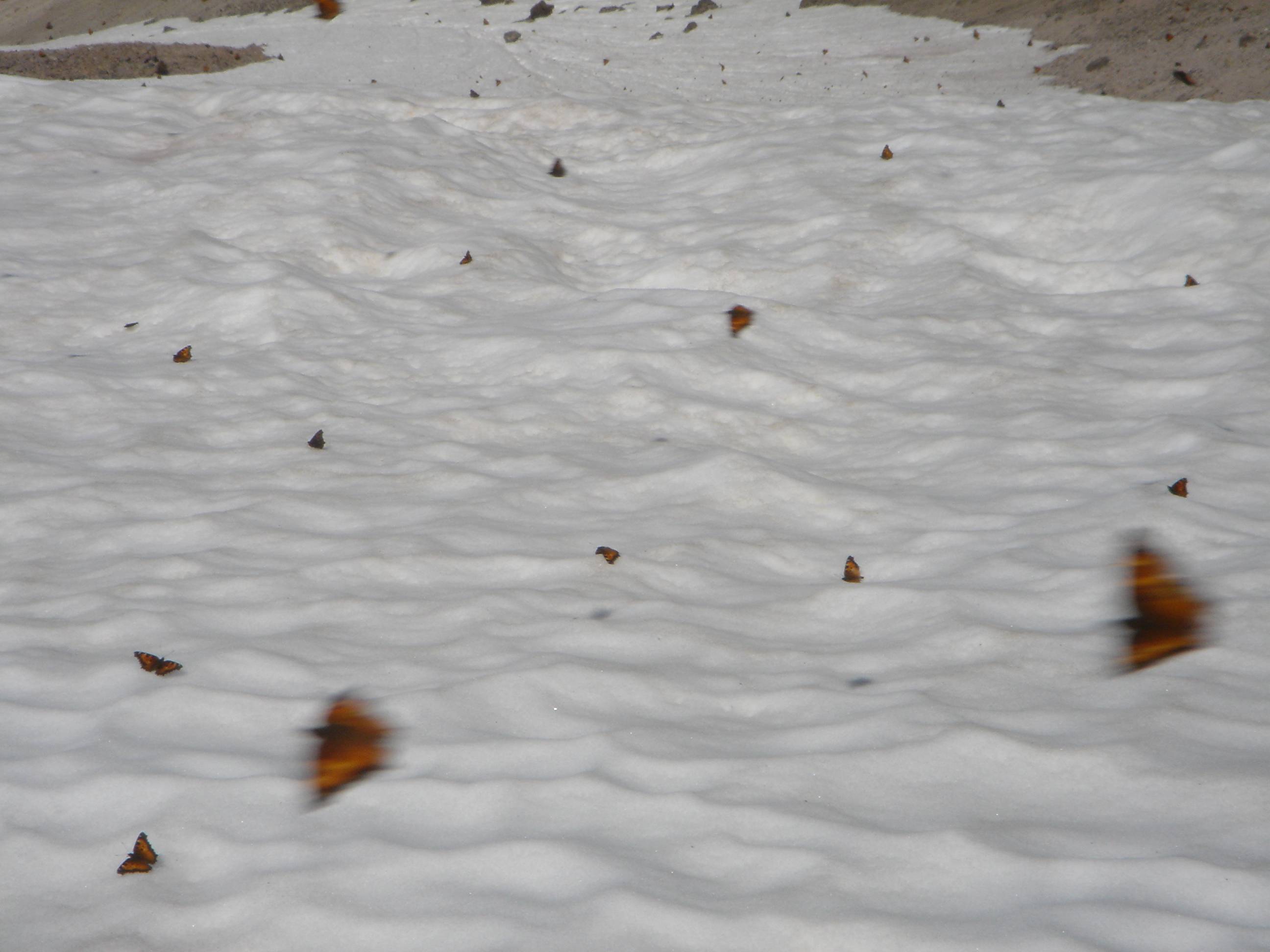 I just spoke with a park ranger at Lassen Volcanic National Park. I was told that the huge group of California Tortoiseshell butterflies, Nymphalis californica, spend time at the summit pretty much every year, including this one, so it is considered an annual occurrence, although the numbers vary. Unfortunately, you just missed them. They arrived in Mid-July and stayed approximately three weeks, which is common, and would definitely correspond to your sighting on August 5th. She said you can call the park beginning in July, and a ranger will tell you whether or not they've arrived, so maybe you can go next year. I don't know how quickly you can plan a trip, but it's nice to know that you have a window of a few weeks for a potential viewing.

When asked about migration, she said that because some overwinter in California, (frequently Orange County) Oregon, Washington State and other locations, they don't know the pattern of the exact groups seen on Lassen:

The migration origination and destination are unknown. The tour guides teach that the mystery is part of the fun!

They do have working theories as to why they're at Lassen, based on years of observation and scientific research, although there is an element of speculation. The two most probable reasons are:

As for sources to help plan other times and places to see them, I highly recommend the Butterflies and Moths of North America website. In addition to detailed information about the species, it includes a sightings map and a sightings table. Sightings are individually listed, and are continuously updated, the most recent being on Mount Tyndall in the Sierra Nevadas. I'm on the East Coast, so I don't know the geography of your region. I may be pointing to things way out of your way! Those sightings are not always the great phenomenon of numbers, though, so you might want to read through them carefully, unless you just want to find a place to see the butterflies in person. Your kids might like to get a closer look either way.

That site also states that some of the Tortoiseshells overwinter in parts of California. Of those that don't, the range is generally

I asked you about Crater Lake because the droves of tortoise shells at Crater Lake National Park have been recorded and studied since 1929. Mention is made of witnessing them by the thousands in a park publication from September of 1930.

Also, according to a Nature Notes from Crater Lake publication from 1951, that was a very prolific year, although they got there a little bit later, at the beginning of August, and stay later into September. Of note, though, is that they're not mentioned as being there annually, so I'd check with that park specifically. I didn't call, but it's possible they could be there right now!

4
What is a lava tube, as a place to see bats? Are there any in the United States?

12
Logs & Rocks - Step on or over?
6
Identifying named peaks from the summit of a north-american peak
3
An x-hour hike. Is that to the peak/summit or back and forth?
7
Prohibited to walk through/over historical significant areas?
9
Snowshoe hare migration patterns through changing seasons
3
Marked trail off the Beartooth Highway to a peak
8
What is a butterfly tag, and what's the procedure for applying it?
5
Gear for slush-over-ice
4
There have been a family of hedgehogs in my garden over the winter and the mother has recently disappeared
28
Is it possible to hike over 30km per day?