What are these round, spiny, puffy, green things from the ocean in Northeast United States?

Last October, we were on a road above a beach in a small town near Bar Harbor, Maine, in the Northeast United States. We looked down and saw two fishermen loading their trucks with piles of something fascinating they had just brought in from the ocean with large nets.

I'm trying to learn what they are, and for what purpose they're used.

They're round, probably 5 inches in diameter, spiky, and mostly green with a bit of brown. The fisherman was inspecting one closely in his hands, and we were able to get a good picture of that. I didn't get a close-up of the other side, but some in the pile look more puffy, so maybe those were upside-down, or right-side up, depending on what it actually is! At first I thought they were totally covered in those spikes. However, if you click to enlarge the picture and look closely in the middle, there's something that almost looks like it could be a mouth or other opening.

My guess is they either end up in salt water aquariums, or at a type of restaurant where I've never been.

I know all seaweeds are alive, so I assume they're alive at the time of harvesting, although I don't know for how much longer, especially in a big pile on a hot day. Are they some type of sea plant, or animal in the sense that we generally think of animals? If it's the latter, and they're bound for a restaurant, what and where are the individual body parts? What parts are edible? How are they served?

If they are indeed edible, and someone has actually tasted or cooked with one, and has something more familiar to compare it with, I'd love to know that. 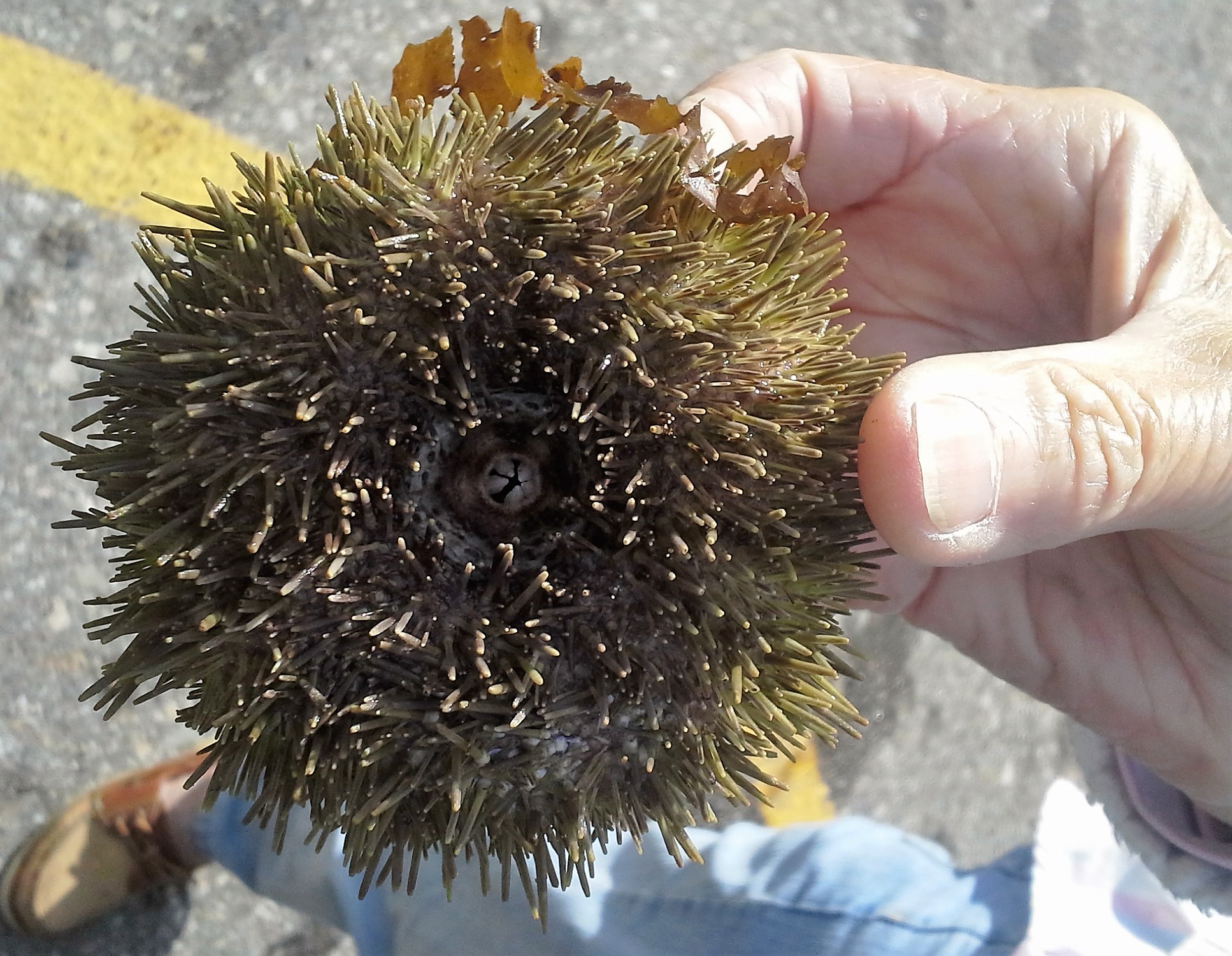 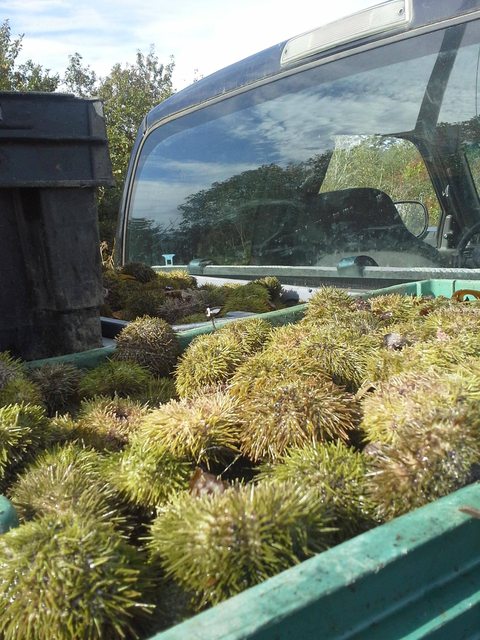 As the other answer suggests, this is a sea urchin. Specifically, it appears to be a commonly caught species off Maine called Strongylocentrus droebachienisis, which is commonly called the green sea urchin (or Atlantic green urchin). 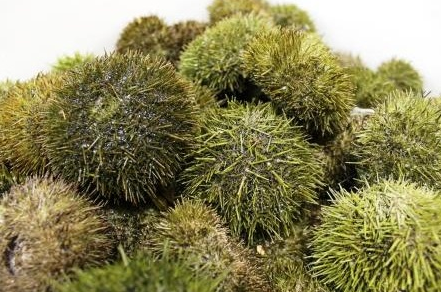 The OP's image shows the urchin's mouthparts (the so-called "teeth" of Aristotle's lantern), which they use for scraping substrates for food. You can see an urchin moving it's mouthparts below:

Spiny Sea Urchins (Atlantic Green Urchins) are found along the coast of Maine through the Canadian Maritimes and yield creamy “Uni” – the corral, or roe, of the urchin. Ours come in ocean fresh and are processed right here in Portland, Maine.

Removed from their shell, the bright yellow-to orange lobes are perfect for traditional sushi or sashimi dishes, or just with a little lemon. Uni is also used sauced over pasta or noodles, pureed with butter to finish seafood sauces, as a decorative garnish, and in hors d’oeuvres, stews and soups, omelettes and souflettes

In case you're wondering, brownetrading.co also suggests that this echinoderm is slightly sweet with a delicate, and buttery texture.

They are Sea Urchins and they taste like mussels. People mostly eat them raw.

Oh yeah, you'll peel off the shell and go for the slimy flesh, a delicacy with fresh lemonjuice and a pinch of salt.

I used to pick them open with my pocketknife and slurp them up with some saltwater (depending on the sea it's probably not the most sanitary way to consume them).

Not the answer you're looking for? Browse other questions tagged united-states animals sea animal-identification or ask your own question.

9
What types of trees are in these intertwined groups in Massachusetts?
12
What are these bulges? Are they harming the tree?
7
Did I save, or prolong the death throes, of the tuna crabs?
13
What are these strange insect nodules on my front porch?
12
What breed is this very large, black, turtle/tortoise found in the Northeast United States?
5
Where exactly is this rocky shoreline in the Downeast region of Maine, USA?
4
What is a lava tube, as a place to see bats? Are there any in the United States?
6
Help identifying mouse-like rodent in Willamette Valley (Oregon)
5
What is this plastic net with a wide middle and bottom that looks like an upside-down flower hanging from a tree?
21
What is this weird mechanical thing I found in the woods?