How can I find north from the stars without recognizable constellations?

If I am trying to find out which way is north at night, and I can see stars, but not the North Star or the Southern cross or other recognizable constellations, because the terrain is limiting my view, how can I do so?

What you will want to do is to find which way a star is moving. The way to do this, is to line up two objects pointing towards where the star is currently at, like so. 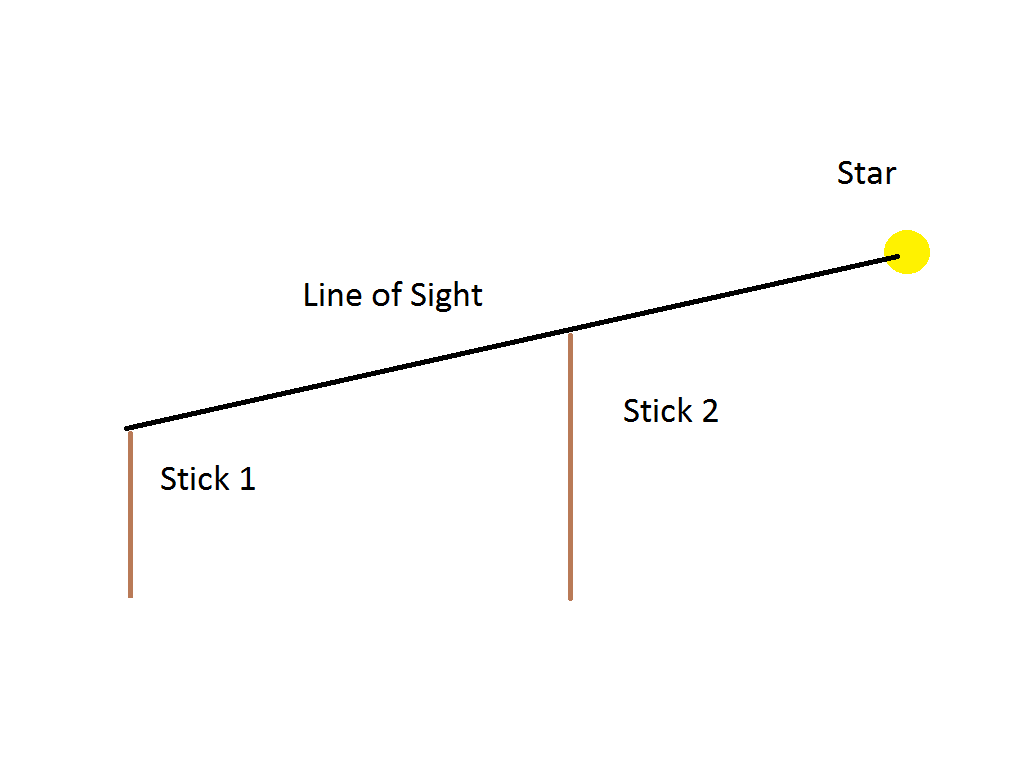 Then wait 15-20 minutes for the star to move and compare its new position to the old one marked by your sticks. 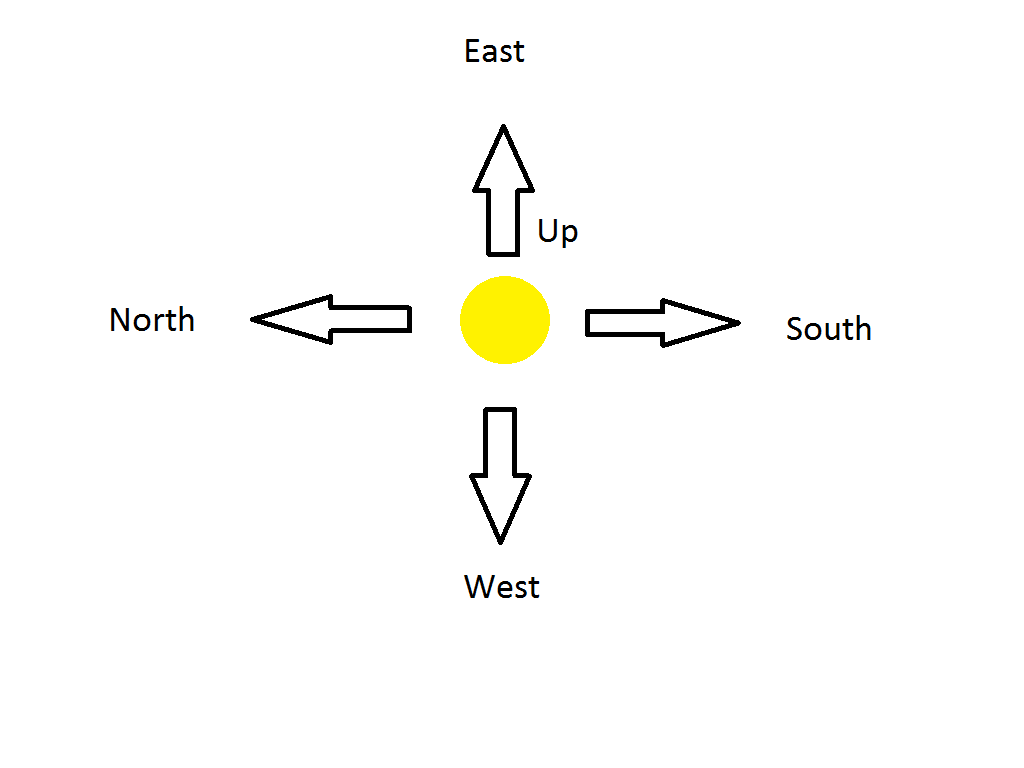 As illustrated above the correlation between its movement and the direction the line of sight is facing is,

If it didn't move at all, then congratulations, you have found the North Star.

This works better the closer you are to the equator, and doesn't work at all at the poles. Also, as pointed out by @Anton Sherwood, the stars underneath the pole star (between it and the horizon) will move the wrong way.

I like the idea of the iphone (or Android) time-lapse photography; that'll work even if you have no reception for your phone (download it before you go), but your GPS will work anywhere.

Failing that, the sticks idea is a nice construct. But you can do just as well by lying on your back and watching the sky for about 30 minutes, especially near the horizons. Where the stars are moving least is going to be near the pole. Pick a few bright guys in different spots to bird-dog, and see where they go.

Since you didn't limit the star(s) used, I'll give an example using the Sun. During the day, put a stick in the ground such that it casts a shadow. Mark the end of the shadow with another stick. Wait 15 minutes. The line from the original marked end of the shadow to current the end of shadow points due east.

If in the Southern Hemisphere the North Star is not available. Here is how to find your directions using the Southern Cross.

2 Identify the two stars that make up the long axis of the cross. These stars form a line which "points" to an imaginary point in the sky which is above the South Pole. Follow the imaginary line down from the two stars five times the distance between them.

3 Draw an imaginary line from this point to the ground, and try to identify a corresponding landmark to steer by. Since this is true south, true north is directly opposite it (behind you as you are looking at the point). 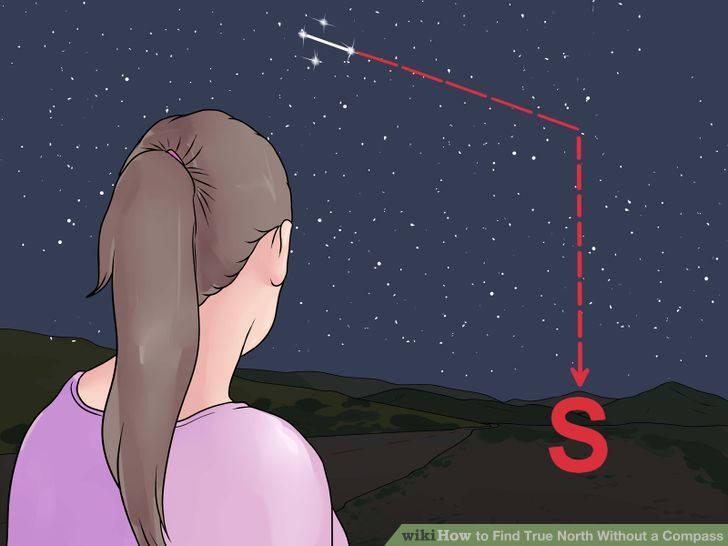 At the Equator one can use the Constellation of Orion.

1 The Orion Constellation is visible from both hemispheres depending on the time of the year. It is a permanent feature on the equator.

2 Look for Orion's Belt. Orion has several prominent stars. The 'belt' (3 stars in a row) runs from East to West. Look for that, it has a 'sword' attached to it.

3 Project a line From the sword through the middle star of the Belt. That is the general direction of North.

4 Orion lays across the Equator: the Belt rises & sets at east & West 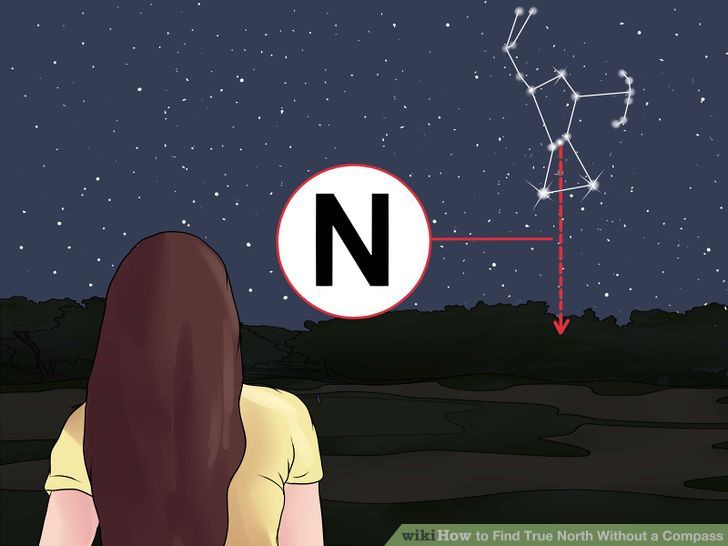 Under certain circumstances you can use moss to indicate north in the Northern Hemisphere.

If it’s overcast then look to nature, namely moss, to find north.

Moss can only thrive in damp conditions. Damp conditions often, though not exclusively, occur in shadowy areas. In northern hemisphere countries such as the UK the sun moves east to west but it always tracks this path in the south. In sum, north facing gets the least amount of sun and consequentially will be the dampest area. To make sure you are not being mislead, look for moss on vertical structures such as trees and other places where water doesn’t naturally collect. 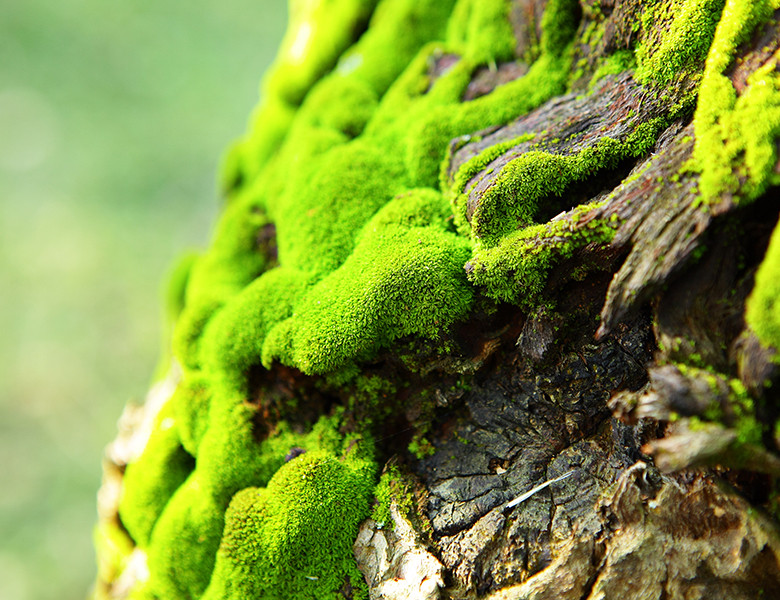 Best place to look for moss is near the base of large trees!

19
Are there any natural materials that can be used as a magnifying lens (or to craft one)?
22
How do you locate the "North Star"?
5
How would navigation be different while hiking at night?
3
Does the two sticks and a star method of finding north work the same way in both hemispheres?

13
Magnetic deviation at either pole
12
Is it generally allowed to walk in German forests in the night?
4
Learning to find north using moon phases
11
Can I use satellite images as hiking maps, how?
22
How do you locate the "North Star"?
12
Calculate true north with a compass and map
11
When is the best time of year to find the North Pole?
12
Are there types of compass other than the regular magnetic one and the gyrocompass?
3
Does the two sticks and a star method of finding north work the same way in both hemispheres?