What is a good source of vitamin C in the wild?

I know I could just carry a bottle, but scavenging is much more fun. What is a good source of vitamin C in the wild? Have spruce needles really got enough?

Pine needle tea is a good solution which is available year round in areas where pines grow. Do be careful to identify properly, and take care to not guzzle the stuff down... too much is bad for you. However this is the easiest to find and pine needle tea has a ton of vitamin C.

Dandelion greens are plentiful in many areas and good for vitamin C, though I detest the flavor.

Chicory is a decent source, though I find it to be too easy to misidentify.

All types of berries are your answer here! Pretty much any (edible) variety contains a large amount of vitamin C - blueberries, strawberries, raspberries, blackberries for instance. (Blackberries and raspberries seem to be especially prevalent at the right time of the year here in the UK.) And they're tasty too.

Of course, it goes without saying if you're not 100% sure what a plant is then don't risk eating it.

Let’s take a look at a few wild sources of vitamin C from plants available in my habitat (Southwestern Pennsylvania). For reference, the orange – at 100 grams – contains approximately 53 mg of vitamin C.

Looking at this list, it’s quite evident that vitamin C is ubiquitous in nature. And it’s not just found in plants. One can acquire vitamin C by consuming animals; the heart, liver, and adrenals are all good sources of vitamin C.

This list also hints at another important implication: our hunter and gatherer ancestors surely were ingesting vitamin C in levels greater than what is recommended today. After all, the average indigenous diet was far more diverse than the modern dietary amalgamation of corn, wheat, and soy; this traditional heterogeneity ensured that vitamin C was easily acquired. Additionally, research has shown that animal organs, rich in vitamin C, were favored over muscle meats in traditional diets. - Finding Vitamin C Outside The Grocery Store – Looking Into Wild Sources

The number one on the list is "rose hips" and this is my personal favorite due to its' history in Britain during World War II.

During World War II in Britain, the general public were encouraged to return to (or re-learn) the art of foraging in order to supplement or augment rationed foodstuffs. Most of the emphasis was on wild vegetation, there not being a great deal of wild game accessible to the ordinary person. The concept was not just tossed out to the population to follow-up as they saw fit, it was actively promoted and resourced by the government. The Ministry of Food published several leaflets on how to find and use the “Hedgerow Harvest” and County Herb Committees were set up to organize collections on a large scale. The latter was directed particularly towards wild foods with health benefits – many of the sources of fruit no longer being available – and also included foods for livestock feeding, such as horse-chestnuts (‘conkers.’)

One item singled out for particular attention was the rose-hip - a valuable source of vitamin C. The national diet was at some risk of shortage of Vitamin C due to the cessation of importation of fruit such as oranges during the war. The solution was to ask the public to collect rose hips from wild or cultivated bushes, the harvest then to be processed by commercial companies into syrup which could then be made available in the shops. The details and success of the campaign are eloquently told in two articles in The Times [London, England] in autumn of 1941, and mid-winter 1942. - The Rose Hip Collection Campaign (WW II).

At one time people could read articles on how rose hips saved the British during the World War II. It makes great tea and syrup! In fact, Recipes Past and Present has some fun recipes for ways to use rose hips, including written and video instructions. Much of it was taken from a Ministry of Food leaflet, Hedgerow Harvest, published in 1943. 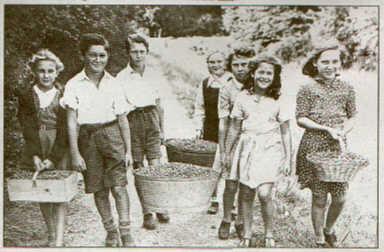 Scurvy Grass Sorrell has leaves rich in Vitamin C, and got its name from sailors travelling round Cape Horn who would eat the leaves to avoid scurvy.

It tastes pretty good, despite what the Wikipedia page says, but I'm not sure how widespread it is outside South America.

Not the answer you're looking for? Browse other questions tagged plants foraging nutrition or ask your own question.

9
What are the best resources for learning about foraging?
20
Are Rhododendron and Mountain Laurel truly toxic to burn in a campfire?
8
What is the most effective method to clean skin exposed to poison oak?
8
How do Plover sentinels give the “move out” signal?
6
What are good locations to find wild strawberries?
61
Can I safely eat grass?
6
What plants can be heard when they are growing?
5
Is there a backpacker's guide to edible plants that is very light?
3
Are there any toxic berries that can be easily confused with the Serviceberry (saskatoon berry)?