What breed is this very large, black, turtle/tortoise found in the Northeast United States?

My husband found this very large turtle (or tortoise) crossing a road from an industrial park towards a wooded area. It was in June, in Massachusetts, USA, at 8:00 in the evening. He didn't touch it, just walked alongside to make sure it crossed safely.

The prominent features are as follows:

I've heard that one difference between a turtle and a tortoise is that turtles fully immerse themselves in water, whereas tortoises spend most of their time on land, and drink at the edge without swimming. I'm not sure if that's true. My husband hasn't gone into those woods, so he doesn't know whether or not there's a pond or other body of water nearby.

What is the breed of this gorgeous creature? Is it a turtle or a tortoise? I'd also like to know some other things, such as approximate age; preferred diet; nesting habits; best place and time of year to see them; conservation status (some turtles in Massachusetts are protected or endangered); and any other interesting characteristics. 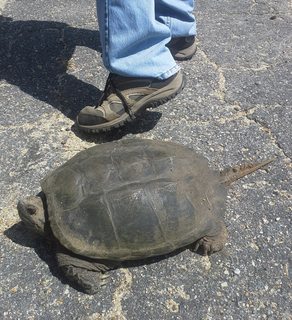 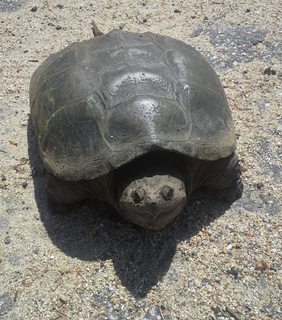 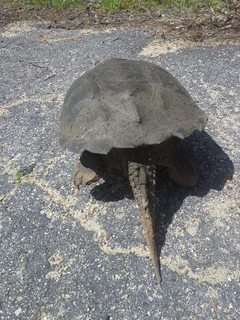 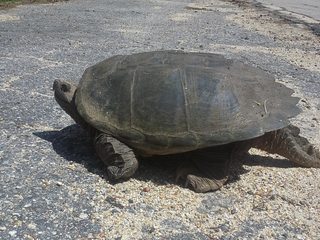 Based on this list of turtles in Massachusetts, and this one as well as the pointed nose and the jagged back shell, I am going to say that this is a common snapping turtle.

For more information I would suggest Wikipedia.

It a good thing that you husband didn't touch it, because they are capable of biting (link has gross picture).

This is a common snapping turtle. It's not a tortoise. The biggest difference is that turtles are aquatic, spending most of their time in the water, while tortoises live on land.

As for your other questions:

Age:
It's not easy to tell the age of the snapper. They reach full size between 8 and 10 years old. Adults measure from 9.5 to 14.5 inches (24 to 36 cm), with many growing much larger. Healthy snappers live an average of 40-60 years, sometimes longer. By that criteria, the one in your pictures looks fully grown, and is probably somewhere between 10 and 60!

Diet:
Snappers are omnivores. About two-thirds of their diet is plant-based, including all aquatic vegetation. They also eat insects, spiders, worms, fish, frogs, grubs, smaller breeds of turtles. When bigger they eat snakes, birds, and small mammals. They're pretty sedentary, grabbing what comes by rather than hunting.

Nesting habits:
Size, rather than age, determines maturity. Breeding begins at about 8 inches long, usually about 6 years old. They nest between April and November. They mate in the water, then the female travels many days and more than a mile, without stopping for water, to make the nest. (Interestingly, fertilization can take place up to two years before she lays the eggs!) Nests are built on land, in loose, sandy soil, on hills, in full sun. She lays a "clutch" of 20-50 eggs, covers them, and makes the long journey home. If she likes the nesting spot, she'll use it for many years. It's called "nest site fidelity."

Eggs incubate two to four months, depending mostly on the weather. Sadly, very few snapper births are successful, some sources estimate as low as 1 in 100, thus the need for the large clutch. Birds and animals eat most of the eggs. Of those that survive, few hatchlings make it to adulthood. However, large snappers have very few animal predators. Their primary predators are humans, so if they can steer clear of us, they can live a long time!

Best place and time to see them:
In the spring and the fall, the female is seen during the day, traveling to and from nesting areas. Unfortunately, those sightings are usually in the road, where they risk "death-by-car"! They're hard to spot in their murky waters, but they're nocturnal, and eat after dark and early in the morning, so that's the best time to see them. Even then, they stay underwater much of the time, with just their neck and head sticking up, so look for eyes or a moving head. Tread lightly. If scared they'll go under water and swim quickly away.

Conservation status:
In most areas where snappers are abundant, they're not classified as "endangered." In Massachusetts they're "protected." It's illegal to hunt, capture, or remove one from its habitat. Handling is illegal too, and subject to fines, although sometimes people will do so to help them cross the road. Picking them up incorrectly is extremely dangerous to them and should always be avoided unless there's really no other choice. Special handling permits are given to certified wildlife rescuers, rehabilitators, and treatment centers. Even after dying, they're an important part of the eco-system. Removing dead body parts, including just the shells, are subject to a fine, as high as $500.00. In Massachusetts, the penalty for breeding and sales is as high as $2,000.00 (They're legal to have as pets in some states, but not in Massachusetts.)

Not the answer you're looking for? Browse other questions tagged united-states animals animal-identification turtles tortoises or ask your own question.

31
How would you help a snapping turtle cross the road?