How do you tap a tree for sap?

Related to this quetsion Tree tapping in the UK - Time and legalities. I have never tapped a tree.

How do you do this? What equipment is involved, etc?

Sugar Maple trees are by far the most popular trees that people tap for sap. So I will use this as my example of how to tap a tree. The following is taken from: Common Sense Homesteading.

Identify Maple Trees and Wait for the Right Temperature Range.

There are many species of maple trees. The sap gathered from all of them can be boiled down into syrup. Read more about Maple Tree Identification.

Most syrup is produced in the northern states, but can be made as far south as Tennessee. The temperature must drop below freezing at night and rise above during the day for the sap to run. Trees should have at least a twelve inch diameter before being tapped. When the maple trees start budding, sugaring is over, as the sap produces bitter syrup.

Traditional maple syrup making equipment includes sap spouts, buckets, and covers; which are available in hardware stores, from maple sugaring equipment suppliers, or used from other sugarmakers. To tap the trees you will need a drill and bit, and a hammer. The minimum that a backyard sugarmaker must do is to drill the taphole and tap in the spout.

To collect the sap: Milk jugs or even plastic bags can be hung on the spout; or plastic, food-grade tubing can be connected to the spout and the sap run into a bucket or collecting tank on the ground. 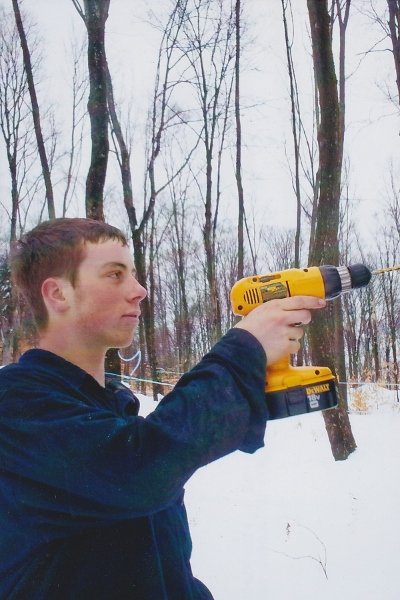 Tap the trees in the early spring, as daytime temperatures rise above freezing. Drill a hole the size of your spout, at a slight incline. (Note angle above.) Tap the spout into the hole firmly, hang the bucket, and put the cover on to keep out rain and bugs. This is the magic moment, as the first drop of clear, sweet sap runs off the spout – often onto an eagerly waiting tongue!

Sap is perishable, and should be gathered and boiled daily, or kept cold in a storage container until boiling. Filter the sap to remove any impurities.

For more Information on this subject please see the following site: How to Make Maple Syrup

There are a few ways to tap a tree, before you tap you need to know when the sap is rising from the roots to the branches.

I have read about

The blade/drill should only penetrate to the layer where the bark meets the inner wood as this is where the sap is being transported.

There is also talk of using muslin cloth to filter before going into your container but that seems to be a small minority of people.

After you have collected the sap you want, bearing in mind not to take too much that you cause damage to the tree. You then remove your twig/tap from the tree and press the bark back down to form a seal. A lot of people suggest that the use of local cordage (ivy, brambles, etc) to hold it in place is a good idea as the pressure from the sap may force the bark open again.

Previous advice included blocking the hole or covering with mud, however, this is now thought to introduce foreign material to the tree causing it further damage. The tree cut should be closed with it's own bark and then the bark should be left exposed to the air.

5
Is it practical to tap a tree for syrup on an overnight stop?
8
Tree tapping in the UK - Time and legalities

17
Is there a consensus or ethic for rappelling off a tree?
22
How to attach signs to trees considering tree growth?
8
How can I ascertain the proper harvesting/extraction period for birch syrup for a particular region?
5
Is it practical to tap a tree for syrup on an overnight stop?
14
How to assess the likelihood of a tree falling in a forest?
5
How exactly do you cut down a tree with fire?
6
How can I identify Woolly Adelgid on a Hemlock tree?
8
What causes a tree to split into multiple trunks?
6
How does a tree with such an extreme curvature form?