Is amine blush only a concern with new/ongoing epoxy repairs?

While researching my answer at In a boat repair, what would cause Gelcoat not to harden? I learned about amine blush. Amine blush is a waxy layer that forms as most marine epoxies cure. It can be clearly visible as a white layer, or nearly invisable. It is water soluble, sanding and/or acetone wash without soap and water washing only spread the amine, creating problems with adhesion and curing with additional repairs.

Per the answer to How can I prevent a fiberglass crack in my sailboat from getting worse? there are two types of resin used in boat construction and repair 'polyester' & 'epoxy'

I washed my boat with soap and water a couple of weeks before beginning repairs. I have identified that is about a 1972 model made with polyester resin. It has had some older repairs (epoxy vs polyester not yet identified as old repair product) I have made patches with polyester resin and new fiberglass. So far I have only used acetone and sandpaper in my preparations.

Do I need to be concerned about amine blush, or is that only related to new/current repairs with epoxy products in areas where humidity is not well controlled during curing?

Amine blush is something you will have to deal only on new repair. In old and exposed repairs the blushing would likely be long gone. Basically amine blush is salts of amine carbonate, they will combine with CO2 and air moisture to form hydrates of amine carbonate. They are a result of the curing process and the hardener is largely responsible of this, in fact you can have hardeners that wont blush and some that will (for example West System 207 vs West System 206) paired with the same resin. It looks like a white-ish smudge and given enough time it becomes sort of powdery. Depending on the formulations you can have epoxies that will blush and some that wont (non-blushing... they all will blush to a certain extent but in some you simply dont have to worry about it, I worked with some brands that left nothing at all, however rinsing cured laminations before recoating becomes an habit when you are used to work with different epoxies)

The chemistry itself, shape of the amine and how they relate to different formulations and strength of the final product isn't something you want to care about as what is available to a backyard builder ends falling all within the same performance envelope that pretty much exceeds the requirements of our applications (things would be different if you were to repair an airplane).

In the picture you can see a set of test panels with different epoxies, the one in the bottom left shows some bad blushing 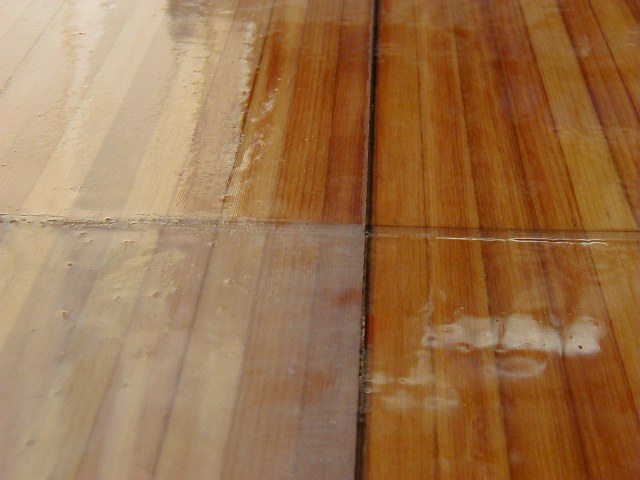 The problem is that they are surface contamination that will prevent proper adhesion of following coats of resin (to fill the weave of the cloth for example) or varnish/paint coatings. That is dealt with by letting the resin cure then simply washing and scrubbing away the amine (warm water with mild soap and scotchbrite type pads) and rinsing. Wet sanding also removes the amine provided the surface is rinsed well during and after the sanding. Other ways to eliminate them are more typical of industrial processes rather than what one does at home. Dry sanding is not suggested as will end pushing the amine inside the sandpaper scratches making them very difficult to remove even with a wash. Using solvents on resins as cleaners is never a good idea due to the possibility that contaminants are left by the solvents themselves, that the solvent wont eliminate contaminants already present on the surface and that they will reduce the performance properties of the resin.

Another method to deal with the amine on several recoatings is to apply the following coats before cure "wet-on-wet", so the the amine will end only on the final layer, and this can include brushing the gelcoat.

This is very different from the other kind of wax that shows off in polyester resins. Since this kind of resin has difficulty curing in the presence of air a bit of paraffin wax is dissolved in the resin formulation. This wax rises to the surface during the curing process and forms a thin film that separates the resin from the air allowing it to cure hard. Polyester resins are non air-inhibited (they have wax in) or air-inhibited (they dont have wax). The polyester resins without wax are used for layup schedules that have different layers applied at different times as they wont cure completely (without the wax the air inhibits the curing process) thus permitting chemical bonds with the following layers, they are laminating resins and the final lamination with waxed resin or gelcoat will seal them permitting full cure. The polyester resins with wax instead are used for single laminations, final laminations, or pieces that will need to be sanded (cleaning off the wax then sanding and cleaning allows for mechanical adhesion of following coats). Applying a following coat over uncured resin method (hotcoating) comes from the polyester resins: due to price in the past they were the main resin people worked with and many of the techniques have been ported to epoxies now that they are more affordable, not because the two resins work in the same way but because of work habits and often there are different advantages (i.e. wet-on-wet permits the hotcoating of polyesters where the wax can be pushed up across the layers and still have chemical adhesion and in epoxies permits chemical bonding and saves the time of washing the cured layer but mostly saves the need for sanding)

So, for different reasons and different substances, both polyester and epoxy resins need a bit of care when multiple laminations are applied one above the other. You will find that epoxies are a lot easier to work with than polyesters.

In practice the problem you are facing is not the amine, which is easily taken care of and patches are laminated in one single shot most of the times. Rather your doubts of possibility of failed adhesion is the fact that you have previous repairs made with who-knows-what. Remember that, waxes and amines aside, while epoxy adheres rather well on polyester resins, polyesters have lousy adhesion on epoxy resin and should not be used on top of it otherwise you risk to have delamination overtime. Commercially you can more or less tell the kind of resin used even looking at the cloth (mat for example is used only with polyesters, its fibres are prepped for that resin), but when you are talking about backyard repairs that could have been made using all sort of material at hand you can never tell, so you will be limited to epoxies as they will stick to almost anything already there.

Humidity isnt a big problem for the resin itself, but clear epoxies in applications where you are looking for it to be completely transparent, can fog up if laminated in high humidity days. (Epoxies specifically formulated for clear laminations show little to no blushing but they will fog if someone scared by what they hear about amines tries to wash before they are completely cured, and often people dont realize that, depending on hardener used and temperatures, it can take weeks)

On old resin surface preparation involves a good sanding with rough sandpaper to obtain a mechanical bond, chemical bonds are not possible anymore and using acetone to soften the existing surface only compromises the strength of that resin. Sanding that way there wont be anything on the surface of an old repair to be re-finished with gelcoat. If possible, repairing close to or over old patches, try to eliminate completely the old patch and re-do the whole.

For very big patches might be necessary to take a mould of the section, prepare the piece on that and once cured cut off the area on the boat and replace it.

If you need to shape the outside of a patch to reduce the final sanding epoxy wont adhere to packing tape or saran wrap but still cure under them. With epoxies acetone is pretty much used for cleaning only, duty that can be easily accomplished with simple vinegar. Metal tools like rollers to eliminate air etc are not used with epoxies and a good 90% of the tools needed are single use (measuring cups, spatulas, mixing sticks... all can be found between regular items much cheaper than the dedicated paint store versions)

6
How can I prevent a fiberglass crack in my sailboat from getting worse?
9
How to get the best results when applying gelcoat with a brush?
6
In a boat repair, what would cause Gelcoat not to harden?

9
How do I reseal a tent bottom with many pinprick holes
7
Anti-theft tracking device: how to configure it to deal with the battery?
6
In a boat repair, what would cause Gelcoat not to harden?
9
How to get the best results when applying gelcoat with a brush?
7
What type of glue is best to repair/resole cross country ski boots with plastic soles?
8
Can I sleep in my canoe with it adrift on a commonly used lake?
4
In a river with light traffic, while swimming its length, how to be better seen by boats?
6
Repairs for severely damaged EPS/epoxy stand-up paddle board