How do you safely ascend and descend the Half Dome cable route?

The easiest way up Half Dome is the cable route (rated Class 3), which looks like this. 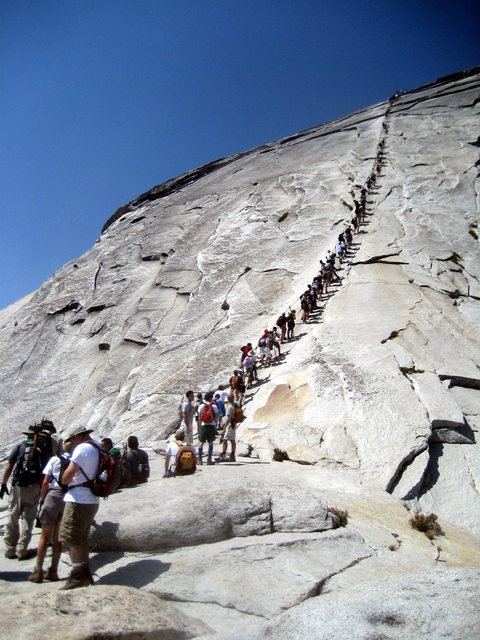 As six people have died on this route since it was put in place, and it looks really steep and scary, how can I ascend it safely?

How do you do it safely? It is safe. Just do it. Those six deaths were over 100 years. Recently there are as many as 50,000 people doing that route per year. Even if those six deaths were all in the last year, that's only a 0.012% death rate. But those weren't all in one year. The real risk is between one and two orders of magnitude less than that. You are more likely to be struck by lightning.

Realize that all activities carry a risk. Accept that and move on.

First off, don't even think of attempting this if it's raining or thunderstorms are nearby. Not only will water make the rock slick, but the prominence and the metal cables make people on the route prime targets for lighting strikes.

You are going to want to wear grippy shoes because of the slick granite, and gloves to protect your hands.

What you are going to want to do to prevent a catastrophic fall is to clip yourself in to the cables. The minimum equipment for that is a rock climbing harness and a via ferrata setup. A rock climbing helmet would also be a good idea. The carabiners will need to be regular sized (not mini).

As you go up the cables, you will have one carabiner connected to the cable at all times. When you get to a post, clip the other carabiner onto the cable on the other side of the post, before removing the first. Like this. 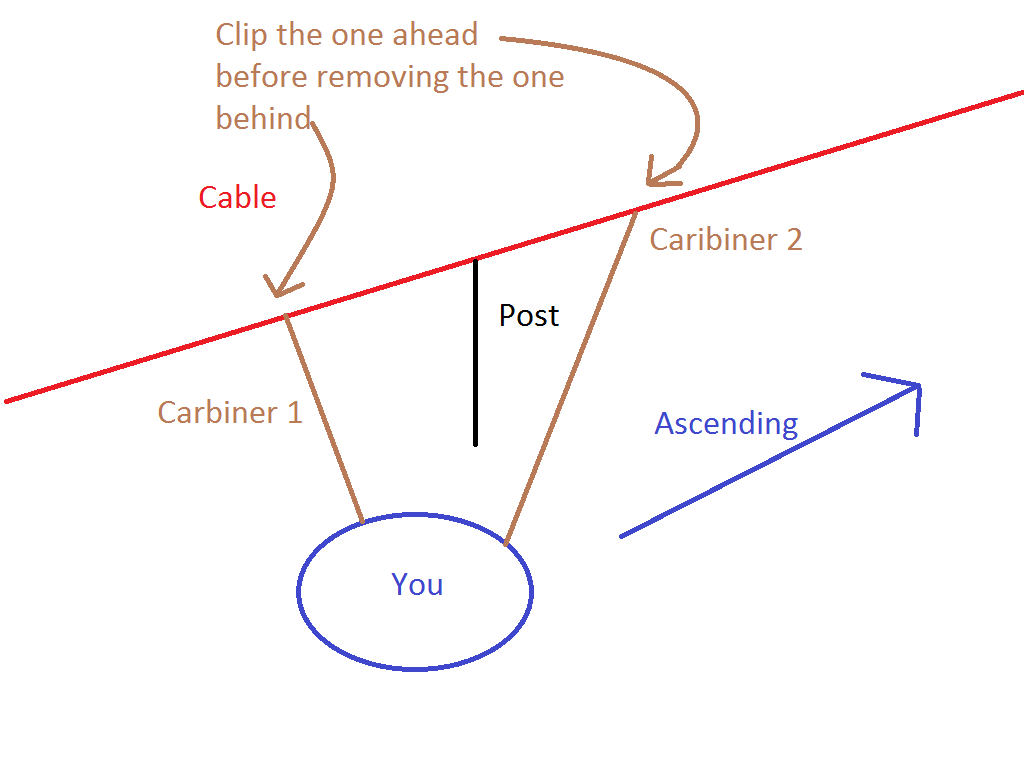 If you were to fall, the carabiner would slide until it caught on the post.

With that said, you DO NOT want to fall, because of the risk of hitting someone else and knocking them down, potentially causing them to fall. The odds are very few people are going to be clipped in.

Also, there is traffic going up and down at the same time, so be mindful for other people.

Making certain that you water bottles are secured inside your pack so that they can't fall out and hit someone else is also a good idea.

Getting an early start will give you more time and allow you to take it slowly.

Finally, permits are required, so definitely plan ahead and get one, as the penalty for not having one is rather steep.

13
Walking through a Thigh-high snow
11
"Tag line"/"pull cord" for multipitch trad: what kind and when needed?
28
What to do if the second seems stuck and absolutely no communication is possible?
18
How safe is a chest harness when used without a sit harness?
25
Reacting to a bee attack
4
How to safely descend a slope in high winds?
30
What to do if you are above timberline and your descent is cut off by a large forest fire?
11
How do you protect yourself against crocodiles when you have no option but to camp on the banks of a croc-infested river?
9
Would top-roping in this limestone quarry be reasonable?