What are strategies for successful baking on the trail where wood fires are not allowed? I am particularly interested in

For pizza, I do it in a frying pan with cornmeal under it to keep it from sticking. A lid helps a little. For corn bread, I make "corn pone", again in the frying pan. You didn't mention regular bread, but I make English muffins, again the frying pan. These all work spectacularly well - the taste and flavor and just what you want and there's no sense of "if only we could have baked" at all.

One of my camping companions loves to make "scrambled brownies" which might work in the cookie category. You make up brownie mix (she uses a just-add-water box) and then cook it in a frying pan stirring a lot as though it was scrambled eggs. I can report the result tastes like brownies and is nice in the middle of a trip when food is getting a bit boring.

For pies, you're going to have to actually bake, and while I don't do that, there are plenty of people who do. You can get special lightweight lidded pots, heat reflectors and suchlike. Me, I wait and have pie when I get home.

You get one of those and you can bake anything you want. I've used before and it's awesome.

Edit --- Just updated with a link to MEC website. They seem to have it in stock

Below is how it works. 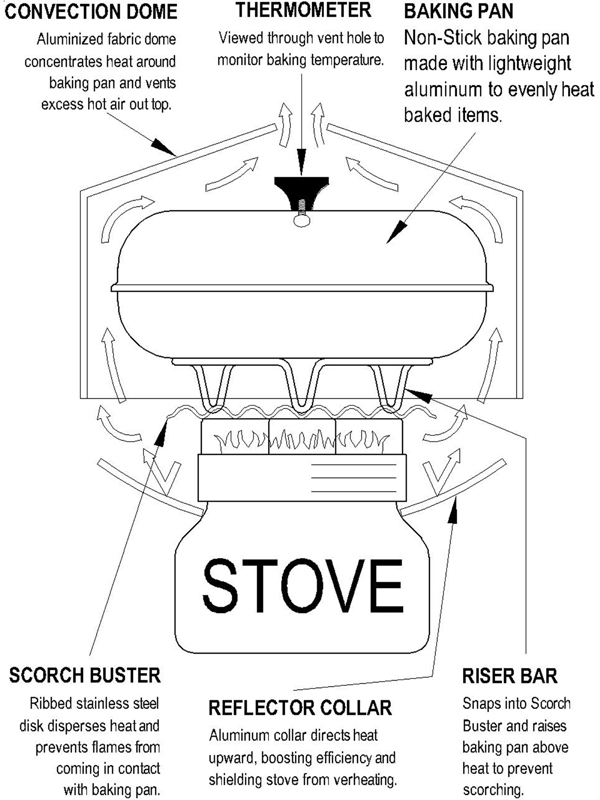 If you don't mind packing the extra weight (you didn't say that you were backpacking), bring along a cast iron dutch oven. You can do all those things and more. Their utility is matched only by their weight.

If you really want baked-ish food on the trail with a stove then thin foods like pancakes and flatbread are your best bet as these can be cooked in a shallow pan fairly quickly, although when fuel is at a premium these will never be as efficient as boiling or re-hydrating foods like cous-cous, pre-cooked rice or per-packaged stews etc.

Bear in mind also that pre-coked cookies, flatbread ect will last for a good few days so you don't need to cook them fresh every day indeed packaged flatbread can last for weeks.

You can get reasonably lightweight camping ovens and it is certainly not impossible to improvise one from natural materials at your campsite but fuel is the real problem.

You can do it, but you have to lug around a lot of stuff to do it. Perhaps, you can take advantage of what is already around you? By this I mean build your oven, and take only your stove with you. It'll take some practice and know-how to pull it off. But once you figure out how to build a pizza oven with a cardboard box and aluminum foil, it's not hard to come up with your own ideas.

So a idea comes to mind, which I borrow from the book "shelters, shacks, and shanties", by none other than D.C. Beard, you might make your own oven out of rocks and boughs you find along the trail. I wouldn't advise yanking branches from trees, as recommended by Beard, that's not very PC these days.

You'll want to build a fireplace log-cabin style. That is: lay two sticks in parallel, about 2' apart; then lay two more sticks perpendicular to the first to; and keep on alternating until you get about 3' high.

Now, since you indicated a need to use the backpacker's stove, what you'll want to do is build a flat course, maybe 12" high, so that the stove can comfortably sit underneath. So lay as many sticks as can sit side-by-side for this layer. The sticks should be sparse on one end, to allow heat to come through it. After the first course, you have a sort of flat area to lay your food onto it, you continue to build up; but now you have to cover the sides to keep heat in. Here's where the boughs come in; perhaps you can use wet leaves, or bunched up vines. Or maybe you have aluminum foil. Of course, the top of the fireplace also needs to be solid just as the first course.

So what you are now left with is a raised log-cabin style fireplace, with the backpacker's stove at the bottom and completely visible. You need this on the outer part of the oven, or else you could have a fire hazard where the fuel bakes with the food. If anything, you at least need good air flow, or some fuels will refuse to burn, such as those which are weak at high altitudes (butane and propane, for example.)

You'll need an opening; you might fashion one side of the log cabin to do this; you just need to be creative with having a 4th open side which allows to support the two sides. Maybe some sticks or Y branches can help here.

The downside to this is that you rely on mother nature to provide your materials. We all know how cooperative mother nature can be...

Another idea is to bring a collapsible cardboard box, and some aluminum foil. As you begin to prepare, cover the interior of the box with foil. Make a hole in the floor of the box, that's where the heat will come in; then suspend the box about 12" off the ground - just like in the first course of the log-cabin stick method I mentioned.

The downside to this method is that you have to carry the box with you. Could be cumbersome, if not heavy.

Another idea is to build yourself an aluminum box that can collapse. Otherwise, it is constructed the same way as the cardboard box, with a hole at the bottom.

The downside to this is the amount of preparation you'll have to do ahead of time. However, there are tons of plans to make something like this on the internet.

Another idea is to use two frying pans, one placed atop and upside down over the other. The downside to this is the pans can be cumbersome. And you'll need rather large pans to pull off a meal.

You didn't specify fuel you'll be using. I do NOT recommend using white gas or any liquid fuel (especially kerosene or gasoline) as all of them give off an bad odor which will be picked up on your food.

Also, if your oven is small, you run the risk of setting the whole thing on fire. What you could do is boil water as you bake. The steam given off would help prevent that. Also, soak all of the wood in water before using. And for the walls, use green leaves or rocks.

Not the answer you're looking for? Browse other questions tagged backpacking cooking or ask your own question.

9
Recipe for baking bread/cake on the trail

7
What brands make propane lanterns, stoves, heaters, and accessories in America?
9
Which types of wood will make food taste bad?
15
What are some good gluten-free foods for backpacking?
6
What's a good back-up wood and alcohol stove?
21
How to cook meat with no equipment?
16
What are the Pros and Cons of No-Cook Backpacking?
10
Protein-intake on extended minimal-weight treks
7
Tips for Cooking with Unseasoned (green) Firewood
15
How can I backpack further without resupplying?
10
Yosemite Fire Rings - What to Expect?