How dangerous are kangaroos?

After watching this video of a man punching a kangaroo to rescue his dog, I am wondering how dangerous a kangaroo is to a human on foot? I am sure that there are a lot of other things in Australia that are dangerous as well, but are kangaroos something that a person would need to worry about?

Generally speaking wildlife should not be harassed by humans, but left alone. Bites can infect you with unwanted bacteria and require stitches in a hospital.

Large animals should always be left alone because they could be possibly cause people harm. Amongst this group are kangaroos which are to be considered a real possible danger to people, especially if cornered or somehow feel threatened.

Their hind legs can disembowel opponents such as other kangaroos or other animals so they should be considered dangerous to people on foot, especially if they are approaching the animal too closely or scare it by accident.

People should not approach kangaroos on foot but stay away from them as for the same of other large wildlife.

Male kangaroos "box", either in play, when asserting their dominance or in serious competition over females. The punching of the front legs is pretty harmless, but the powerful hind legs with their long sharp toenails are a dangerous weapon. Kangaroos can disembowel opponents, be it other kangaroos or predators like dogs.- Kangaroo Facts

Kangaroos can be very dangerous to men. It's never a good idea to approach them and we should always exercise caution when in the vicinity.

However, they don't go looking for people to attack. They're herbivores, meaning they only eat vegetation, so even if they kill a person, they don't eat it. They have very little incentive to start a fight with a human, and are most aggressive under two conditions:

As I said, we should always give a kangaroo as much space as possible. However, if you're already fairly close when you come upon it, there are things you should do to avoid being hurt.

Kangaroos can be big (largest confirmed stood 2.1 m (6'10") tall and weighed 91 kg (201 lb)!), they're strong, they have killer claws that they will use to try and gouge the eyes out of opponents, and an even larger claw on the end of their powerful feet that can easily disembowel someone with a kick.

When kangaroos fight, they will support themselves on their tails and kick with both feet. You do not want to be on the receiving end of a kick from an animal that can run up to 70km/h. Especially if that animals foot looks more like spear than a foot. 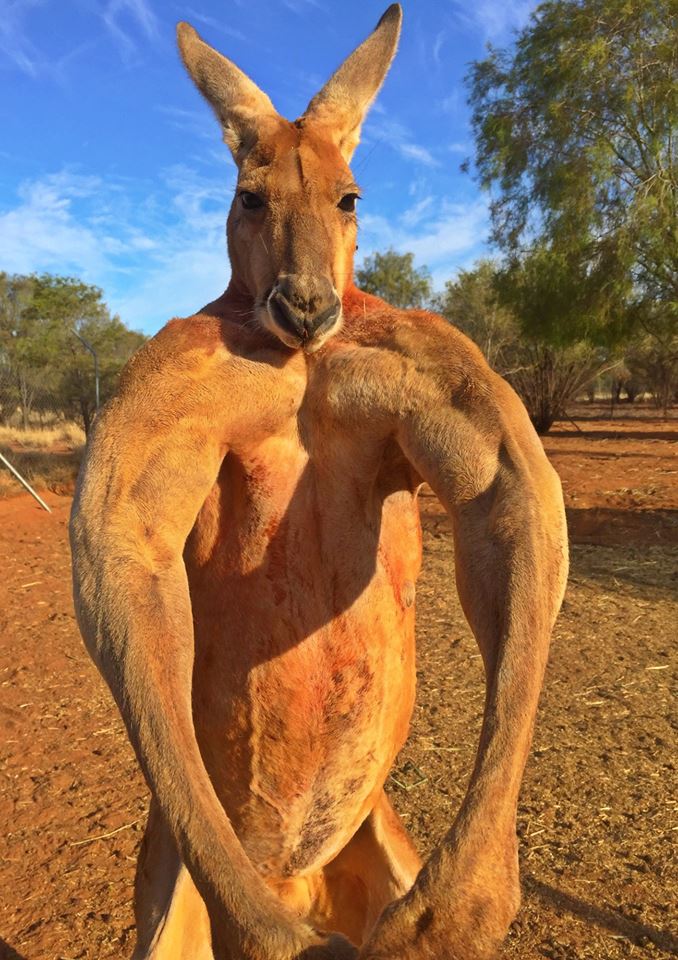 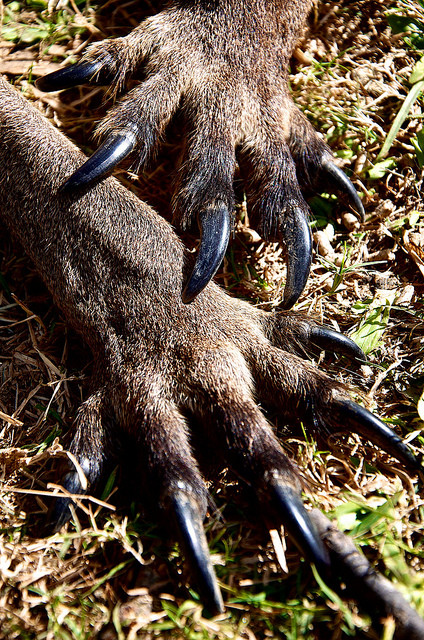 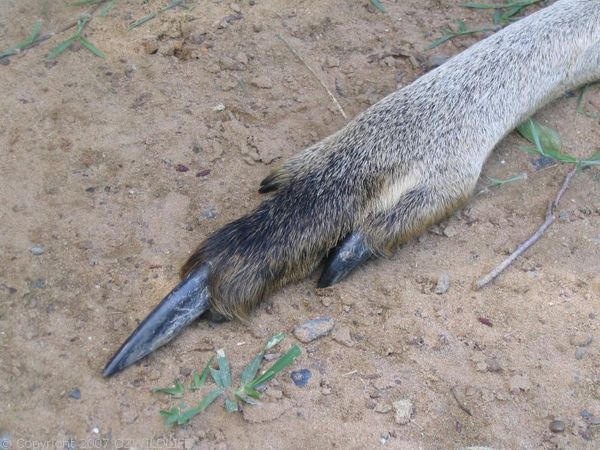 For the most part they are a pretty docile creature, and will typically leave you alone, and won't attack unless they feel threatened.

In the wild, kangaroos are hunted by dingos, witch don't look much different than a typical pet dog. The kangaroo in the video obviously felt threatened, and thought the dog was on the hunt (which it was, but for something else) so the Kangaroo was acting defensively. The man in the video risked his own life to try and save his dog, the punch probably wasn't planned, but the kangaroo was lining up for a fight with another biped, one kick and that guy could have been dead, fortunately for him, the punch confused the kangaroo long enough for him and his dog to get away. The kangaroo got the memo that neither animal wanted a fight, so he took off in the other direction.

Kangaroo attacks are rare, only a small handful result in injury each year, compared to the thousands of other annual animal attacks in Australia.

The best thing you can do around a kangaroo is treat it like any other wild animal, never approach them, keep your distance, and let them know you're there long before you get too close. Also bear in mind that Kangaroos are one of the fasted land animals on the planet, they can easily cover 25ft (8m) in a single leap. So perhaps stand a bit further back than what you might initially think is a safe distance.

Having grown up on a farm in Western Australia which is inhabited with kangaroos I have never thought of kangaroos as a danger to humans.

In my experience kangaroos are afraid of humans (unless raised as a pet - yes we had a pet kangaroo as a kid).

In saying that there does seem to be a number of reports of kangaroo attacks on the web. Many of these involve dogs. It looks like there has only ever been one recorded death in 1936.

Additionally, Male kangaroos or "boomers" are known to fight, however this is usually only amongst themselves.

They are also probably less of a risk in farm areas where they are often culled and hence more afraid of humans - An open season has existed for landholders to shoot (most) kangaroos in most areas of WA since 1988.

I believe the biggest treat to people from a kangaroo is having them jump onto the road while driving and people swerving to avoid them and rolling the car over/hitting a tree etc.

So in light of the above my advice is:

Otherwise (personally) I've never had an issue approaching a kangaroo/being around them.

Maloo is correct. I am Australian too. The only precaution we have in rural Victoria is stay away from:

A lone kangaroo that does not move away, or approaches.

if you find one, watch constantly and move away.

I never heard of anyone in our community getting attacked.

Extra rules apply if you have a dog.

These other posts warning humans about kangaroos are absolutely correct. I would say a similar risky animal would be people might be familiar with is bears, most of the time they probably keep to themselves but when threatened they will fight and they will win probably fatally injuring you. But another danger that has not been mentioned is coming across a kangaroo in the water. Do not approach or swim with it. Do not let your pets chase after them in water. They will use their tail to balance then use their legs to keep you under the water, drowning you. Granted this is mostly with other animals not humans but there is a risk.

If you have to absolutely get up and close to a kangaroo go to a animal park/zoo where the animals are bred to be calmer around humans or look for wallaroos or wallabies. These are basically mini kangaroos.

The farmer in that video seems extreme but it was reasonable. He shocked it to stop it from killing his dog, got the dog and left before the kangaroo could kill him or his dog. Not the best strategy but better a surprised kangaroo rather then a dead dog or farmer.

Not the answer you're looking for? Browse other questions tagged safety animals australia or ask your own question.

6
How can I maximise my chances of seeing a wild wombat?
9
What are the dangerous animals in Southern Nevada
6
How dangerous are wild horses?
9
How to avoid dangerous encounters with hippopotamuses?
6
The dangers of simul-rappelling
12
Relative risks of various outdoor activities?
8
How can we be the most respectful to a moose when photographing it up close?
4
How can I tell if there's a camouflaged octopus in a coral reef, so I can keep from disturbing it?