How to get the best results when applying gelcoat with a brush?

I just finished applying gelcoat to my boat. Results were less than wonderful.

I have some experience, with bondo, fiberglass and painting, so it did not seem like it should be to difficult to get reasonably good results. Still I did a lot of research online before choosing a product and beginning the operation. I choose 'TotalBoat White Gelcoat' as the most promising product, I found the most negative review of the product and researched what the best methods for not repeating their experience (see: In a boat repair, what would cause Gelcoat not to harden?)

I prepped the boat, sanding, patching cracks (fiberglass), filling (bondao), sanding and finishing up with a acetone wash, before starting to apply the gelcoat in a heated, vented, humidity controlled garage. 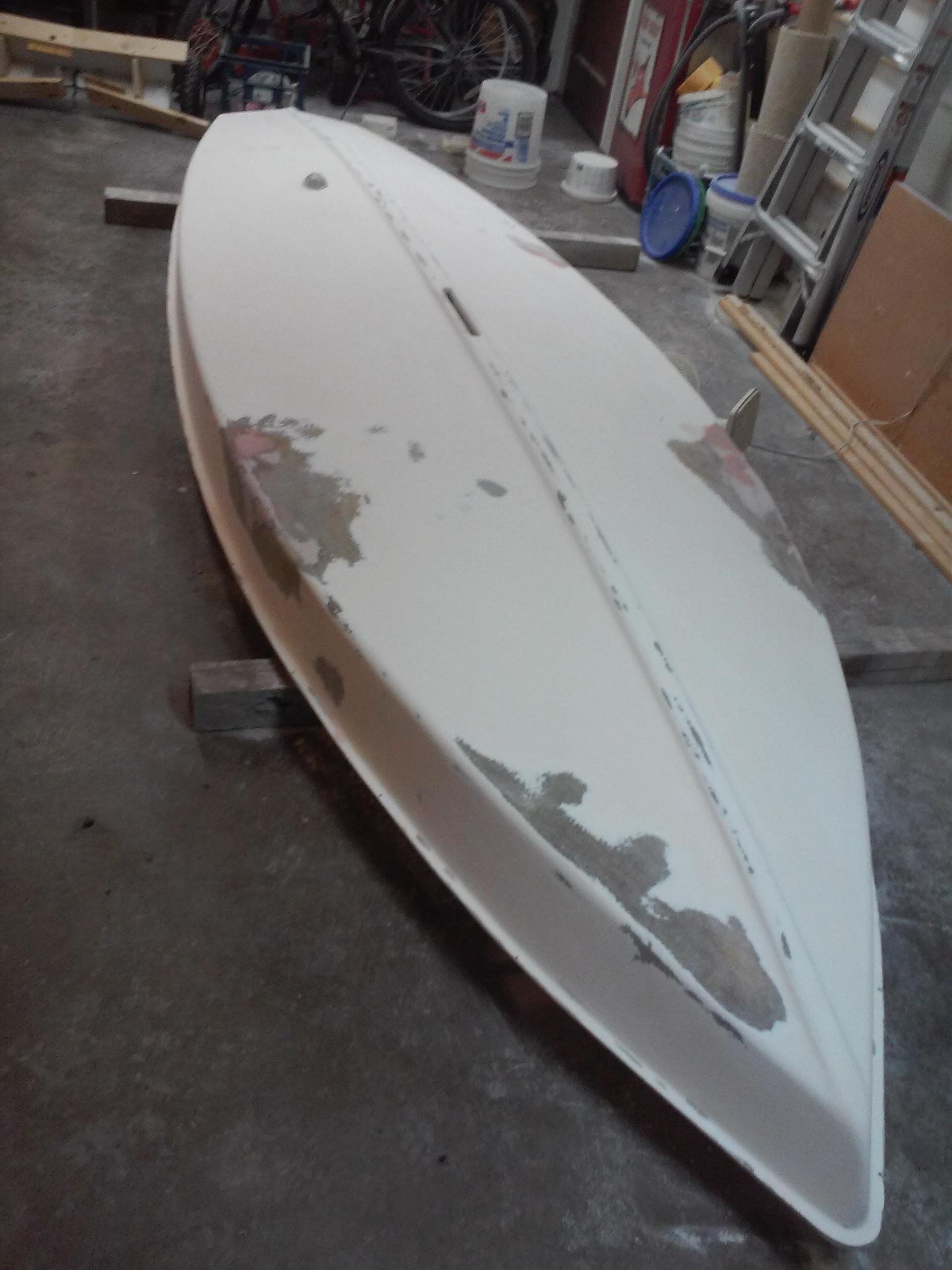 Doing the math it came out that one quart of gelcoat would be a bit more then one coat on my 14 foot sunfish hull. Experience with rolling paint and quick setup time once harder is added, drove me to choose a brush. I was worried about the amount of product the roller would absorb combined with curing quicker then I could full apply one coat. I choose to use a brush mixing and applying gelcoat in 4 ounce batches. While the product did not give directions for mixing less then quart size batches, multiple online reference indicated 7 to 12 drops per ounce at 70 degrees F gave good results.

I purchased two quarts of TotalBoat White Gelcoat, one without wax for the first coat(s) and one with wax for the top coat. I mixed and applied a first coat just to the areas where I had sanded to bare fiberglass, I used paint strokes fore to aft. Because I had purchased relatively cheap brushes, there was some issue with loosing bristles in the gelcoat and having to pluck them out (Next time buy better brushes!) About 8 hours later it had dried nicely with a light tack as unwaxed gelcoat should. I mixed and applied a second coat to the entire hull (6 small batches), using port to starboard strokes. I let it cure overnight and the next morning it was perfect.

First thing in the morning, I began mixing and applying the waxed gelcoat as the final coat, fore to aft stokes. At 7 drops to the ounce I had only used about half of the catalyst from the first quart, so I continued using the same catalyst with the second quart. Really Really need to spend more then a dollar per brush next time! You throw them away at the end, but all those loose bristles are a major pain. 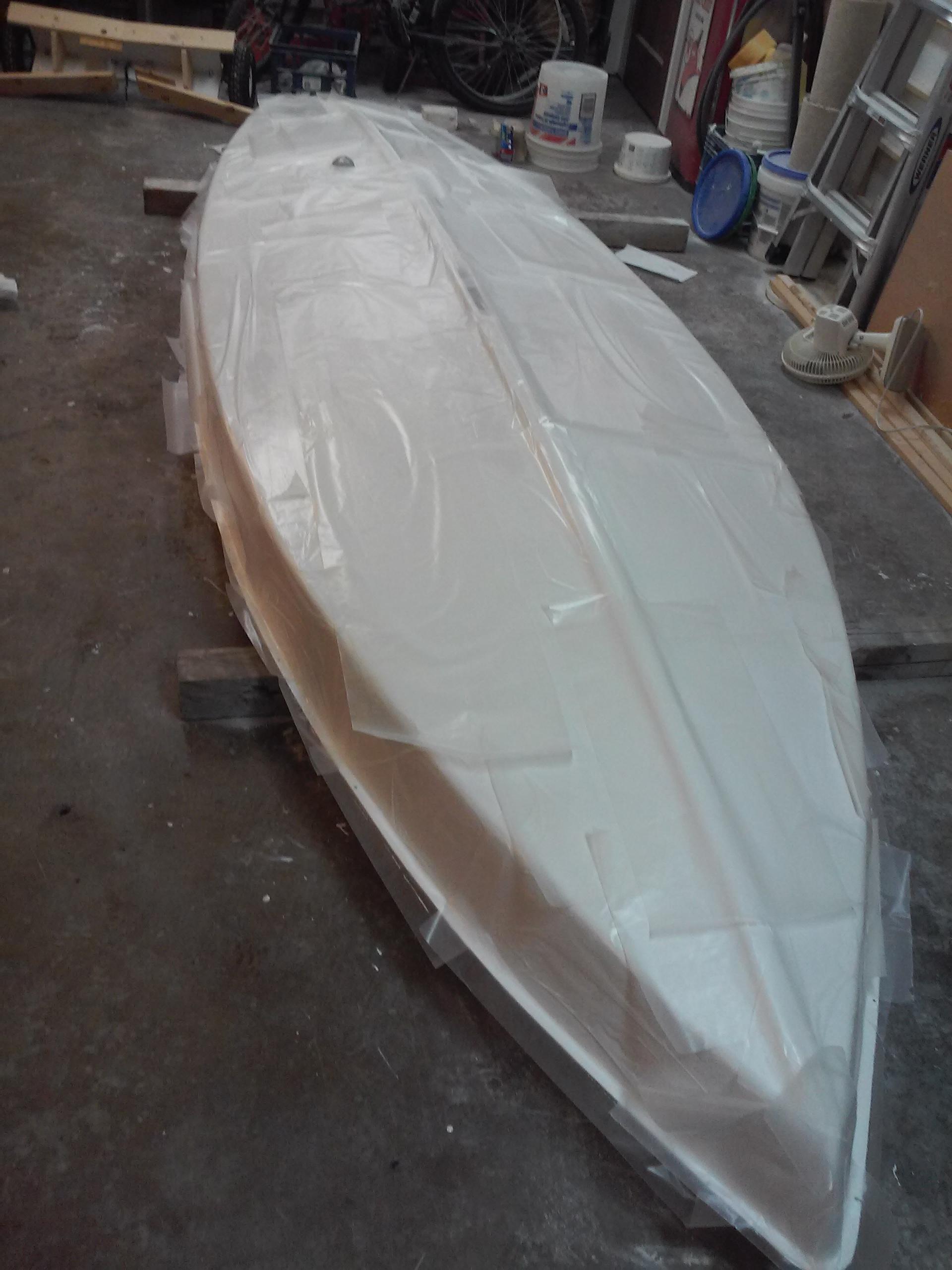 A new box of wax paper with 75 square feet is almost enough, had to run to the store for a second box. I left the wax paper in place until the following evening (30ish hours after final coat) when I removed it, the gelcoat was mostly cured. It was difficult to apply smoothly, some areas had wrinkles, if there was air in the wrinkle it was still tacky. The sides were still kind of wet (sticks to your finger when you touch it, as opposed to a clean finger tacky feel with the first two coats). I pulled off the wax paper, mostly it removed nicely. In the places where the gelcoat was still wet it was messy. I used the same wax paper just turned it over and reapplied to the areas that were not completely cured. Another 24 hours later the gelcoat had completely set. But is is not smooth. I had anticipated some sanding because I used a brush, but this is far from just some brush marks. Applying the wax paper to such a larger area (with a liberal application of profanity) resulted in a very uneven final surface. 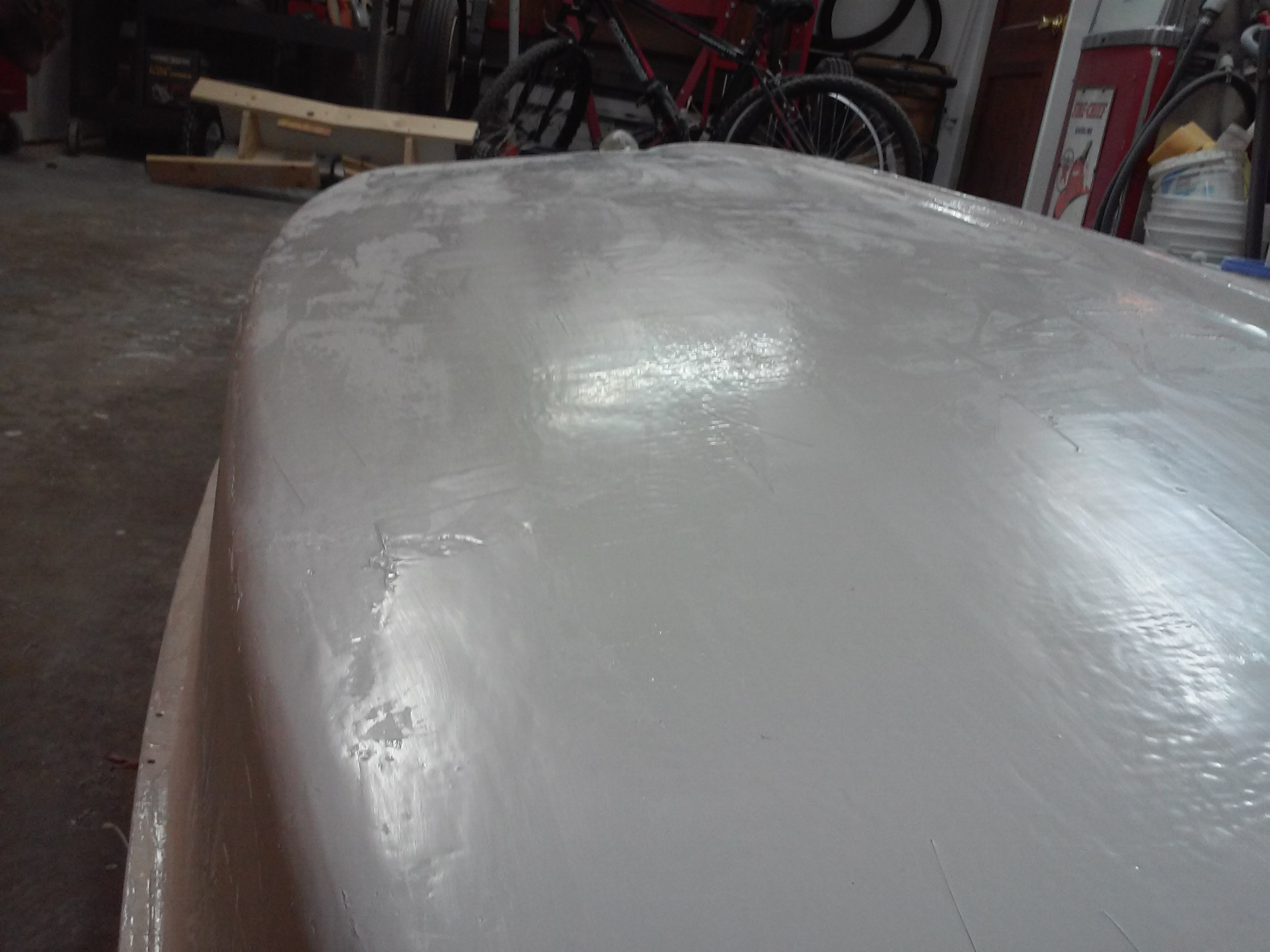 While the bottom is poor, the edges and sides are really bad, It looks like a first attempt to apply mud on drywall. 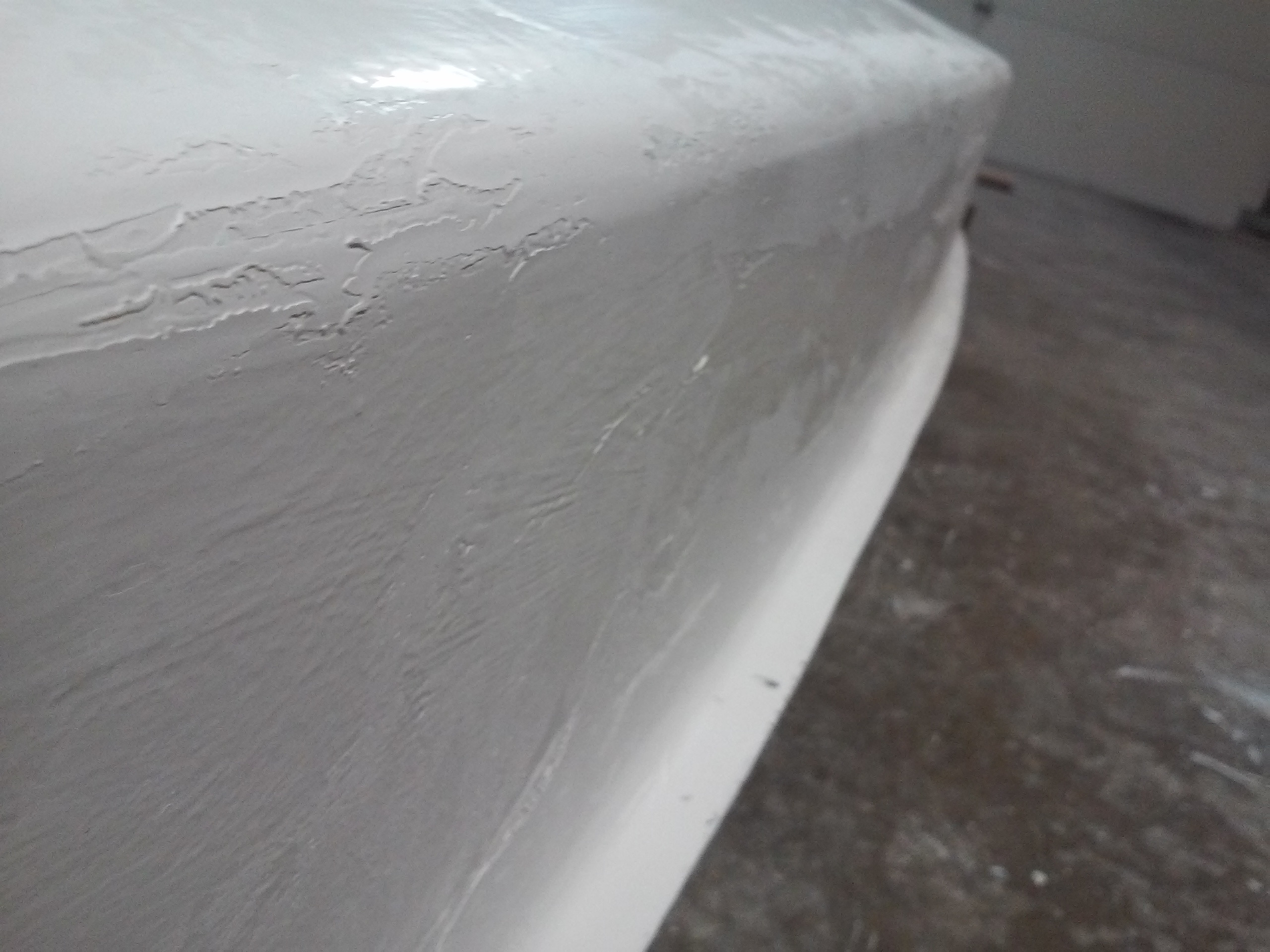 It is winter now, and the boat is going outside, so the car can come in, it will be spring before I begin sanding the hull and considering the application of another layer of gelcoat to make up what I am going to have to remove to make it smooth.

What can I do next time to get a better cure, and smoother final coat in this DIY project?

P.S. This is all polyester so it rules out amine blush as potential cause of issues.

The trouble with hardening is usually insufficient hardener in the mix, though it's possible you've got a high temperature or very slow drying gelcoat.

Getting a perfect finish requires either vacuum bagging or release film. I don't know exactly what this stuff is in terms of material but it's a plastic sheet layer that doesn't bind to the gelcoat or epoxy as it dries and leaves you with a good smooth finish if used properly.

I'm not usually a fan of explanatory videos as people spend an hour showing you a 10min job, but this one goes with the product in question and spends 10mins showing you a 2 hour job (as well as being a good demonstration on how to fix our competition boats).

Getting a gel coat to harden properly is "Glassing 101" stuff. You need to eliminate oxygen for a complete cure but covering it with sheet goods (cellophane, etc.) is certainly not the only way, and in your case not the best way. If you want to maintain the smooth surface you worked to create, just spray it with PVA mold release*. It's labeled for such use. That will even cure a gel coat with NO wax in it (you said your's was supposed to have wax). I've used it to cure poly fiberglass that didn't cure completely.
I've not tried it but a liquid spray wax is supposed to work just as well, and I don't see why it would not.

I asked an older co-worker if he knew about Gel coat on FG, because he was THE dude when it came to that department of the shop. He said there are newer finishes and Gelcoat is a B*&ch to do, best to go find an old-timer who worked with it but as far as he knew "cellophaning" was the ticket to a perfectly smooth finish. And so off I went to research. What I ended up doing was a type of marine urethane I think, been years so pardon me for not giving the exact story here but what a beatutiful smooth shiny awesome paint job. Yes paint, applied with HVLP, on the fiberglass top of a tent trailer, hard and durable finish. If I remember correctly I got the stuff from a local place called Industrial Plastics and Paints. Acklands, or a body shp supply chain may have a solution. Otherwise, find someone who can "cellophane" that gelcoat. Hope this helps and/or doesnt make things worse. I do know a few 'glassers, I'll ask one of 'em and post his answer for ya. Best I can do.

OK, update, dude says sand it til smooth and polish it. Uhh, I dont know now. I'd retract everything but something in here may help another so I'm just going to leave it, sorry I couldn't help. T.

I like wax paper for repairs on boats over a small area so i can build up a somewhat thick layer of gelcoat that can later be sanded to blend with the rest of the repair. It takes a lot of patience to make it right. If I were coating a full boat bottom I would use a good marine paint, with the proper primer, hvlp.
I have never used gel coat with wax in it. Then you can't get further layers to stick. West Marine Laminating Gel coat is a good product. Let it gel for a while, then spray a mold release like Rexco partall coverall film over it. This product is fantastic at creating the barrier, and washes off with water when the gelcoat is fully set. Even the tiniest amount of water vapor in the air prevents gelcoat from hardening.

14
Outrigger and/or leeboard when sailing a canoe?
6
In a boat repair, what would cause Gelcoat not to harden?
4
Is amine blush only a concern with new/ongoing epoxy repairs?

19
How should I check that the anchor is secure when I anchor a small yacht off unfamiliar land?
7
Anti-theft tracking device: how to configure it to deal with the battery?
6
In a boat repair, what would cause Gelcoat not to harden?
4
Is amine blush only a concern with new/ongoing epoxy repairs?
3
How much gelcoat should I remove before redoing the entire hull?
9
How to get a beached pontoon boat back into the water?