Why does the 528 thickness lines only appear on weather maps in the future?

I've been learning about snow forecasting in the UK. I've learned an important feature is the atmosphere thickness, specifically the 528 line:

Pressure decreases with altitude, and thickness measures the difference in height between two standard pressure levels in the atmosphere. It is proportional to the mean temperature of this layer of air, so is a useful way of describing the temperature of an airmass.

Weather charts commonly show contour lines of 1,000-500 hPa thickness, which represent the depth (in decametres, where 1 dam = 10 m) of the layer between the 1,000 hPa and 500 hPa pressure levels. Cold, polar air has low thickness, and values of 528 dam or less frequently bring snow to the UK. Conversely, warm, tropical air has high thickness, and values in excess of 564 dam across the UK often indicate a heatwave.

Taken from the UK met office

Looking at the detailled pressure forcast I can see this line isn't there today or tomorrow morning: 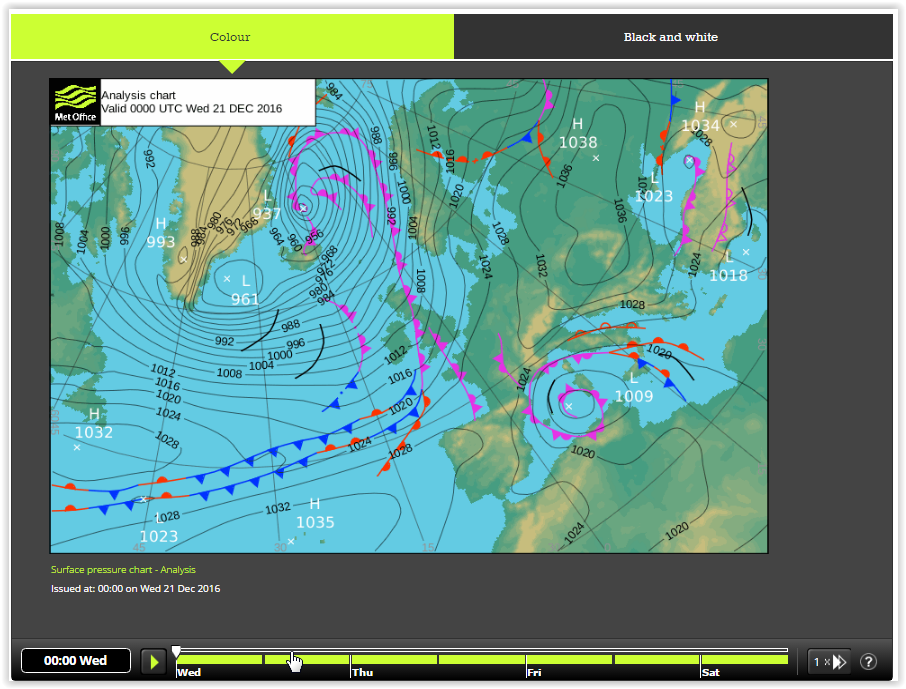 But if I scroll the bar to tomorrow afternoon, it appears: 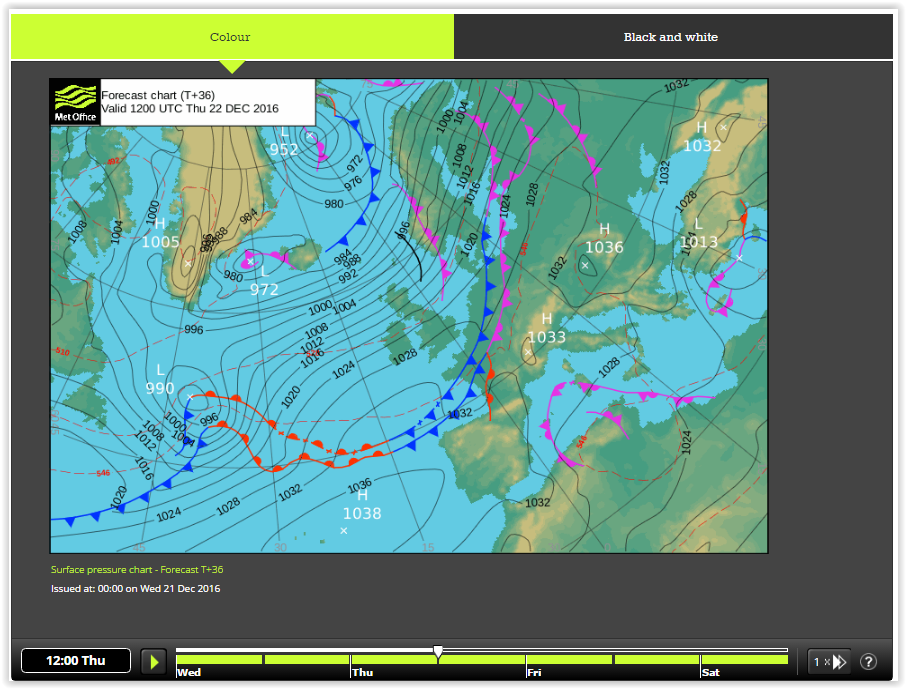 Am I missing something here? This seems to be consistent when I've been checking this though the week. Why does this forecast only appear in advance?

I'm defineatly not imagining this, the line that appeared 22nd Dec in the above images is now not there until 23rd Dec.... I don't get what's going on here?

At least in the US forecast models do change. In unsettled air they change faster. Two possiblies come to mind for why this line would "disappear" or move to another day. Both are kind of related.

In the US, the weather office has certain threshold that must be met before they can make certain types of predictions. Depending on the type of input to the forcast models as the time approaches the certainly of a particular event changes.

Here some stations need to make hourly (or more often) observations and others might only update every 4 hours. Weather balloons for upper air checks are every 12 hours.

You should contact the MET and see if they offer something like "Forecast Discussion" where the meteorologists involved write about the forecast and their results from different models.

This example is from the weather office which services the area I live in. It also has a historical component so you can see the last few days of forecasts and how they have changed.

As Baseball great Yogi Berra once pointed out, "Predicting the future is hard because it hasn't happened yet."

Speaking to one of the Meteorologists at RAF Shawbury, UK, the omission of the lines from current / near future charts is a legacy of when the charts used to be published in UK newspapers. As far as the general public were concerned they were considered unnecessary clutter.

The thickness lines On the FSXX charts show average temperature between the layers - 1000hPa and 500hPa (~18000ft/5500m). That's a deep chunk of the atmosphere.

1. Not all slabs are the same. It's possible to have an identical thickness value by having a) 1 slab with smoothly-changing temperature characteristics, or b) another with 2 very different layers in the slab - 1 cold air and 1 warm.

Of course the depth of the layers would need to be such that the mean temperature value is the same in both layers.

2. The depth of the slabs is important. (Using random figures just for ease of illustration - don't quote these!)

If you had a 60% deep slab of cold air (at say -10C), on top of a 40% deep slab of warm air (say 06C), then the thickness may come out to be 528hPa. Snow however would probably be confined to higher ground, because the snow would melt passing through the warm air, and you might expect rain at sea level. If you had a 80% slab of warm air (say 06C) and a 20% slab of air beneath it (at -8C), then that too might give a 528 thickness, but snow or freezing rain might fall to sea level in this case.

In order to get around this, forecasters don't just use the 1000-500hPa for snow forecasting - it's too coarse. They also use the 1000-850hPa thickness (calculated separately and so isn't on the FSXX charts). 850hPa (~5000ft/1500m) is a shallower depth of atmosphere and is closer to sea level, so is better for distinguishing between rain and snow low down.

So, the 1000-500hPa thickness is a coarse measure of mean temperature. For the first 24-48 hours, we expect forecasters to know what's going on, to a considerable degree of accuracy. The 1000-500hPa is not accurate enough to use in anger for the next 2 days, so forecast centres don't bother putting thickness lines on the early charts.

What it does well, is it can be used as a good marker for a cold airmass versus a warm airmass - so you can easily watch an Arctic plunge sweep southwards - and the 528hPa line gives you a 50% chance of snow at sea level (so higher than 50% for hills/mountains) - or a tropical heatwave extend northwards.And that's often all you need to know 3,4,5, days ahead.

59
How does water depth affect swimming safety? Why do signs, especially in the UK, say "DANGER: deep water"?