Are there fish in lakes with a lots of glacial flour?

Often times in high alpine lakes you will see lakes like this, 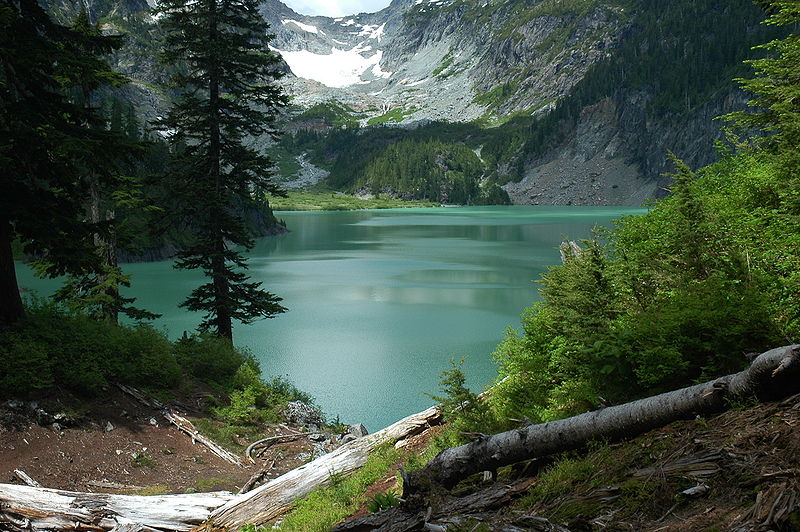 where the color comes from the rock/glacial flour suspended in the water.

The lakes and sometimes even streams are very pretty, but if one wanted to fish there, would there be any fish or would the amount of rock flour in the water prevent this?

Oh there are lots of fish in there.

I grew up only 70km from the glacier that feeds the Elk River, and I've spent a lot of time up at the lakes just below the glacier. In the winter, the water is crystal clear, the clearest I've ever seen in my life. After spring run off however the water turns grey with all the limestone rock flour from the mountains, and it stays that way almost all the way through the summer, then it goes green.

Fishing in those lakes at those times is almost pointless if you're fishing with a cast and lure. The fish just can't see the lure through the murk. Ive been fishing with fish jumping all around me in those lakes and not so much as had a bite. Fly fishers have more success because their fly leaves a shadow on the water, which can be seen from below as a dark spot in the light on the surface, and the fish recognize as food.

Most all lakes in the mountains are stocked with fish, that much is true for the Canadian Rockies at least.

The flour actually does more to help the fish in those lakes than it does to hinder them. In mountain lakes fish are primarily preyed upon by raptors, bears, otters, and other critters. In the turbid waters the fish are safely concealed so they can't be spotted by predators. People out here will actually dye their private ponds so the fish can't be seen to protect them from birds of prey. If they don't then the eagles and hawks will snatch all the fish out of their ponds in no time.

Rock flour does not seem to be much of an impediment for fish living in rock flour alpine lakes.

Lake Louise for example is known as the Lake of the Little Fishes:

Lake Louise, named Lake of the Little Fishes by the Stoney Nakota First Nations people, is a glacial lake within Banff National Park in Alberta, Canada. It is located 5 km (3.1 mi) west of the Hamlet of Lake Louise and the Trans-Canada Highway (Highway 1).

The emerald colour of the water comes from rock flour carried into the lake by melt-water from the glaciers that overlook the lake. The lake has a surface of 0.8 km2 (0.31 sq mi) and is drained through the 3 km long Louise Creek into the Bow River.

The question here seems to me would be one of elevation. This article (7 Must-See Alpine Lakes Near Durango) states:

The lower elevation lakes are home to fish and aquatic plants and as a result are not a vibrant jewel tone. They are no less beautiful and should be explored for their scenic merit as well.

Not the answer you're looking for? Browse other questions tagged fishing mountains lakes or ask your own question.

16
How do I catch fish with fish hooks but no bait?
16
What are some alternative ways of fishing - i.e. catching fish?
10
What are the best practices to ensure survival of catch and release fish?
9
Easiest way to preserve a fishing catch - with cooking or pickling
11
Can overexertion cause AMS (Acute Mountain Sickness)?
7
Fish aren't biting, how to get more bites?
8
Can ocean/saltwater fishing gear be used for freshwater/lake fishing?
4
If you are stranded at sea with a basic set of fishing equipment, how reliable of a food supply are fish?
2
Can I preserve a freshly caught fish with a soft bag cooler?
4
Looking up fish species by body of water and vice versa