If you hear a mountain lion screaming, how close is it?

Female mountain lions will scream to attract a mate, and males will do it as well.

Given how loud it sounds, would there be any way of estimating how far away the mountain lion is?

There does not seem to be much information over the net on the distance one can hear a mountain lion, but I did find this little tidbit:

The frightening puma scream is the long range call. It has been described as like a high pitched and short roar of one of the big cats.

Then there is the shrill whistle like call. This call has been used by a tame puma after she received a bit of food after the person called her over. The person described the sound as a high pitched, cheeping, whistle. It can travel a good distance (300 yards).

The same whistle call has been heard by researchers in the mountains of New Mexico between members of a family group and up to 300 meters from each other. The whistle would seem to vary between pumas. Mountain lion sounds are varied and some others are that have been heard between males and females are: a low gargling growl, throaty yowls and squeaks. The squeaks and growls traveled about 50-100 metres while the yowls traveled 200 meters. - Mountain Lion Sounds 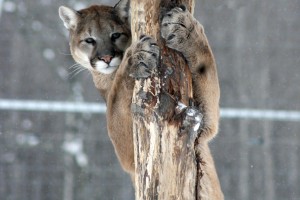 NOTE – Cougars (also called pumas, mountain lions, catamounts, Florida panthers, painters, ghost cats, etc) are considered part of the lesser/small cat classification when it comes to their ability to purr and not roar. - Do big cats roar or purr - or both?

14
Solo-backpacking in mountain lion country
5
How would you protect yourself from Rocky Mountain Goats?
34
When back country camping, how do you avoid being attacked by a mountain lion in your sleep?
5
Is there any statistical evidence that hunting reduces the likelihood of mountain lion attacks?
2
How to find and identify mountain lion tracks?
3
What animals have paw prints similar to a mountain lion such that the absence or presence of claw marks are the most reliable distinguishing feature?
4
How to estimate the size and or gender of a mountain lion from its tracks?
2
Was the young cougar who attacked a runner recently in Colorado likely to have been old enough to live independently of its mother?
4
How can I tell if there's a camouflaged octopus in a coral reef, so I can keep from disturbing it?
4
How are mountain lion populations estimated?