What is an ice circle, and how does it form?

I've seen ice do a lot of strange things, but I've never seen it do this before: Ice Circle spinning on Middle Fork Snoqualmie River (Vimeo). 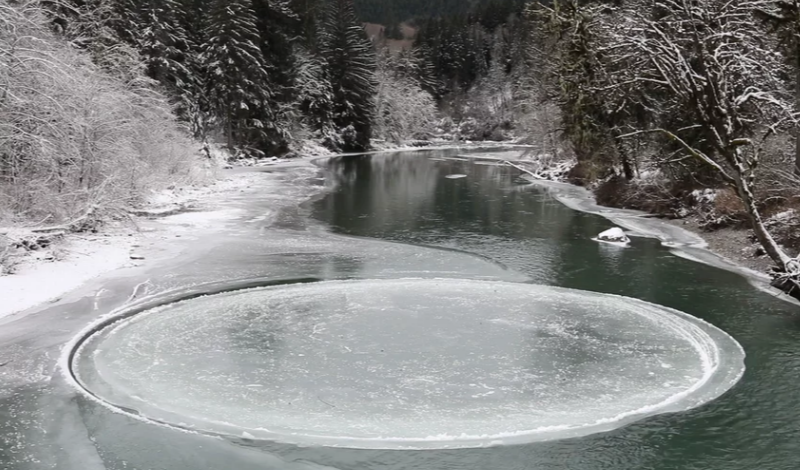 What causes ice circles to form?

That phenomenon is called an ice disc or ice circle. It occurs in slow moving water in cold climates.

Ice discs form on the outer bends in a river where the accelerating water creates a force called 'rotational shear', which breaks off a chunk of ice and twists it around. As the disc rotates, it grinds against surrounding ice — smoothing into a circle.

This particular ice disk (from your video), was formed because there was a certain climate which is perfect for such phenomenon to build.

"Calm winds this week combined with 6 mornings in a row in the low 20s made for perfect conditions to form the circles," said Q13 Chief Meteorologist Walter Kelley.

Why is it so rare?

The occurrence of such are absolutely rare since you have to face perfect really specific conditions (water, climate, river etc.).

Ice circles or disc are a relatively uncommon phenomenon. One of the earliest recordings is of a slowly revolving disc spotted on the Mianus River in 1895.

An unusual natural phenomenon, ice disks occur in slow moving water in cold climates and can vary in size, with circles more than 15 metres (49 ft) in diameter observed.

Not the answer you're looking for? Browse other questions tagged rivers ice or ask your own question.

20
How can I tell if a natural snow-bridge is safe to cross?
13
How to anchor a raft on a river
17
How do you survive getting towed under a log jam?
10
Bald eagle vs. vultures?
8
Long term autonomous winter expedition northern Quebec/Labrador: Advices/questions
10
Self rescue procedure when falling through ice, but the ice keeps breaking
11
How to cross rivers or streams at night or in darkness?
6
What is this raised, icy-looking structure, found at the edge of a partially frozen lake?
4
Bathing outdoors in low temperature, high altitude environment