How exactly do you cut down a tree with fire?

If I wanted to use fire to cut down a tree how would I accomplish this safely? Clearly if I build a big bonfire at the base of the tree it will burn down and possibly cause a forest fire.

Unless you are building a bridge you don't.

If you don't have the tools to cut it down you don't have the tools to do anything with it once it is down. You are converting it from a big living standing tree to a big dead laying down tree. Neither of which you have the tools to modify. The only scenario where this adds any value to your life is if your life depends on crossing a river and you can make the tree fall across the river or gorge. Which would require a tree close to the river that is tall enough to span the gap. As pointed out in Erik's answer, even when the tree falls it may or may not fall according to your plans. Once it hits the ground it is going to bounce and the bottom of the tree may end up several feet from the stump, which could be over the edge of the gap you are trying to span.

All of the above aside, it takes a lot of fuel and a lot of time to actually burn through a tree. Back in my homesteading days, there was a large stump in my front yard. I had a chainsaw, pick, axe and endless supply of scrap wood from a local mill. The stump was about 8 or 10 feet tall, and 6 or 8 feet wide. An old growth Douglas Fir.

Most old growth Douglas-fir (Pseudotsuga menziesii) range in height from 200 to 250 feet, and have a diameter of 5 to 8 feet. source

The first year, I cut the top of the stump off and split that into small pieces to use to burn through the stump. Around the second or third year I got access to the mill scraps. Burning through this stump was my hobby; while I didn't work on it everyday, I worked on it several times per week. If I was out doing something I would rekindle the fire. As you can see in the image, a small fire is eating through the tree trunk at ground level. It leaves a little overhang which I would split off occasionally and use to fuel the fire.

The picture below is years into the process of burning through the trunk of a tree that was maybe 250 feet tall when it was alive. Early on I hit some sap veins which helped fuel the fire, and allowed me to burn into the center of the trunk I could have 2 or 3 small files burning inside, while I was inside the trunk.

Burning through a tree takes huge amounts of good quality fuel. I can't even begin to guess how much wood I burned in little fires eating their way through the trunk. If you measured in truck loads, it would be several. 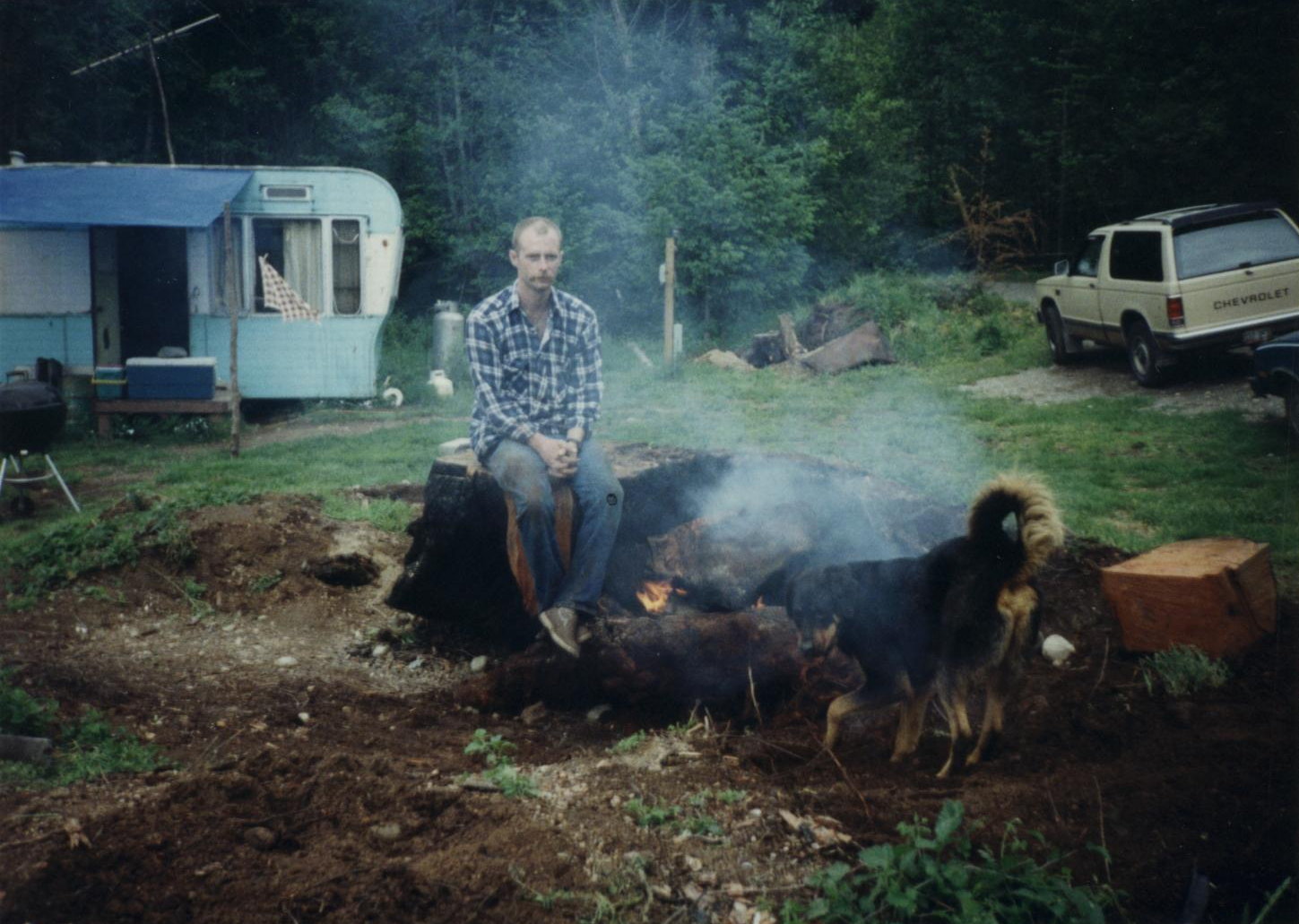 The moral here, is that if you have visions of burning a tree down to use for fire wood, you are going to spend more time gathering more fuel to get the tree down then you will gain in fire wood once it is down. Then you will have to gather more fuel and build more fires to burn it into pieces you can move.

P.S. A big bonfire does not burn through a tree trunk. It does not transfer enough heat to the tree to consume it.

How? So I told you all the reasons it is impractical for most of the common reason you would want to fell a tree. But what if you really did need to spend the time and energy required to fell a tree and fire was your best tool?

Make extremely sure the tree is not hollow. Or you will have a huge Timber Tote Fire Log.

Clear the lower branches, all around the tree. Give yourself room to work. Most bark is a natural fire retardant; remove the bark around the base of the tree, all the way around. You only need to clear it a foot or half a meter up. This will kill the tree and help to dry the wood. Inspect the base of the tree, and clear anything that is growing for 3 feet or meter around. Look which way the tree is leaning: that is the way it is going to want to fall. Wherever the widest gap is between roots on the side it is leaning to, dig out some dirt around the roots. This is where you are going to build your primary fire.

Peel the bark off of the roots and build a small fire in the hollow between the roots. Think of it as little oven. You start baking the roots/tree stump and the dirt. The trunk and roots are full of liquids; progress is going be much slower then you think. As the fire burns it will char the wood and dry out the dirt. As the dirt dries out it becomes easier to remove, allowing you to get a fire around the roots. You just keep digging (dirt and charred wood) and burning until you get well under the tree. You don't want to go deep, just a couple inches, but you need to get through the to the center. AFTER you get a bit more then half way through the side it is leaning towards, you do the same on the other side. This is the second cut (same as tree felling) that allows the tree to fall on towards the side you hollowed out in the first step. It will be more likely to fall the way you hope, if you leave a hinge on both sides. Don't work all the way around like a beaver, or Murphy will have it landing exactly were you least expected and can least afford it to land.

Restating: a small fire is best. It is going to be slow going, and you're going to be tempted to stack a bunch of wood. But flames more than a hand high from where you are working is just waste.

According to this resource one technique is to cake mud on the tree trunk at least 2 inches thick and 6 feet tall. The mud will protect the flames from spreading up the tree. Throughout the whole process it is important to keep an eye on this mud, and replenish it as needed. Remember your goal is to fell a tree not start a forest fire.

Once the tree trunk is protected you build a small fire up against the trunk of the tree on the side you want it to fall. The basic plan is to allow the small fire to burn for a little while. When the flames die down you knock the charred wood off the tree trunk. As you repeat this process the fire should burn a wedge into the tree analogous to the wedge you'd cut with an axe or a saw. Once the tree becomes unstable they recommend building a fire all the way around the base of the tree.

It is important to note a couple of things. Firstly, cutting a tree down with fire carries significant risks to yourself and the forest. Only use fire to cut down a tree if you can't use an axe or saw, and be careful. Secondly, like they say in the article:

Felling a tree with fire isn't as predictable as the good ol' axe method so as soon as you hear the wood begin to split..GET OUT OF THE WAY!

Yes Grasshopper, Burning a tree down, is one of the most entertaining things I do in my woods. Forgive the assumptions and the judgements of the naysayers. They know not, that they know not. This is how I burn a tree down, thank you to the Emersld Ash Borer (often because it’s too risky to cut it down, as the top breaks off, and flips back to the stump, screaming the whole way “I’m going to crush your skull”) Get a nice sharp chainsaw and make a 4 plunge cuts completely through the trunk. Make each cut about 1 foot vertically. Next, sprinkle a tad of diesel fuel into each of the slots. Then get a blow torch and light each slot. Retire to safe distance, enjoy your beverage of choice, and grill a burger. It’s as much fun as you can have in the woods with a dead widow maker. A few notes: this works for dead trees only. I’ve never tried it on a green tree. If the tree is large sometimes 6 or 8 vertical slots work better. Best to do when ground is wet and there’s no chance of a forest fire. I would NEVER do this in a pine/spruce/fir forest. A light breeze helps to stoke the fire. I’ve avoided death, many times, by being 300 yards away when the widow maker explodes. Good luck. For entertainment purposes only. I am not an expert, and I don’t recommend doing this.

14
How do you boil water without a proper container?
8
How do you make a stone axe?

17
Can I heat a shelter with fire?
14
Is it safe to wear a down jacket while building a fire
17
How to deal with unethical campers?
8
How do you build a warming fire in an old barrel?
14
How to assess the likelihood of a tree falling in a forest?
6
How can I identify Woolly Adelgid on a Hemlock tree?
6
How does a tree with such an extreme curvature form?
52
How can I get a GPS location for this tree on a distant hillside?
0
Can trees be treated to deter poachers?
3
How to attach climbing holds / rungs to a tree trunk without harming the tree